When Reggie was a boy living in Washington, D.C., in the 1960s, his father was a senior member of both the Kennedy and Johnson administrations.   One of the perquisites of his father's position was that he was supplied with a car and driver for his sole use during the week.  In addition to picking my father up at our house in Cleveland Park every morning and dropping him off again at the end of the day, the driver—whose name was Henry—would also ferry my father around town to meetings, do minor errands for him, and take him to and pick him up at the airport when he traveled out of town.


When Henry wasn't attending to my father's transportation needs, he spent most of his time at the garage of the federal office building in which my father worked, hanging out with the other drivers, and polishing his car, of which he was extraordinarily proud.  And he had every right to be, because it was—in retrospect—a true beauty.  Henry drove an ocean-liner-size, black-and-chrome, four-door 1958 Chrysler Imperial.  For readers who are younger than Reggie, and who may not be familiar with the Imperial brand, it was the Chrysler Corporation's luxury marque brand and was positioned to compete directly with General Motors' Cadillac and Ford's Lincoln brands.  The Imperial's heyday was from the late 1950s through the 1960s.

In addition to driving my father around town on business, Henry and his 1958 Imperial were also available during working hours for my father's personal, non-business related use.  That included ferrying members of my family around town, too, from time to time.  My mother, MD, would occasionally use Henry's services when she went out on an afternoon's shopping trip or to a ladies' social gathering.  She would also sometimes have Henry pick me or my siblings up at school or at friends houses after a play date, at least when she was otherwise engaged. 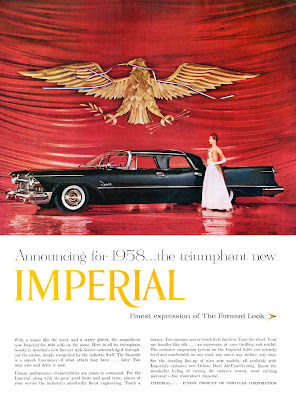 I doubt that in today's far stricter times such personal use of government property and services would be allowed, but in the mid-1960s it was unexceptional, and expected.  It was, in reality, the norm for quite a few of the children that I went to school with and played with, many of whose fathers were also senior government officials or appointees.  Having a car and driver available to these men and their families was part of the package.

In the fall of 1966, when I was ten years old, I got carried away by having seen a Disney movie called "Almost Angels" about the Vienna Boy's Choir that was shown on Walt Disney's Wonderful World of Color, and I auditioned for and was accepted into the Washington National Cathedral's junior boys' choir.  This required attending the choir's weekday practice sessions and Evensong service performances in the Cathedral's Bethlehem Chapel.  Although the Cathedral's campus was but a few blocks from our house in the Cleveland Park neighborhood of Washington, my attendance at the choir's rehearsals and services was complicated by the fact that I was enrolled in a country day school in Virginia at the time, about a forty minute's drive away.  On the days when the choir was not in session I took a school bus to and from the country day school, but on the days when the choir was in session it required that someone pick me up at the school in the mid-afternoon and deliver me to the Cathedral's campus in time to attend the choir's sessions.


At first this task fell upon my mother, who came and picked me up on the two afternoons a week that the choir was in session.  However, she soon began to chafe at this commitment and decided that it would be far more convenient and preferable for Henry, my father's driver, to pick me up at the school and drive me to the Cathedral's campus instead.  As a result, Henry and I came to know each other rather well.  Henry called me "Master Reggie" and I called him, well, "Henry."  This was, after all, the mid-1960s, and south of the Mason Dixon line.

I enjoyed being picked up at the school by Henry in the Chrysler Imperial and driving into the city and to the Cathedral campus in the large, shiny black car, sitting in the back seat wearing my school uniform and talking with Henry in the front, who would be wearing his uniform of a black suit, white shirt, black bow tie, and chauffeur's cap.  That is, until Freddy Fonsworth, a rather mean-spirited classmate of mine, saw me being picked up one day.  The next morning, in front of my other classmates, he loudly exclaimed that the car I was being picked up with was grotesquely old and laughably out of style, and that only a "stupid jerk" would ride around in such a car.  I felt the hot flush of embarrassment when he said this.  It had never occurred to me that the car, which was almost nine years old at the time, was so out of date versus what everyone else was driving then (this was back in the day when most affluent Americans kept their cars for no more than two or three years at a time).  But once Freddy pointed it out to me I knew immediately that he was right, and that Henry's Chrysler Imperial was an outmoded, out-of-date, fin-bedecked embarrassment.


The next day, when Henry picked me up at the school, I asked him why it was that he drove such an old car, and wouldn't he prefer to drive a newer, more modern model?  He responded, "Why, no, I wouldn't, Master Reggie, because there ain't no finer car than this here Imperial.  They don't make 'em like this anymore.  My manager keeps tryin' to get me to take a new car, but I turn him down every time he asks, because I love this car.  I don't ever want to have to give her up." 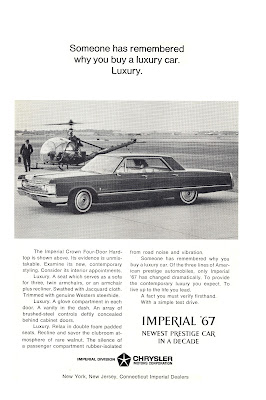 Later that evening, when I came home after choir practice, I had the following exchange with my mother:

"Mummy, why don't you pick me up at school anymore, but rather send Henry to pick me up instead?"

"Because it is more convenient for me to have Henry do it.  Why do you ask?"

"Well, I'd rather that you picked me up instead of Henry."

"What?  I thought you of all people would enjoy being driven around in a chauffeured car!  What's the matter with Henry?"

"So what's the matter, then?" she asked.

"It's that the car he drives is so old and weird looking, and it embarrasses me to be seen being picked up by it at school."

My mother rolled her eyes and snorted, and said, "For Chrissakes, Reggie, what's the matter with you?  That car is the love of Henry's life and he's very proud of it.  It's a wonderful car!  You should be grateful that you are picked up at school and driven to choir practice by Henry—like some little Pasha.  I am not going to pick you up at school simply because you are embarrassed that Henry doesn't drive a later model car.  Forget it!"


And so I did.  But I never quite got over my embarrassment at being picked up at school and dropped off at choir practice by Henry in his enormous 1958 Chrysler Imperial.  And I felt ashamed of myself for feeling that way, when Henry was so obviously proud of his car and his profession as its driver.  By making fun of me in front of my classmates, Freddy Fonsworth had succeeded in sucking all the fun out of my trips with Henry, and I came to no longer enjoy them, as I was convinced that every time I got into the car's back seat I was followed by a chorus of derisive laughter from my schoolmates as they saw me drive away in the ancient, contemptible Chrysler Imperial.

I lasted only a year in the junior choir, before dropping out and resuming my normal school-day routine and traveling back and forth to school on its regularly scheduled school bus runs.  I only rarely was driven by Henry thereafter, usually in the company of my mother or my father.  Within a year or two my father left the Johnson administration and returned to private practice, which brought to an end his days of having a car and driver assigned to him to ferry him and his family members about town.

Today, when I see school children at Manhattan's private schools being picked up by drivers after school in black shiny cars, I recall my own experience and think how fortunate I was to have been regularly picked up at school by Henry in the afternoons when I was in the Cathedral's junior choir.  And I kick myself for not appreciating at the time how fortunate I was, and that there would come a time all too soon in my life when I would only dream of having such a car and driver at my disposal.


Particularly if it were a triple-mint condition, perfectly maintained, gleaming black and chrome 1958 Chrysler Imperial, with Henry in the front seat prepared to take me wherever I wanted to go . . .

All vintage Imperial advertising courtesy of the Online Imperial Club; the vintage postcard is from Reggie's own collection.
Posted by Reggie Darling at 9:26 AM