Well, no longer.  With our oceanside holiday but a fast-receding memory, I have refocused on my life in the City and at Darlington House.  I'm back at home, back at work, and back to writing a number of essays about recent projects and acquisitions, along with other Reggie subjects, which I shall be posting in the coming weeks.  I hope that you, Dear Reader, will find them of interest. 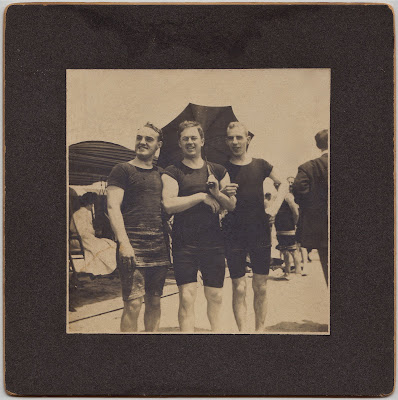 But before leaving the happy memories of the seaside altogether, I thought I'd share this photograph, taken one hundred years ago, of a jolly threesome by the shore.  I bought it more than twenty years ago at a used book store in upstate New York, where I found it while sifting through a shoebox of old photographs for sale.  I think I paid a dollar for it.  There's no identification on it of who these lads were, or where it was taken.  Given where I found it, I'm assuming they are American, and that their photograph was taken at a popular beach somewhere on the East coast.

I have always wondered, who are these men and how is it they came to be photographed?  Was it taken by a professional, roving photographer who strolled the beach, looking for customers, or was it taken by the fourth of their foursome with a newly available portable camera?  Are they straight, or gay, or a combination?  What accounts for their wildly differing physiques?  Whose umbrella is that?

These are such questions that one often ponders when studying photographs of unidentified people taken long ago.  One blogger who posts such pictures regularly, and whom I read regularly, is JCB.  I encourage you to look at her charming blog if you haven't already.  The photographs she posts, both old and new, are lovely and thought-provoking.

I believe my photograph is of three friends, enjoying each other's company at an outing at the beach.  Two of them appear to be athletes, or laborers, given their muscular physiques, while one is clearly a stranger to strenuous exercise.  I suspect the two fit ones are athletes as opposed to laborers.  Who knows if they are gay or straight?  I could talk my way into either conclusion.  The fact that one of them playfully holds a black silk umbrella argues that the photograph was taken by a fourth, more fully-dressed person who made up their foursome.  For I suspect the umbrella belongs to the photographer, whose hands would have been occupied by the task of taking the photograph.  And unless the person taking it was the wife of one of the subjects, it is unlikely that the photographer was a she, since it would been considered inappropriate at that time for a single woman to be unchaperoned under such circumstances.  Whatever the story may have been, this is a charming photograph of three young men enjoying themselves, and having a lovely time.  It is a favorite of mine.

Over the years I have collected several hundred old photographs of unknown sitters, unrelated to me.  I seek out photographs in which the subjects are interesting looking, or good looking, or have unusual or remarkable features, such as in the cabinet photographs I featured in my recent post on mustache cups.  I also look for ones, like this, where the subjects just might be gay, like I am.  While I have plenty of photographs of my actual ancestors, none of them--to the best of my knowledge--were gay.  If the men in this photograph were, then they are ancestors of mine of a different sort from those with whom I share an actual bloodline.

Tell me, do you collect old photographs of people long gone?  And, if so, why?
Posted by Reggie Darling at 9:20 AM