The Fireboards of Darlington House

When Darlington House was built in 1817, burning wood in fireplaces was the primary method for heating houses in this country.  Not surprisingly, there are a lot of fireplaces at Darlington--six of them inside the house, and another one in an outbuilding.  Within a decade from when the house was built, iron stoves supplanted fireplaces as the preferred source of heating in America, and all of Darlington's fireplaces were refitted with stoves.  It was not until 1931, when the Proctors bought the house, that central heating was installed.


When we bought Darlington in the late 1990s, only three of its fireplaces were operable, and only one of them was safe to use.  We have since opened up and lined all six of the fireplaces' chimneys, and today all of them are in working order and up to code.  It was a monumental, lengthy, dirty, and very expensive undertaking.  But now we have the pleasure of six working fireplaces.  And we use them when the weather is cold, as can be seen here, here, and here.


While a fireplace is attractive when a fire is burning within it, or dressed with logs when one is not, it is not so fair when it is empty.  During the winter we lay logs in the fireplaces when they are not in use, to be ready for the next time we light a fire, but during warmer weather we leave our fireplaces empty and swept clean of ashes.

But our bare hearths and empty andirons looked rather forlorn during the summer months, so I thought it would be a good idea to cover them during the off-season with fireboards, as was customary when Darlington House was built.  The question was, what kind?


I wasn't of the mind to have ones made and painted with naive scenes of country villages or hunters on horseback.  While I like living in an antique house, furnished sympathetically, I don't aspire to living in a folk-art collection or a house museum, which is what such fireboards bring to mind, at least to me.  Furthermore, modern-day painted fireboards done in a naive, folk-art manner can very quickly devolve into the realm of country cute.  Far better to have one's fireboards painted in the more modern, albeit classic, manner of Graham Rust, the very talented English artist:


But such talent is not easy to come by, and is very dear, and, besides, Reggie wasn't keen on introducing too much of a statement into the rooms at Darlington House.  It's one thing to cover one's upholstered furniture with smart summer slipcovers, as we do during the summer months, but it is another matter to also introduce a different painted scene into each room's fireplace opening.

But Reggie does admit that he wouldn't have minded having at least one fireboard covered with antique scenic wallpaper, which was a popular decorative conceit in the early nineteenth century.  But antique wallpaper-covered fireboards are difficult to find, and maddeningly expensive when found.  And then there's the pesky issue of finding ones that actually fit one's fireboxes.

In the early nineteenth century, many of the papers used to cover fireboards in America were printed in France, and the panels were specifically made to use either on fireboards or as overdoor panels.

The estimable Adelphi Paper Hangings recently introduced two wallpaper panels in a document pattern, Cupid and Psyche, circa 1795-1810, that may be used for papering fireboards.  However, that falls short of our needs, as we have six fireplaces at Darlington, not two, that beg for fireboards.

Considering the number of fireplaces at Darlington, I reasoned it was best to wait until the perfect fireboard solution appeared, rather than rush into an unsatisfactory and costly custom fireboard project.

So the fireplaces of Darlington House sat empty during the warm-weather months for the better part of ten years, with narry a fireboard within them.  But Reggie was not exactly inconsolable in his grief, as there were other, more pressing claims on his resources at Darlington House, the list of which was so long as to defy imagination.


Several years ago, while visiting the Rhinebeck Antiques Fair, in Rhinebeck, New York, I came across two Federal-era, louvered shutter fireboards.  Made in the first quarter of the nineteenth century, when Darlington House was built, the fireboards were in their original green-paint finish.  It took me all of ten seconds to cry "Sold!"  I was thrilled, when we brought them home, to find that they required only minimal adjustments to fit two of our fireplaces.

But what to do about the other, empty fireplaces?

After much deliberation, research, and discussion, I decided that the best solution was to have the same type of louvered shutter fireboards made as we bought at the antiques fair.  That way, the fireboards of Darlington House would be consistent throughout the house and not call too much attention to themselves, yet still provide a pleasing architectural and decorative addition to the rooms during the warm weather months.

This past winter, during active fireplace season, I arranged with our architectural historian, Isaiah Cornini, to have three new louvered shutter fireboards made.  Isaiah used the shutters that hang on our exterior windows as the template for the new fireboards. 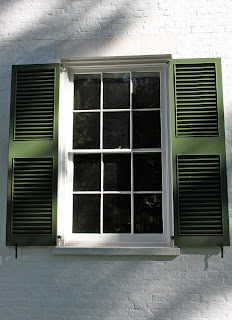 One of our early fireboards required some patching and extending to fit its designated fireplace more snuggly.


Once the panel was patched, Isaiah had a decorative painter inpaint the extensions on the fireboard to match the original paint.  We decided to paint all of the new fireboards the same grassy green that we used on the exterior shutters on Darlington.


I am quite pleased with the way the new fireboards came out and with how handsome they look in our rooms.  Here is one of them installed in our drawing room's fireplace.  I think it looks marvelous. 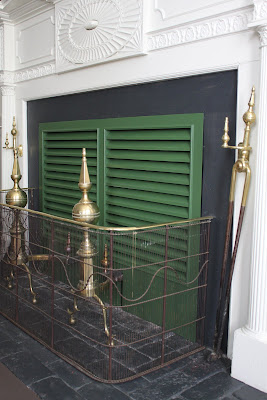 If you live in such a house as Darlington, or in any house or apartment with fireplaces, for that matter, I encourage you to have fireboards made for use during warm weather.  Not only do fireboards cover the fireplaces' unsightly empty openings when not in use, but they mark a pleasing seasonal change to one's interiors, particularly when done in concert with the covering of one's upholstered furniture with summer slipcovers, as we do at Darlington.

Tell me, how do you dress your fireplaces during the summer?

All photographs, except where noted, by Reggie Darling and Boy Fenwick

Posted by Reggie Darling at 7:23 PM