You May Call It Eggplant, But I Call It Aubergine

Last weekend Boy and I stopped by the local farmers' market in the town near Darlington, as we usually do most Saturdays when the weather is nice.  Ours is a vibrant, thriving farmers' market and a terrific source for locally grown vegetables, fruits, flowers, meats, and eggs, as well as locally made cheeses, baked goods, and delicious organic foods not found in mass-market supermarkets.  We are lucky to have such a good farmers' market nearby, and we enjoy supporting it. 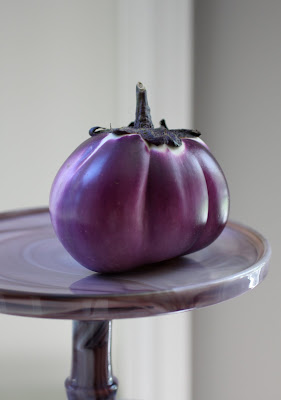 Now, I know that such markets are all the rage these days and that everyone is mad for locally raised food and all that, but Reggie isn't exactly new to this particular party, for he has shopped at farmers' markets since the one at Manhattan's Union Square--the granddaddy of all such things here in New York--opened in the early 1980s.  Reggie, of course, more than approves of the locavore movement in this country, and he strives to support whenever possible purveyors of locally sourced, raised, and grown, organic, non-industrial-food-complex comestibles.  And Reggie is thrilled with the success and momentum of the food revolution that continues to take place in this country. 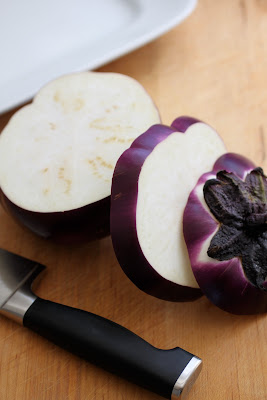 Our local farmers' market was founded but a few years ago and has grown to become a truly excellent one in the short time it has been in business.  One of the more recent additions to the market's vendors includes a seller of heirloom vegetables who last weekend offered a mound of glossy, round, deep-purple aubergine displayed on her table, the likes of which neither Boy nor I had seen before.  She said it was Sicilian eggplant, particularly good for grilling.  Of course, Boy and I call this vegetable (well, fruit, actually) aubergine, as we find it amusing and rather recherché to refer to vegetables (or in this case fruit) by the names more commonly used for them in England (one's mother country, after all), instead of on this side of the pond.  Wouldn't you much rather eat courgette instead of zucchini?  I would.  And I do. 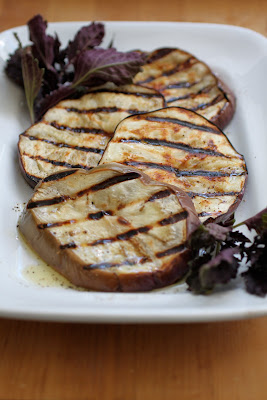 Anyway, we decided this aubergine was so gorgeous that we had to give it a try.  So we brought one home with us, sliced its creamy-white, sweet, and meaty flesh--remarkably low in seeds and moisture, I might add--brushed it with extra-virgin olive oil, and browned it on a sizzling-hot grill.  After we took it off the heat we drizzled it with just a bit more olive oil and seasoned it with a grinding of pepper and a dash of fleur de sel, and served it with several sprigs of curly purple basil, grown in pots at Darlington, that added a delicious licorice element to the dish.

I say, Dear Reader, I don't care what one calls it, I thought it was perfectly mahvelous.

All photographs (and cooking) by Boy Fenwick
Posted by Reggie Darling at 7:33 AM