The Urns of Darlington: Summer

As I have written in the past, we fill the metal urns at Darlington with new plantings every spring, summer, autumn, and winter.  And as I have also written, I plan on posting images of each of the seasons' plantings for your delectation, Dear Reader.  I've already published essays on our winter and spring urns.  Now I turn my attention to this summer's. 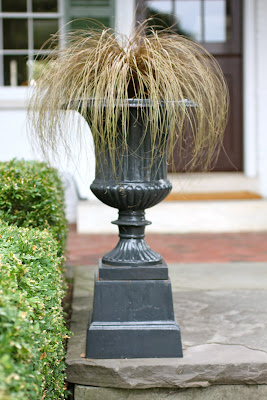 And it is a good thing that I do, since the summer is rapidly drawing to a close.  Even though we technically have more than two weeks to go before the autumnal equinox that marks the season's end, I, like many people, think of summer as drawing to a close at Labor Day.  Yes, the warm weather will linger for some time before the first heavy frost, but the rhythm of the school year beginning anew still lingers with me, even though it has been over three decades since I left the hallowed halls of academe.  And for me, the start of the new school year means that autumn has arrived. 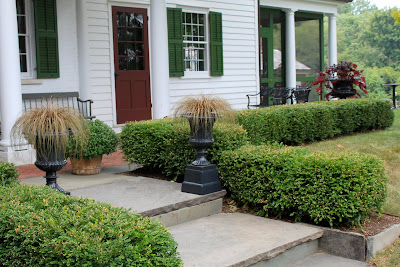 Over time our gardening at Darlington has become more restrained than it was when we first acquired the property, and this summer we planted our urns with a more subdued palette than we have in years past.  As we usually do, we planted grasses in the two urns at the entry to the house.  But this summer we planted a type of grass that we haven't before.  Named Carex flagelliferra 'Toffee Twist', it is loopier and more subtle in its appearance than the grasses we've used previous summers, and reminiscent of the plumage of an exotic bird.  I'm mad for it.  In fact, I like it so much that I am reluctant to pull it out and replace it with something more autumnal in several weeks' time.  We just might leave it in the urns this fall. 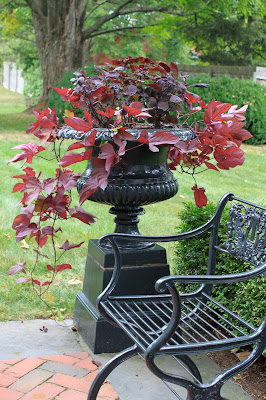 Boy planted the larger urn on our terrace with a deep purple Coleus solenostemon 'Dark Star' and trailing Ipomoea batatas 'Sweet Caroline' vine for the summer.  It makes a handsome contrast to the green of the landscape surrounding it.  Fortunately the deer did not find their way to eating the vine this year, which they have done in summers past. 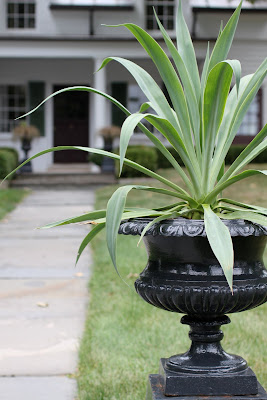 We planted a single Beschorneria yuccoides, commonly known as Mexican Lilly, in the large urn that stands at the front of the walkway to the house.  We generally choose to fill this urn for the summer with a hardy, heat-and-drought-tolerant plant, since it sits in full sun throughout the day, and its soil dries out easily.  This is a striking, noble plant, and I plan on repotting it to over-winter inside the house.  I've had good luck doing so in the past, and I hope this will flower during the winter, as several others have.

And with that, Dear Reader, you have Darlington's urns in all their summer finery.  Please stay tuned for the next installment in this series, the Urns of Darlington: Autumn.
Posted by Reggie Darling at 7:51 AM