Reggie's Advice For the Tongue-Tied Guest at Table Amongst Strangers

The other day Reggie received a telephone call from a lady friend.  A charming, game gal with a swell sense of humor and great style, she is at ease and in her element in the elegant drawing and dining rooms of what is left of society, the waters in which she and her dapper husband swim effortlessly.  They are a sought-after couple in the county where Darlington House is situated, where they spend the warmer months of the year in one of the great and important houses.  And they are a fun and interesting addition to any party or dinner table.  I like her, and I always look forward to seeing her when our paths cross.


She was quite exasperated when she called me.  "Reggie," she said, "I've got to ask you to write about something on that blog of yours.  Last night I sat a table at yet another benefit, and neither the person on my left nor on my right knew how to talk to me.  It was like pulling teeth just to get them to say anything.  After two inteminable courses of grunts and monosyllabic answers to my questions, and not a single one in return, I finally just got up and left.  I couldn't take it anymore!  Why do these people go to parties if they can't--or won't--at least do their dinner partners' the decency of talking to them?  Would you please write about this on your blog?  I think your readers would be interested to know what you have to say about this."


Of course Reggie was rather flattered that such a lady as my caller would ask his opinion and think that he might even have something to say on this matter.  And since she did, he does.  For this is a subject that Reggie has given considerable thought to over the years.  Namely, how does one navigate the waters of social intercourse when one finds oneself at a table, adrift amongst a sea of strangers?  And, in particular, what does one talk about under such circumstances? 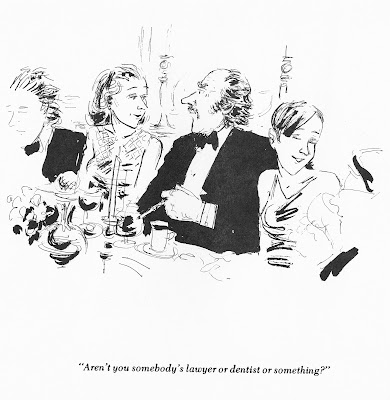 The answer is it is remarkably easy to start the juices of dinner party table conversation running, Dear Reader, and then keep them flowing for as long as one is at table.  It really only requires the most minimal of effort.  To start the conversation one need do nothing more than be a good asker of questions, and a good listener.  And then once the conversation has begun, it is easy to keep one's dinner partners engaged in pleasant banter throughout the meal by volunteering bits and pieces of information and one's opinions in response to one's dinner partners' comments, all with the goal of eliciting additional pleasant conversation for the duration of the meal.  But like many simple things, Reggie believes that achieving success at such intercourse requires effort, practice, and a willing audience.  Just as it takes a chef years to master turning out a perfectly roasted chicken every time he is asked to do so, it takes practice to become a good party conversationalist under all circumstances.


For when one accepts an invitation to a party, whether large or small, private or public, one enters into a contract to perform at said party appropriately.  And that means playing ball with the other guests.  No, not literally--unless the party is a tennis round robin--but figuratively, where the game played is one of wit and verbal volley.  And that means keeping the conversation going.  Just as many a party is helped along by the flow of spirits, so is it aided by the ready flow of conversation.  And the responsibility of a guest to keep the conversation going is a broad one.  It does not apply only to intimate private parties where the guest list is carefully chosen, and where conversation often runs freely as a result, but it applies also to more public gatherings, such as large benefit dinners, where one can find oneself assigned to sit at a table surrounded by strangers. 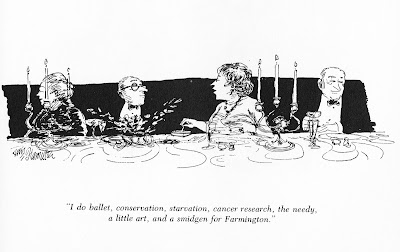 But if one is not as facile as Reggie or his lady caller are at instigating and carrying on such conversations (Reggie can converse with a door knob, if required), one shouldn't be content to just sit there quietly, either, waiting for others who are better equipped to do so to start and then keep the conversation going.  One must gather up one's bespoke britches and stride forth into the conversational maelstrom, leaving one's cautions and inhibitions behind to gather dust amongst the wreckage of dinner parties past.  For a dinner party--and I'm including benefits here, too--without conversation at table is a wreck of an evening, indeed.


To address the very serious shortfall in the understanding of those who drove my lady caller to distraction, Reggie has come up with a set of pointers and suggestions for the tongue-tied party guest to grease the wheels of conversation when he (or she) finds himself sitting at a dinner table amongst strangers.  The employment of these conversational gambits, I might add, Dear Reader, will ensure that said guest will soon find himself (or herself) at the happy center of a freewheeling and enjoyable conversation that can last the better part of an evening, and certainly through at least the several courses required in a sit down dinner. 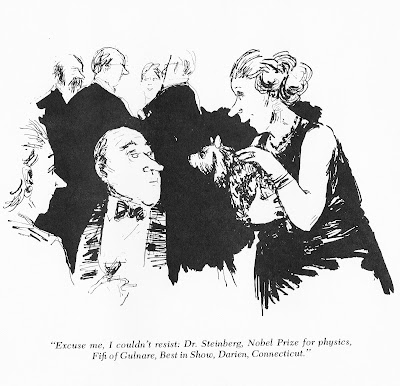 Success in these matters requires but that you ask any of these seven questions, either individually or serially:
Failing all of the above, here is a sure fire way of eliciting a response:
Reggie is, of course, joking with this suggested last question . . . at least he thinks so.


All funning aside, and with the exception of the last query, each of these are positive and leading questions that give one's dinner companions the opportunity to open up and volunteer information that can then be the basis for further questioning by the perspicacious listener.  And once your dinner partner's attention has been engaged, and the conversation is flowing, here are six further things to ask or say that ensure its happy continuation:

And failing that:
Wait a minute, that was supposed to be a joke!


Anyway, back to the subject at hand.  You will find yourself a popular dining companion, indeed, if you take it upon yourself to engage in polite conversation at parties with those on either side of you that keeps your companions wanting more, rather than less, of your company.  If, on the other hand, you just sit there, awkwardly pushing your food around because you haven't anything to say, then you really shouldn't have bothered to go out that evening.  Parties require a certain level of behavior from the guest, and that includes keeping the conversation going in a pleasant and diverting manner.  If you are not able or willing to do so, then your time (and that of your unfortunate dinner companions) will be much better spent if you stay at home, alone, catching up on--and then taking to heart--insightful past Reggie Darling posts on matters of etiquette and social comportment. 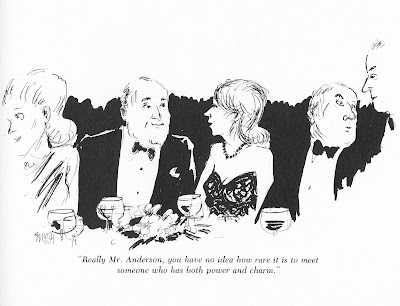 And with that, Reggie wishes to leave you with but a few more thoughts on this topic that are well worth considering:

It's as simple as that.

Tell me, Dear Reader, what are the questions and topics in your conversational arsenal that you employ when you find yourself seated amongst strangers?

All photographs from LIFE Images; all cartoons by William Hamilton
Posted by Reggie Darling at 8:45 AM