The Blossoming of Romance Under the Fascist Sky

My parents met as teenagers on a bicycle trip in Germany and Italy in the summer of 1939, on the eve of the outbreak of the second world war.  Although both of their families lived in the Detroit area, and they had friends and acquaintances in common, they had never met before.  That's not entirely surprising, though, since both of them went away to school.  That summer my mother, MD, had just finished her final year at Oldfields and was heading off to Sarah Lawrence in the fall, and my father, FD, was approaching his last year at Hotchkiss, with Yale in his sights thereafter.

My siblings and I find it remarkable that our parents were sent off to spend the summer of 1939 riding around on bicycles in the two major Fascist countries in Europe, at the very brink of war.  What were our grandparents (on both sides) thinking when they agreed to allow them to go on such a trip, and in such countries, when the storm clouds of impending war were thought to be more than apparent to even the most casual of observers?  Although staunch and conservative Republicans, neither sets of grandparents were exactly pro-Fascist in their sympathies.  But those were different times with far less information available than we take for granted today.  I highly doubt that my grandparents would have consented to send their children on such a trip if they had comprehended that Europe was at risk of exploding into war within only a week or two of the conclusion of the bicycle trip, when Germany invaded Poland on September 1, 1939.

I vaguely remember MD talking about how she recalled that Germany was covered with flags emblazoned with the Nazi swastika that summer, and that she didn't care much for that country or her time there.  Mainly I remember her saying that she was exhausted and sore most of the time from riding on her bicycle all day, and that she never got enough to eat.

My sister Camilla recently sent me a postcard that MD sent that summer to a friend of hers back home, from Venice, in which she said she much preferred Italy to Germany, particularly for its food.  I've copied her newsy missive here, below: 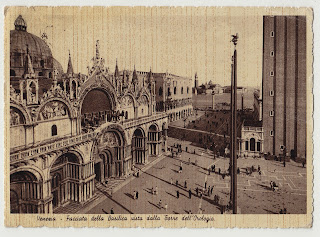 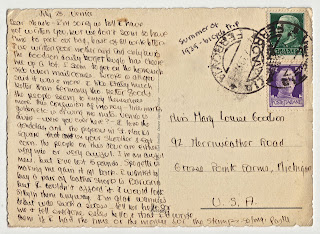 I have a knife that my father bought in Germany that summer, but I don't recall him ever speaking about the bicycle trip, only my mother.

I wish that I could ask both of them questions about it now, but I'm not able to since they are long dead.  It is interesting to me, as I write this blog and look back and ponder those that came before me, how often I wish I could pick up the telephone and review what happened with the person I am writing about, who is no longer alive to tell me the story once more, or to answer the questions that I have.

But I do recall MD telling me that it was during that bicycle trip that she began to fall in love with my father.  There were other boys in the tour group that she liked, and who liked her (such as Willard Huffstadler, shown with her in the photograph, above), but it was my father whom she came away wanting to see more of.

And since they conveniently lived near each other she was able to, at least during breaks when they were both home from school.  MD made her debut in the winter of 1939, over the Christmas holidays, and I believe my father attended some of the parties, but I don't think he was one of her escorts.  They started to date in earnest in the fall of 1940 when he went to Yale, which was but a short train or car ride from Sarah Lawrence.  And they became engaged when they were still undergraduates, after the U.S. entered the war in December 1941 with the bombing of Pearl Harbor.

MD dropped out of Sarah Lawrence to marry my father when he was drafted into the army in the spring of 1943, during his junior year at Yale.  As it was for a lot of people of that generation, they had a sense of urgency to get married in the face of the mighty conflict, and their parents--both sets of whom came of age during the carnage of the first world war--encouraged them to get married even though they were very young, not much more than twenty years old.

There was very little time to make arrangements for their hurried wartime wedding, since they had only several weeks before my father was required to report for duty.  Grandfather Darling officiated at the morning ceremony, held in the church in Grosse Pointe where he was minister, which was followed by a luncheon at one of the nearby clubs. I don't believe there were more than twenty-five people who attended their wedding, only immediate family members and the closest of friends.

As his new bride, MD followed my father to the various army bases here in the U.S. where he spent the remainder of the war (he never saw active combat), setting up housekeeping in small apartments or crowded boarding houses nearby.  And so they began their married life.  They stayed married to each other for thirty years or so, twenty of which worked, followed by ten that didn't so much.

As the youngest of their four children, I mainly recall the time in their marriage after things had started to unravel.  I vaguely remember when their marriage still worked, and when they still enjoyed each other's company, but not with any great vividness, and only through a boy's eyes.

After they got divorced MD methodically destroyed every photograph that she had that showed the two of them together, including all of the ones taken when they got married.  I was able to spirit away the photograph that I am showing here, however, which I keep in a frame on my bedside table.  It's the only one I have of them together, where there aren't any other people in the photograph.

And I hold it dear because it is a reminder that, yes, there once had been a time when they were young, and in love, and still looked forward to a happy life together until death did them part.  I see it in their smiling faces in this early photograph, taken long ago, when they were easy and comfortable with each other, and still in love.
Posted by Reggie Darling at 9:56 PM