While the majority of Reggie's ancestors came to America well before its War of Independence, his grandfather Darling emigrated to this country in 1905.  Born Francis Ambrose Longbottom Darling, Reggie's grandfather was a schoolboy of fourteen when he left England, the land of his forebears, to spend the rest of his days in America. 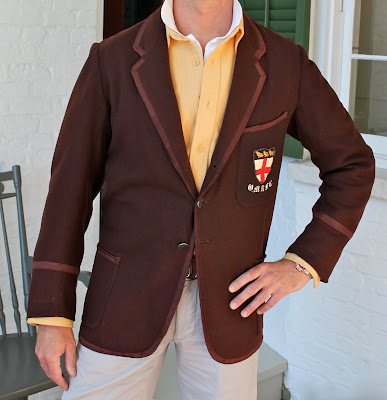 Francis A. L. Darling was not what one typically thinks of when considering the masses of humanity that emigrated to this country at the beginning of the last century.  He came from a comfortably off, upper-middle-class English family and arrived as a first-class passenger on the ship he sailed in on.  Francis was sent to live with relatives in Massachusetts because his father had been killed in a freak accident while riding in a hansom cab in London, and his mother was considered incapable of raising Francis and his sister Nanette on her own due to a propensity to dipsomania, which became chronic with the shock of her husband's untimely death.  Or so the story goes.  Interestingly, Francis' mother was also named Frances (pronounced identically but spelled differently), but was known as Fanny, which caused me and my siblings no end of amusement growing up, since her maiden name was Longbottom.

Prior to moving to this country, Grandfather Darling attended Mill Hill School in London, an all boy's public school (it has since gone co-ed).  He finished his secondary school education in America, where he attended the Mount Herman School for Boys (as it was then known), followed by Yale, and then the Union Theological Seminary.  As I have written in a previous post, Grandfather Darling was a man of the cloth and spent the better part of his career as a minister leading a large and robust congregation of the faithful in Grosse Pointe, Michigan.


At some point after moving to America, Francis A. L. Darling legally changed his name to Frank A. Darling, masculinizing his first name and dropping his second middle name.  When I asked him as a boy why he did this, he told me that it was because it sounded more American to him, and he wanted to fit in in his adopted country.  However, given what I have subsequently learned about his rather tumultuous adult relationship with his mother, who ultimately went certifiably mad, I believe his real motive was to sever such a direct connection to the woman whom he believed to have abandoned him as a boy, when he was sent off to live in this country with no prospect of ever returning to England.  He clearly had issues with this, and with her.  And I think I would have issues, too, if I had been sent off as a boy of fourteen by my mother to live with distant relatives in a foreign land, never to return.

Frank Darling was a great clothes horse for most of his life and also a great pack rat.  It was a family joke that it was virtually impossible to get him to part with something once he had acquired it, clothing in particular.  When he died in the mid 1970s he left behind an astonishing amount of clothes and related accessories that he had accumulated over fifty or more years.  If I remember correctly, and it has been some time now, I think there were more than sixty suits in his closets, over forty sport jackets, and seventy or so pairs of trousers.  Plus there was an equally jaw-dropping number of shirts, ties, shoes, hats, etc.  Included in this mass of clothing were such oddities as a pith helmet (to our knowledge he had never been to such a place that required the use of one), his running shoes from when he was on the Yale track team, and a blazer from the Mill Hill School.

While most of my grandfather's clothing was sent to a nearby college's theater department, my mother--who was given the task of sorting through and packing up his clothes--put aside several of the more interesting pieces for me and my brother, Frecky.  The frock coat and collapsable silk top hat that I got are long gone, but I have managed to hold on to my grandfather's Mill Hill blazer. 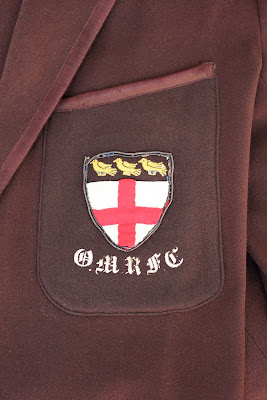 Made out of chocolate brown wool with stitched binding in the same color, the blazer has silver buttons and the school's crest on the breast pocket, along with the letters OMRFC.  The maker's label is so frayed that it is impossible to read who made it.  Inside the blazer's breast pocket I found this card, written in my grandmother's handwriting, that explained what OMRFC stood for: 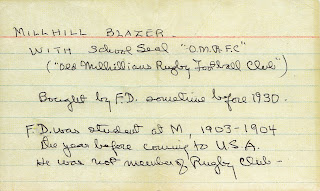 "Old Millhillians Rugby Football Club."  I have always found it amusing that my grandfather, who, according to my grandmother did not play rugby at Mill Hill, owned this blazer.  Clearly he had fond associations of the school, for he bought the blazer twenty or more years after he would have graduated from it, had he stayed in England.  But how is it that he came to own this particular one, with the OMRFC letters upon it?

When I inherited the blazer it did not fit me.  I was able to wear it for a time, though, after I had the body taken in and the sleeves lengthened.  However, with the thickening that middle age has brought upon me the blazer no longer fits me, and it mostly hangs in a closet.  That is, when Boy doesn't wear it, as the blazer fits his more youthful figure, and he goes about in it from time to time.  But it is a rather fragile garment, having been made over eighty years ago, and Boy only wears it infrequently, on special occasions. 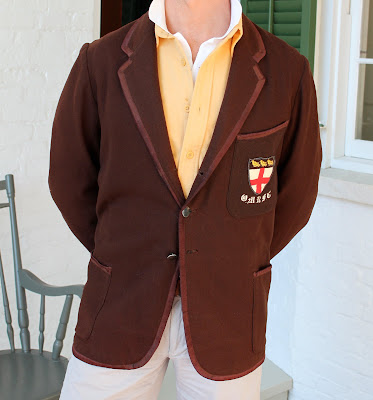 My grandfather's blazer is a treasured possession of mine, and something that I will never part with so long as I remain sentient.  I value it because it is a vivid connection with him, and one that is intensified by knowing that he not only owned it, but wore it, too.  The blazer was something that my grandfather valued sufficiently to seek out and buy on a return trip to England, and then kept (along with a lot of other clothes) for more than fifty years.  While I also own a number of other things that I inherited from him (bits of silver, cufflinks, and such), none of them resonate with me in quite the same way.

Tell me, do you have something that you inherited that you also treasure?
Posted by Reggie Darling at 9:21 AM