Boy and I bought Darlington House in the winter of 1998 as a country retreat from our Manhattan high-rise apartment. Both of us had lived in the City since graduating from college, and were ready to own a house. While we had taken shares in beach houses on Long Island over the years, we wanted to send out more permanent (and stable) roots, and so went house hunting. We wanted a comfortable place with architectural merit and roots in the early 19th century.  However, our budget was such that while plenty of options that fit this bill were available in weekend communities on Long Island and northwestern Connecticut, they were out of our price range at the time. So we needed to look farther afield at more affordable locations. After doing homework we found that it was still possible to acquire a house that fit our requirements in the Hudson River Valley at a price we could also afford. And so we became home-owners in the Village of Van Rensselaer, New York, just two hours by car north of the city. We named the house “Darlington” because, well, my last name is Darling and we thought it would be amusing to give our house such a name. 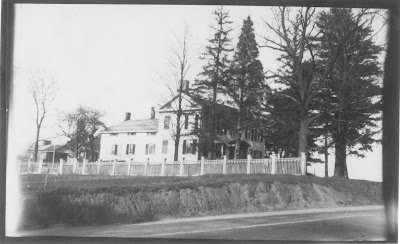 Darlington in the 1920s
Darlington is a center hall Federal house built in the 1810s that was added to in the 1830s and then more recently by us. It was built as a gentleman’s farm on 165 acres and has always been lived in by people who appreciated it and cared for it. It is what the academics call “Upper Middling”, which means that it was built for people of means and stature in the community, but who were not members of the landed aristocracy or “Gentry”. The builder of our house was of Dutch ancestry, like many in the area, and was a well-respected and well-connected Doctor. He and his wife raised a family of 6 children in the house. Over the years it took on a Greek Revival cornice and the land was whittled away to only two acres, but remarkably all of the Federal interiors and detailing remained entirely intact. Three outbuildings, comprised of two wooden Greek Revival barns and a brick Federal workhouse, also survived. The previous owners, the Proctors, acquired the property in 1931 and installed modern plumbing, heating, and electricity in the house and raised a family of 5 children in it.

People in the community still speak of Mrs. Proctor, who lived in the house into her late 90s, as a force to be reckoned with. She apparently considered herself to be the Queen of the Village, was rather outspoken, enjoyed her cocktails, was president of the Garden Club, wore a mink coat because she could, and sent her children off to boarding school because she and her husband preferred to spend the winter in Bermuda. Sounds like my kind of gal!  I wish I'd known her...

By the time we came along Mrs. Proctor had been shipped off to a nursing home, and the house had languished on the market for several years, unsold. We bought it from her children, all by then in their 70s and none of whom were interested in taking on the task of bringing the house up to modern requirements. While it had been well-cared for by the Proctors, little other than routine maintenance had taken place since the 1960s. Both Boy and I had grown up living in houses, but neither of us had actually owned one, and so were excited about the prospects for fixing up this house and breathing new life into it.

In retrospect I now fully appreciate why Sam Proctor, the son who negotiated the sale, burst out laughing at the closing when the last document was signed and the sale proceeds had been wired into his account. He was convinced he’d just sold a Money Pit to two suckers from New York City who had no idea what they had taken on.

And he was right.

Photo courtesy of Sam Proctor
Posted by Reggie Darling at 12:17 AM