Lunch at the Russian Tea Room

From time to time I plan on doing a posting on a restaurant where I have dined, or where I may dine regularly. Not exactly a foodie’s review, but rather Reggie’s observations regarding what made the experience worth reporting on for those who read this blog.

I first learned of New York’s fabled Russian Tea Room as a youth living in Connecticut, where WQXR was a staple of our household’s radio dial. The restaurant was a regular advertiser on the station at the time, and all of its ads featured the lilting Kentucky-accented voice of Faith Stewart-Gordon, its owner/proprietor. In the ads Ms. Stewart-Gordon urged her listeners to take a meal in the restaurant’s sumptuous White-Russian world of samovars, blinis, and caviar, with the tag line that its 57th Street location was “…just steps from Carnegie Hall.” 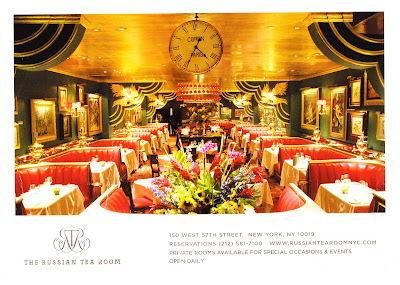 When I moved to New York after college Ms. Stewart-Gordon still owned the restaurant and it was still on 57th Street, a favorite of a well-heeled clientele and media heavy-weights. I stopped in for a drink one evening after work with a friend of mine to, as-they-say, “check out the joint” and was pleased to see the interior was just as fantastically old-world Imperial Russian as I had hoped it would be. I also clocked that Barbara Walters was sitting in the front banquette. However, I also concluded that this was a richer and older venue than such as I could appropriately afford, a view confirmed by the fish-eye appraisal of me and my companion by the bartender who somewhat reluctantly took our order. After finishing our astronomically-priced glasses of champagne we beat a hasty retreat.

The intervening years have not been particularly kind to the Russian Tea Room. There have been multiple owners, multiple closings, renovations, and ups and downs. Today the restaurant is primarily thought of by the city’s cognoscenti as more of an over-priced, over-the-top, food-mill tourist joint than the dining room for the city’s elite that it once was. That’s not surprising since its last renovation was under the ownership of Warner LeRoy of the now-defunct Tavern on the Green and Maxwell’s Plum empire. No longer owned by the LeRoys, today the Tea Room is controlled, I believe, by a private equity consortium rumored to be more interested in the astronomically-valuable real estate that it sits on than in the restaurant. 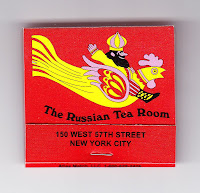 So it is with some surprise that I found myself there the other day for the first time since my previous visit, happily sitting in a cherry-red banquette in a still-glorious interior, delightedly tucking in to a delicious meal beautifully served by an attentive staff.

Here’s how it happened. Several weeks ago I decided to take my business manager, a wonderfully attractive and fun lady, out to lunch to thank her for her support this year. I wanted to take her somewhere that was a bit of a destination, someplace attractive and grown-up, someplace special. I trolled around the Internet looking for suitable candidates in midtown, where our offices are located, and came up with the Russian Tea Room as an option. With its famed décor of green, red, and gold, I thought it couldn’t possibly get any Christmas-ier than the Russian Tea Room, and the location was perfect.

On http://www.opentable.com/, one of my favorite restaurant review sites, I was surprised to read that every subscriber’s review for the restaurant was uniformly favorable, and in some cases glowingly-so. On top of that, the site was offering 1,000 points in their incentive award program if I reserved a table at the Russian Tea Room, when the typical award was only 100 points. So, I decided “why not?” and booked a table for the two of us at 12:30 on a weekday, the prime-time midtown restaurant lunchtime dining hour. 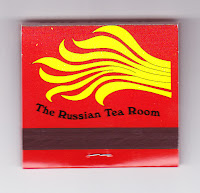 It was with some trepidation that my companion and I entered the doors of the restaurant, uncertain of what we would find. We were greeted immediately by a pleasant and welcoming maitre d', our coats were whisked away, and we were ushered to a well-situated banquette in the middle of the room with a terrific view of the entire restaurant. So far so good!

As we settled into our banquette we had the opportunity to take in our surroundings. The physical décor was all that one could hope for: a fiery playground of an over-the-top Russian fantasy with its famed red banquettes, green walls covered with gold-framed oil paintings, and a gold-leafed ceiling. Although I thought it could have benefited from some additional Christmas decorations, I wasn’t disappointed. However, the room was only about half full at what should have been peak occupancy, and the majority of the patrons -- mostly tourists in for a day of Holiday site-seeing -- were dressed badly. Not so good.

However, our dining experience was delightful! The wait staff at the Russian Tea Room is well-trained and efficient, and we were very well-attended to. Service was solicitous without being over-bearing, we were never ignored, nor were we rushed through our meal. And the food was delicious.

We ordered from the restaurant’s very reasonably-priced $35.00 Business Express Lunch three course prix fixe menu where the selection was more than sufficient. I started out with their signature red beet borscht, followed by truffle-marinated poussin, and finished with a melt-in-your-mouth cheese blintz dusted with cinnamon sugar accompanied by a double espresso. The food was delicious, served perfectly, and beautifully presented.

Some reviewers complain that portions at the Russian Tea Room are on the small size, particularly in relation to the menu’s pricing. I beg to differ. Given who else was dining there that day I suspect that such comments say more about where those reviewers are more accustomed to dining than it does about the Russian Tea Room. I for one do not like gargantuan portions at luncheon, particularly when spread over three courses. And at $35.00 a head, who are they kidding!

My business manager and I left the Russian Tea Room agreeing that it merited getting the word out among our acquaintances that it was, in fact, a lovely place to have a delightful meal, and that they should consider going there -- again if they haven’t been there in years, and for the first time if they’ve never been there before. In my view, it would be a shame to relegate this grand old girl to the sneaker-wearing, holiday sweater-sporting out-of-towners that largely populated the room when we were there.

And that’s why I'm writing about the Russian Tea Room.  It's well worth a visit.