For many years Boy and I have spent Thanksgiving day with dear friends of ours who live in a lovely late-18th-century house not far from us in the country.  It's almost the perfect place to spend Thanksgiving – classic New England compound, handsomely furnished, rooms warmed by roaring fires, and charming and amusing friends.  It doesn’t hurt that the inhabitants are wonderfully attractive too; one of the sons spent a stint in New York modeling for the likes of J Crew and Banana Republic.

This year we reluctantly tore ourselves away to spend the holiday in the City, as we had been invited to spend Thanksgiving with friends of ours there, and we thought a breath of change would be pleasant.  Boy became friends with what is now the wife of the couple whose Thanksgiving gathering we joined when they both attended Sotheby’s American Arts course a decade or so ago, and has maintained a fond friendship with her since then.  She is absolutely lovely – tall, slender, and every bit a lady in a modern, of-the-moment way – and she is married to a dashing fellow who looks like an up-to-date version of Clark Gable, only better.  While at their party the hostess excitedly told us that they had only recently been photographed for Italian Vogue for a story covering up and coming young couples in the contemporary art world. I can’t wait to see that!  The party was really quite swell – delicious, yummy food, plenty of hooch, people of all ages, gorgeous flowers, lots of laughter, and no-one sulking in the corner even though the guests were mostly drawn from the couple’s large and extended families. 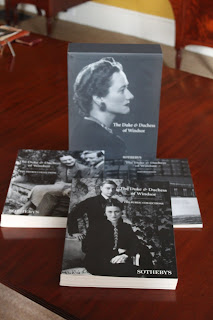 We woke the next morning, a day that has become rather hideously known as “Black Friday”, to find ourselves in our Manhattan high-rise apartment, and a lazy day ahead of us for the drive to Darlington House.  After spending an hour or so perusing the Sotheby’s catalogs of the Duke and Duchess of Windsor sale that I had recently ordered and were delivered that morning by our building’s valet, Boy, being the inveterate shopper and with a long list for his decorating clients, suggested that we drive up to Stamford, Connecticut, to shop the numerous, huge antiques and decorative arts malls the town is known for (among other things).  So we got into the family buggy, along with Pompey, and drove up to Stamford to see what we could find.

Our first stop was Harbor View Center for Antiques where, after what was appearing to be a fruitless journey, Boy pointed out a pair of German porcelain pugs, circa 1890, each holding a basket in their mouths containing two pug puppies.  Our beloved Pompey is a pug, and I have developed a weakness for pug figures (at the right price); since these fit both bills, “sold” they were. In the same case I also noticed a small, velvet-backed silver frame from the 1940s that had openings for three snap-shots, and would be perfect for upgrading a triptych of photos I have of me and two of my siblings that sits in a rather degraded leather case on my chest of drawers at Darlington.  So in the bag it went, too, joining the pugs. 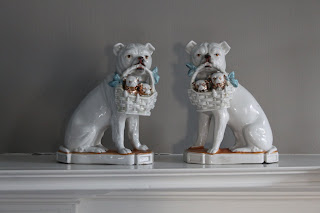 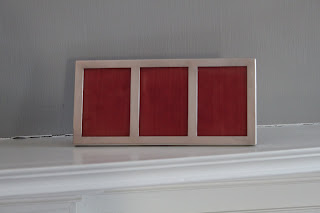 While at Harbor View I came across a diminutive pair of fruitwood Louis XV-style slipper chairs, probably from the 1940s/50s, done up in charming needlepoint covers that could easily have been supplied by Jansen for the Windsor’s country villa, the Moulin de la Tuilerie.  Not my style, per se, but they’d make someone like Louis Bofferding skip a heartbeat I would think.  So I passed. I also didn’t ask, though tempted, to see their collection of vintage shagreen and silver cigarette boxes, despite a weakness for them.  Not only do I not smoke (any longer) but I already have more silver cigarette boxes than I know what to do with.
After a number of other bootless stops at other antiques emporia in town our final destination was Hiden Galleries, a monster of an antiques mall chock-a-block with several hundred dealers.  We were quite enamored of an absolutely marvelous lamp of a Harlequin figure in full costume, mask and tricorn from the 1950s, in perfect condition.  Large scale and beautifully done, this was the “real deal” made for a highly sophisticated (and rich) client as opposed to the crappy “kitch” ones you see in junky group shops.  It would be perfection in the right space – perhaps a games room in Palm Beach or South Hampton – but not in either of our residences.  So we passed on it, speculating (again) that we wouldn’t be surprised to shortly see it in the window of Louis Bofferding, or Mallett for that matter. 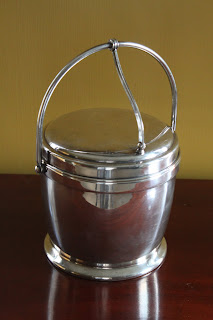 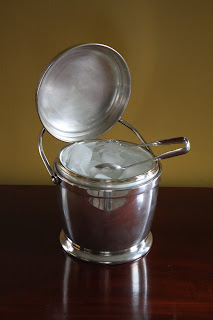 While we were at Hiden I found a vintage silver-plated, mercury-glass-lined, lidded ice bucket that will be perfect for our drinks table.  I’ve wanted one for some time now (ours sweats) and was delighted to find the exact model I’ve been looking for, fruitlessly on eBay. So with it safely ensconced at the front desk, Boy and I continued our shopping.  We took out and then returned a 19th century English glass and silver match strike (too expensive for its condition) but did pick up a couple of pieces of green majolica. 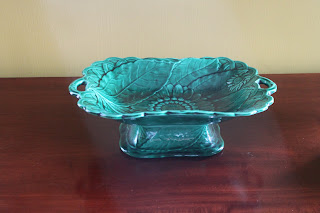 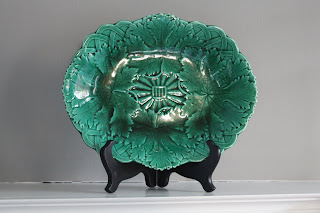 Back in the 1980s there was a fashion in certain circles for 19th century green majolica, made in England.  To meet demand, modern day copies became available at places like Horchow, Bloomingdales, Keesal & Matthews, and Scully & Scully.  At the time I bought and used a small set of plates, maybe 6, but after a few years got rid of them at a moving day tag sale because I had grown weary of seeing it everywhere.

However, time heals all wounds as they say, and more recently – within the last year or so – Boy and I had begun to remark on how we were beginning to like green majolica again.  About six months ago Boy bought a single 19th century green majolica plate that we’ve enjoyed having about (the green is really lovely – grassy and luminous).  More recently, we bought two, near-identical sets of 12 plates (for a total of 24) at auction for an astonishingly cheap price and were delighted to serve dessert on them several weeks ago at a brunch we held for several dozen. 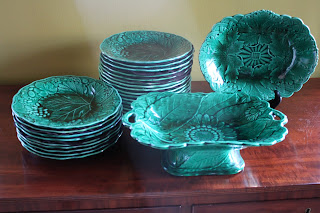 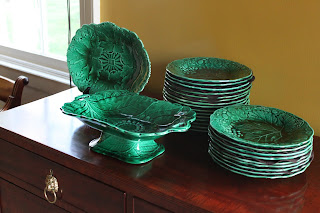 So when we came across the 19th century Wedgwood majolica footed compote and an incidental serving plate in one of the cases at Hiden Galleries, we were quite happy to add them to our stash.  And the price was right.   I'm showing our full collection here, which I think looks quite handsome assembled en masse.  The actual shade of their green is closer to the second photo than the first.

As we drove through Connecticut and then New York on our way to Darlington, our day of shopping completed, we passed any number of Big Box shopping malls with parking lots jammed with cars indicating that “Black Friday” was a success (at least in terms of foot traffic) for retailers of new merchandise.  I’m happy for them.  However, I much prefer to spend my “Black Friday” strolling in peace through the aisles of antiques stores.  Not only am I not annoyed by the hustle and bustle of today’s retail experience, but I am confident that what I come across will not be found in every shopping mall or under every Christmas tree in America.  I also know that the sticker price is almost always negotiable (no “manufacturer’s suggested retail price”), and that I’m doing my part for the environment by buying previously owned, recycled products.  Sure, I know I use carbon footprint by driving around, but – hey – I’m carpooling with Boy and Pompey when I do it.