We get a fair amount of snow at Darlington during most winters. Although only two hours north of Manhattan by car, the climate in our village in the Hudson River Valley is appreciably-colder than in the City. As the winter season takes hold more often than not we’ll find ourselves blanketed with snow when it’s raining in the more-temperate City. 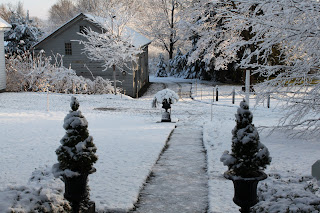 To prepare for the snowy season a lot of planning and industry is required. While our property is not particularly large, sitting on only two acres in a village setting, there is much to do to get it ready for winter. Once the weather turns cool the screened porch is emptied of its furniture, which is stored in our basement, and its sun-blinds are taken down and put away in the barn.  The most critical task is to have the property raked of the leaves that fall from our many trees, mulch the beds, and amend the lawns, which takes weeks of work to complete. While that's going on we empty and store the large clay pots in which we grow herbs and decorative plants during the summer, and clean and store away the gas grill. We also empty and then re-plant the cast iron urns with evergreens for “winter interest”, and store the wooden garden furniture in the barns. Water in the outbuildings and spigots is turned off and the pipes are drained. Gutters are cleared of debris. Reflectors are placed along the perimeters of the drives, and vulnerable shrubs along the village road are protected from salt and spray with burlap-wrapped snow-fencing. Firewood is procured and stacked away from the weather, the wood storage box is brought up to the house from the barn and stocked, and the wood baskets within the house are brought out of storage and filled, ready for the first fires to be lit in any of our six working fireplaces. 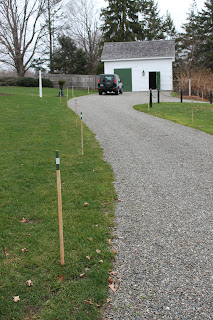 I am the one in primary charge of engaging and over-seeing the necessary support to make this happen at Darlington. Managing the logistics and timing is not without challenges, particularly since we live in the City during the week. Given the relatively short window that exists between when the last leaves have fallen and the snow begins, this can be somewhat nerve-wracking. But it is highly satisfying when I succeed in buttoning up our property before the first snowflakes flutter down, usually to remain in place until the spring thaw.
A lot of manpower is required to prepare the property for the winter. Boy is responsible for emptying and planting the urns (more on that in another post). Other than that we depend on others to do the lion's share of the work.  The bulk of the leaf clean-up is done by the locally-based county lawn service company that takes care of our lawns during the summer. They come four or five times during leaf fall to rake and remove leaves from our property. We are happy for them to take the leaves away since we know they will compost them as opposed to sending them to land-fill. It is an impressive sight to behold when their trucks arrive and dis-engorge half a dozen workers armed with rakes and blowers, and to see them in action. They also put up the snow-fencing and burlap along the village road. 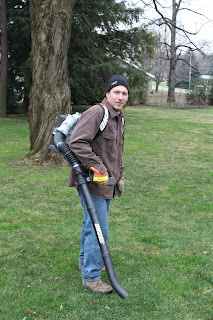 But there's more. Once the service has completed the bulk clean-up of the leaves, we then have our handyman, named “Rich”, come through the property and do a more-detailed leaf removal, plus most of the other projects on our checklist. He is usually accompanied by his teenage son, until recently known as “Junior” but more recently as “Richard”, and often another worker when the job demands it. Rich works for us on most weekends, usually Saturdays, and is someone whom we rely on for much of the work done maintaining our property. We first engaged him shortly after buying Darlington to plow our drives, which he still does, and over time he has taken on more and more responsibilities for us. He’s a great guy, we like him a lot, and he is someone that we feel blessed to have in our lives.

Rich and his son will spend at least two-to-three Saturdays doing detailed leaf removal after the lawn service has done their bulk removal, and when he’s done the property looks almost as manicured as a golf club, or as our friend Warner says: “coiffed”. They also mulch the beds, store the garden furniture, clean out the gutters, place the reflectors along the drives, and take care of the firewood. We have our plumber shut off the water to the outbuildings and blow out the pipes so they won’t burst. He’s best-equipped to do this, since he was the one who installed the exterior plumbing in the first place. 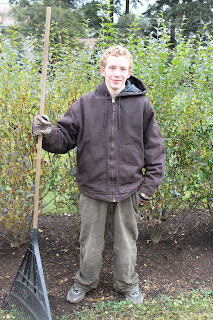 This year we were able to get all of the preparations completed ahead of the first snowfall. But we really timed it down to the wire: Rich and his crew of Richard and their friend Tony finished raking up the last bit of leafage just as the first snow flakes started to come down last weekend. Since then we’ve had another snowfall, and it looks as if the ground may well be covered with snow until the spring.
Maintaining a property like Darlington well requires attention, labor, good-timing, organization, and resources, too.  I enjoy making it happen and appreciate that it wouldn't be possible without the support of those who do the hard work and take pride in a job well-done.  I consider our stewardship of Darlington to be much more than a responsibility: it's a privilege.
Posted by Reggie Darling at 1:42 PM