Darlington House was built in the early 19th century before the advent of electric lighting, HVAC systems, indoor plumbing, screens or storm windows, and assorted other modern conveniences that today most of us take for granted.  The house had no such conveniences for more than a century until they were first installed in 1931, when the Proctors bought it.  One of the pleasures we have had as owners (stewards, really) of the house has been learning how its occupants lived before there were such conveniences.  We have studied how they kept warm during the winter and cool in the summer, lighted their rooms, bathed, laundered, and made it all work.  It has been fascinating to understand how people of the early 19th century coped with their domestic challenges and to comprehend the genius with which they did so, considering the obstacles they faced. 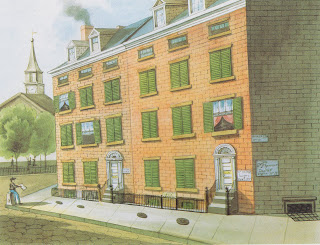 One of the best sources I know for learning about how people in pre-industrial America faced domestic life is the absorbing, well-written, and profusely illustrated book At Home: The American Family 1750-1870 by Elizabeth Donaghy Garrett.  I have spent many hours pouring over its 304 information-packed pages, and I encourage anyone who is interested in American domestic material culture to add it to their library.  Reading At Home helps put in perspective how fortunate we are to live in today's world of today's conveniences, no longer hostage to the time- and effort-consuming tasks of our forebears. 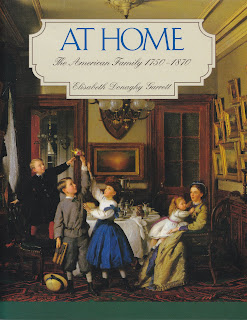 One of the things that repeatedly strikes me about how pre-industrial Americans coped with their day-to-day lives is that many of their solutions fit squarely within today's definition of living "green."  They, of course, had miniscule carbon footprints compared with ours today, despite the fact that they burned wood, and later coal, as their primary fuel.  They disposed of nothing unless it was irreparably broken or worn out, re-using and re-purposing as much as possible.  They were thrifty, which was considered a virtue.  But what really impresses me is the cleverness with which they maximized the efficiency of the solutions to their domestic challenges. 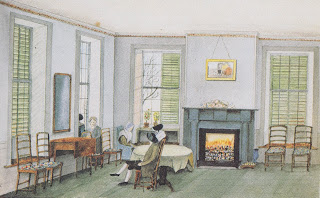 It was not until I came to inhabit Darlington that I fully appreciated the ingenuity and versatility of venetian blinds and exterior shutters.  I had lived with venetian blinds over the years, and liked them, but it was only after we installed them in our dining room at Darlington that I came to comprehend what a technological marvel they must have been when introduced (and that they remain today).  I always appreciated that exterior shutters added to the visual attractiveness of many houses, but I did not at all understand that they are, in fact, a superb solution to the problems of light control, security, and ventilation when used for their original purpose (and when they are operable, as opposed to screw-on). 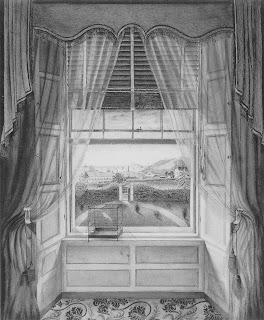 While the windows in Darlington's dining room did not have blinds when we bought the house, it was clear that the window surrounds in the room were built to accommodate venetian blinds, a view confirmed by the architectural historian whom we have worked with since we began restoring the house.  We reinstated blinds in the dining room's windows, and ordered historically accurate, period-appropriate wooden ones from Devenco http://www.devenco.net/, a firm that specializes in custom-made blinds (plus interior and exterior shutters) for historic buildings.  They work perfectly, are handsome, and are pleasing to use. 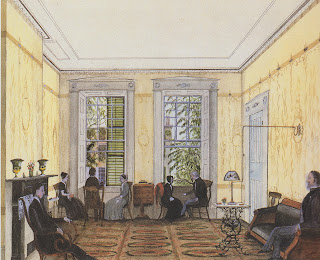 Darlington was built with exterior, operable slatted shutters at its windows (known in the era as "Venetian" shutters), which were remarkably still hanging when we bought the house, almost 180 years after it was built.  However, the shutters were decaying and degraded, and we had to replace them.  We had them reproduced, line for line, and had them re-hung with the original wrought-iron hardware that I removed from the original shutters and reconditioned (a job that took me the better part of one winter's weekends to complete).  The "new-old" shutters operate smoothly, and we use them as they were originally intended: to regulate light and for security.  We love the way they look, and we appreciate them for being such efficient and elegant pieces of machinery.  They are painted, as are the interior blinds in the dining room, in a handsome grass-green color taken from period paintings of buildings built in America in the early part of the 19th-century.  Boy developed the color and had it custom-mixed in Benjamin Moore paint.

Here's what Ms. Garrett writes in At Home about shutters:

"First advertised in American newspapers in the mid-1700s, slatted shutters had become universal by the mid-1800s, for they protected household furnishings from the effect of sunlight; they discouraged the free entry of flies and mosquitoes; they screened out the dust and sand that blew about the streets; they enhanced privacy; and they promoted summer comfort."

We use our shutters at Darlington House.  During the summer we often close them for days at a time, both to reduce our energy consumption and also because the light that comes through the slats is wonderfully pleasant; I'm convinced that the rooms even appear cooler.  During storms we often close all of the shutters on the house to protect the windows from blowing debris, and we also close them when we are away for weeks at a time.  I love the way the house looks with all of its shutters closed, the place all battened down.  It is curious how many comments we get from neighbors (and strangers, for that matter), as many of them have never seen a house whose shutters are used as they were intended.

Moving inside the house, into the dining room, here is a photo montage of a number of the arrangements available when windows are dressed with venetian blinds and exterior shutters:

Venetian blinds are a highly efficient means of controlling light and privacy in one's rooms.  Just as we use our shutters, we also use our blinds to regulate light in our dining room, and also for effect.  Unlike roller blinds, they allow one to see out the window when drawn, so it is possible to have full privacy but still have a sense of the outdoors.  There are many options for how one configures the blinds, depending on how much privacy or light is desired.  And on top of that, they are exceedingly handsome, neat, and plain.


Watercolors and drawings from At Home: The American Family 1750-1870, by Elizabeth Donaghy Garrett, Henry N. Abrams publisher 1990;
All photographs by Boy Fenwick
Posted by Reggie Darling at 9:05 PM