There are a number of books that appear with some frequency on the lifestyle blogs that I follow.  I Married Adventure was a sensation last year for its zebra-print cover; the inadvertently hilarious camp classic My Way of Life by Joan Crawford is quoted regularly; The House In My Head by Dorothy Rogers is often referred to; and Decorating Is Fun! by Dorothy Draper makes an appearance from time to time. 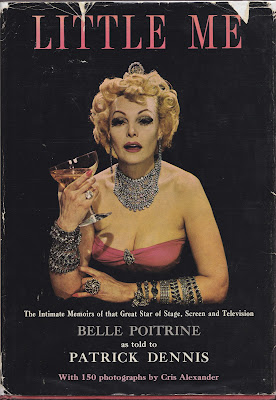 But there is one book I haven't seen on the blogs that I think merits consideration, and which I am recommending to my readers as deserving a place in the pantheon of amusing and clever books of interest to those in the lifestyle blogosphere.  It is Little Me: The Intimate Memoirs of that Great Star of Stage, Screen and Television Belle Poitrine, as told to Patrick Dennis.

As many readers of this blog well know, Patrick Dennis is best known as the author of Auntie Mame, the hilarious book turned into Broadway play, Hollywood motion picture, Broadway musical, and Hollywood musical.  Little Me may not be as well known, but is well worth adding to your library.  It is readily available through http://www.alibris.com/ and other used-book websites.

Here's what the book jacket says:

"Now it can be told!  Here, at last, is the penetrating, soul-baring story which audiences the world over have waited for -- the revealing memoirs of that great star of stage, screen and television, lovely Belle Poitrine, as indiscretely confided to Patrick Dennis.
"Pulling no punches, sparing no trivial detail, this gracious lady tells the dramatic story of her own turbulent life from its humble beginnings in sleepy little Venezuela, Illinois, to absolute stardom and sole ownership of mighty Metronome -- Hollywood's greatest studio. 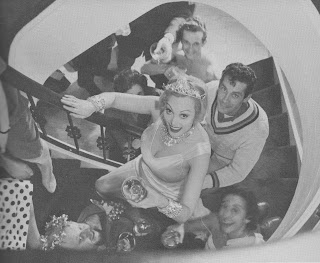 Queen of the Metronome studio
"Then down, down, down to the very sewer main of depravity and finally, onward and upward to health, wealth, and peace of soul through her own beautiful philosophy of life.  (Skeptics please note Chapter XX, 'I Find God In Southhampton.')
"In 21 thrilling chapters Miss Poitrine modestly relates her rise in the wonderful world of show business from ten-cent burlesque (America's commedia dell' arte) to the very pinnacle of stardom. 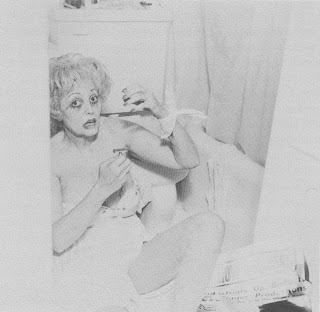 Down and out
"What reader does not tingle at the mere memory of such unforgettable celluloid epics as The Broadway Barcarole of 1930, Papaya's Paradise, Tarzan's Other Wife, Jesus Wept and Caw Girl?  Our beautiful Belle was in them all.
"Who cannot remember such fabulous stars as Letch Feeley, Helen Highwater, Dudley du Pont, Magdalena Montezuma, Carstairs Bagley, Lyons Maine and Mae Retch?  All of these great names -- and a host of others -- people the Poitrine pages. 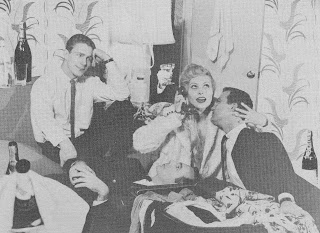 Entertaining "Yalies" at the Taft Hotel
"Here, too, are the men in Belle's life -- heroic, ill-starred Fred Poitrine; Cedric, Tenth Earl of Baughdie, who could give a woman anything but love; dashing Letch Feeley, the handsome star who had too much too soon; sinister George Musgrove; distinguished A. K. Frobisher; Morris Buchsbaum, the "starmaker," and an army of dashing beaux.
"The glamorous settings -- historic Baughdie House, the Court of St. James's, Casa Torquemada in fabled Beverly Hills, New York, Southhampton, Paris, London, Rome, Venice -- all come vividly to life in this truly astonishing book. 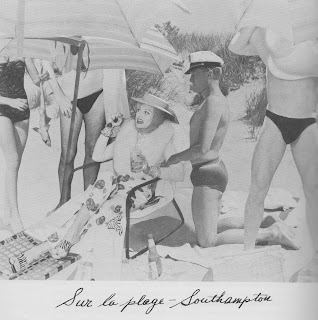 Secure at last
"And, of course, it's all the sheerest nonsense ever put to paper -- a deadpan parody of the typical star's typical autobiography written with one part idiocy, one part euphemism, one part malarkey and ten parts sheer ego plus 150 (count 'em) photographs by Cris Alexander.
"And it may even mark a milestone in publishing history as the book that discouraged all other actresses from writing their memoirs.  At any rate, we hope so."


I highly recommend this immensely entertaining, laugh-out-loud parody, which is a delight from beginning to end.  In addition to being amusingly written, it is chock-full of hilarious photographs of Miss Poitrine in all her glory that add to the pleasure of reading this very funny pseudo-autobiography. 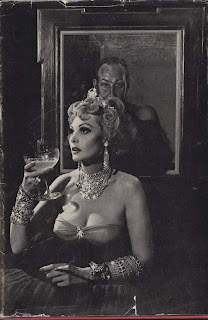 All images taken from Little Me, The Intimate Memoirs of that Great Star of Stage, Screen and Television Belle Poitrine, as told to Patrick Dennis.  Published by E. B. Dutton and Company, Inc., in 1961.
Posted by Reggie Darling at 1:31 PM