I believe that employed domestics, whether maids or manservants, should wear uniforms. What exactly constitutes the uniform can be decided between employer and employee, but I think it is entirely reasonable when employing someone in your house that you require them to wear clothing that conforms to what you believe is appropriate for the position and environment.  In my house, that means a uniform. 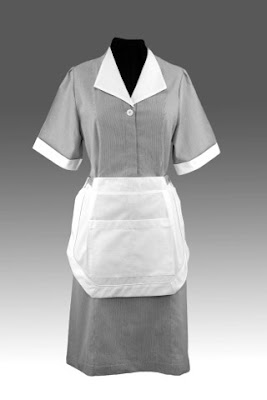 photo courtesy of http://www.tipsuniforms.com/
In today’s society, where all manner of structures have broken down, many people who employ domestics either don’t know that they can require them to wear a uniform or think asking them to do so is hopelessly old-fashioned and stuffy, or even humiliating to the domestic forced to wear such a symbol of oppressive servitude.  Not I.

Employment as a domestic is, I believe, an honorable profession.  Many people in professions in this country are proud to wear the uniforms of their field, such as police, military, medicine, etc.  In my field, investment banking, I too wear a uniform, mostly suit and tie, and I’m expected to conform to my employer’s requirements to do so as a condition of employment.  To that end I believe it is reasonable that I, as well, require our housekeeper to wear a uniform.

I grew up in a household where the domestics (maids, actually) were required to wear uniforms, and it seemed perfectly natural that they did so.  When it came time in my life that I was on my own and could afford to employ a domestic to clean my apartment, uniforms weren’t part of the deal since the housekeepers that rotated through my place only came once every other week or so.  In other words, they were independent contractors in a position to set their own conditions of service employment.

Over time, though, I was able to employ someone on a more regular basis, at least a couple of days a week, and at times would find myself at home during the day with housekeepers whose sartorial choices were at best dubious and at times appalling.

We once employed a woman at Darlington House named Luanne who was a crackerjack housekeeper but who came to work dressed like someone you’d expect to see in the bleachers at a NASCAR race.  Not that I’ve ever been to a NASCAR race, but I have a pretty good idea of the type I’m thinking about from what little I’ve seen of them on television or the covers of magazines in convenience stores.  In any event, Luanne would show up at our house wearing Timberland boots; skin-tight, cut-off jean hot-pants; and a "wife-beater" or a tube top sufficiently cropped to reveal the Harley-Davidson "tramp stamp" tattoo on her lower back.  I’m not exaggerating.  Plus she had a mean bleach-job and spent way too much time at the tanning salon.  The thing is, she was a really marvelous housekeeper and had what appeared to be limitless energy.  So we put up with her rig, at least for a while.

Logo courtesy of Harley-Davidson
Ultimately, though, it became too much for me to bear, and while I couldn’t do anything about the bleached hair or the fake tan, I was determined to do something about the clothes.  Luanne was perennially short of cash and routinely requested that we provide her with advances on her pay, or loans so she could make ends meet.  To reward her for her good work over the years we decided to give her a lump sum of money (to cover her pressing bills) and also to provide her with more employment, including weekends, when we would be at home.  As a pre-condition, though, I took her to a local clothing store and bought her khakis and a polo shirt for her to wear for daily chores when we were there and a black skirt and white button-down shirt to wear when we'd have guests.  Unfortunately, we didn’t get to see much of Luanne in her new uniforms because shortly thereafter we had to fire her and change the locks, as we learned that she had become a meth addict.  In retrospect it certainly explained her limitless energy and ever-present need for more cash.

So when we hired our current housekeeper, Karyn, a condition of her employment was that she had to wear a uniform when working at Darlington House.  She arrives at Darlington wearing what she chooses and then changes into the clothes that we provide.  This includes two uniforms: one of basic khakis and a polo shirt plus bib apron for daily wear during the week, whether or not we're there, and the other a classic maid’s uniform of grey dress with white cuffs and apron for use when we are there on weekends.  At first she was a bit “iffy” about wearing the maid's dress and apron, but she says she has come around and actually enjoys wearing it. 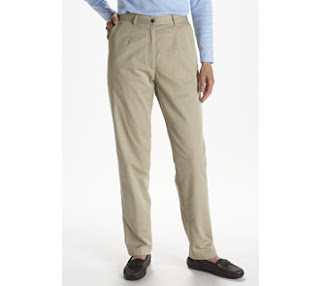 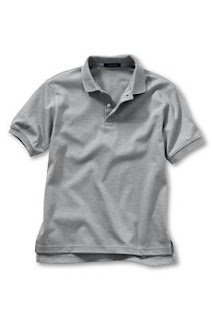 photo courtsey of http://www.apron.com/
I like having Karyn wear a uniform when she’s working at Darlington.  Having her do so means that I won’t find myself unpleasantly confronted by what I might consider to be her unfortunate or inappropriate clothing choices if I happen to be at home when she is there.  It also means that she isn't wearing out or soiling her own clothes when working for us at Darlington.  And it clearly identifies her as an employee rather than the “lady of the house” when deliverymen or strangers or guests come to our door.  In the end, I know what to expect when I see or spend time in the house with Karyn, and so does she.
Do your maids wear uniforms?
Posted by Reggie Darling at 7:46 PM