Boy and I decided to spend this past weekend in the city, enjoying a respite from Darlington House.  January can be grim in the Hudson River Valley, frozen and lifeless, whereas Manhattan is brimming with activity and is rather fun to spend time in, particularly now that the holiday-season tourists have gone.  We spent Saturday going to a museum (The New York Historical Society), shopping (Tribeca antiques shops and Bergdorf Goodman Men), having lunch out (L'Absinthe), and spending the evening happily tucked away in our apartment catching up on recorded television shows and eating Chinese takeout.

We woke Sunday morning with the day yawning ahead of us and decided that a road trip to Stamford was in order to check out the town's numerous antiques centers, both for Boy's clients and ourselves.  So we fired up the jalopy and headed over to Connecticut where we spent the day trolling though the shops. 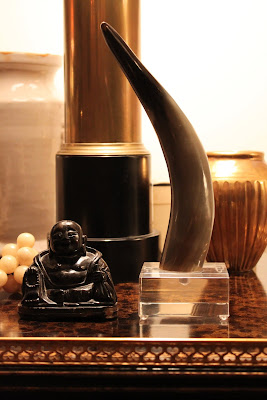 Our first stop in Stamford was the Antique and Artisan Center where I was surprised to see that the pair of diminutive Louis XV-style chairs with needlepoint covers that I had admired when we were last there (see "Our Black Friday" post, dated December 10th) were still available.  Louis Bofferding, where are you?  After a thorough search through all of the booths we came away with only one thing for ourselves, a small horn mounted on an acrylic base that is now sitting on a side table in our city living room, shown in the picture above.

While we were at the Antique and Artisan Center we became obsessed with diminutive chairs, after coming across the little Louis XV ones, and spent the rest of the day snapping pictures of examples that we found in the various antiques centers.  The thing is, we weren't shopping for little chairs at all, it's just that once we focused on them we then became fixated on them, and therefore were on the lookout for them for the rest of the day.  That frequently happens when we are out and about in antiques stores or group shops: we will latch on to something that strikes our eye and then start pseudo-shopping for it, or its category. That's what we were doing with little chairs on Sunday afternoon.  We had no interest in buying small chairs on our trip, we were only pseudo-shopping for them.

One of my favorite pseudo-shopping categories is clown paintings, which I frequently come across in group shops.  I have no intention of ever owning a clown painting, and consider them to be rather creepy in a John Wayne Gacy sort of way, but I am always on a semi-lookout for them whenever I'm trolling through an antiques mall or group shop.  I almost always find one or two examples to add to my pseudo collection.

Anyway, getting back to Stamford, here's a photo spread of all of the little chairs we came across while pseudo-shopping for them during the afternoon: 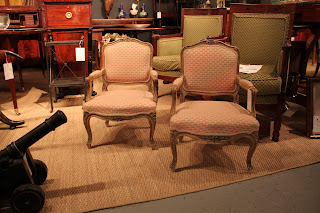 Two diminutive Directoire chairs; I particularly like the slipper chair 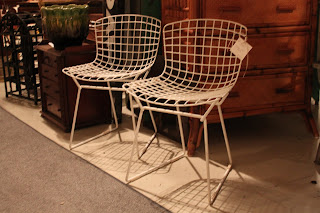 Two Bertoia children's-sized chairs
We didn't just have our eyes open for diminutive chairs, however, as we made our rounds in Stamford.  I came across a pair of Regency-style tables that I admired, well, actually lusted after. I would have been more than happy to make room them for in our city apartment if we had space for them.  With some gilding applied to their brass these tables could well find themselves somewhere like Mallett, or Clarence House for that matter (not the fabric showroom, the Prince of Wales' London residence). 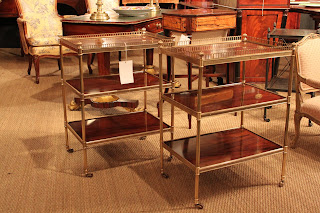 Our final stop was Hiden Galleries, where I was surprised to see the Harlequin lamp that I wrote about back in December was still unsold.  I suppose that it takes a special person to see the charms of this lamp, or at least have the type of house or decor that could accommodate such a lamp.  Isn't there anyone in Palm Beach who would like to bring this home? 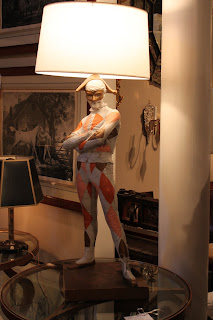 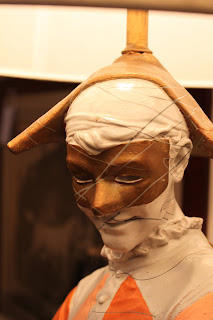 It was at Hiden that Boy and I found the other two objects that we actually bought during our trip.  And both of them are very humble indeed.  Following his success at last weekend's Pier Show, Boy found another vintage earthenware dog bowl for Pompey.  And I found a small painted metal fire bucket, probably from the 1940s-50s that I think will be perfect hanging in our small barn at Darlington. 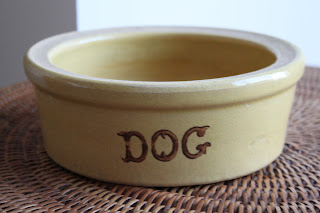 Boy did find a number of big-ticket possibilities for clients during our visit to Stamford, so it really was a useful excursion for us.  But we came home with only three small-ticket items for ourselves, which is just fine with me.

Here's a question: do you also pseudo-shop when you are in antiques stores?
All photos by Boy Fenwick
Posted by Reggie Darling at 9:26 AM