New York has always had a love affair with French food and French restaurants, and that’s understandable since France produces some of the most wonderful cooking known to mankind. While the city’s top restaurants are no longer exclusively French, that country’s cooking continues to hold a solid place in New York’s restaurant scene, from the ranks of the most quotidian to those of the most rarified. Food and restaurant fads may come and go, but New York will always lay a welcome mat for the cuisine de France.  Boy and I eat French food so often that we've come up with this little joke: Q: "Do you like ethnic food?" A: "Of couse I do. I adore French cooking!" 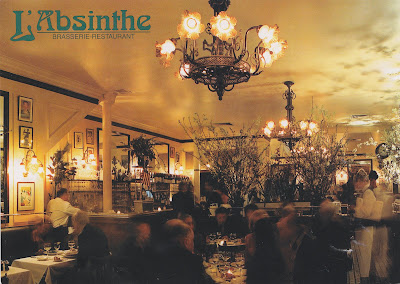 L'Absinthe's postcard
At the upper end of the “better” French restaurants in Manhattan sits L’Absinthe, ranking well above the neighborhood bistros that litter the city, and below the vaunted chambers of the likes of Le Bernadin or La Grenouille. L’Absinthe is an haute Bourgeoisie establishment whose well-heeled clientele is largely drawn from the surrounding Upper East Side neighborhoods. Very 16th arrondissement. Not surprisingly L’Absinthe tends to be somewhat dressy for dinner during colder months, when many of the men dining there arrive wearing sport jackets (and older men often wear ties) and ladies arrive dressed, wearing jewelry. This gets notched up a few degrees when the international antiques and art shows are held at the nearby Park Avenue Armory, whose well-dressed out-of-town patrons and dealers also flock to L'Absinthe's elegant and comfortable rooms. 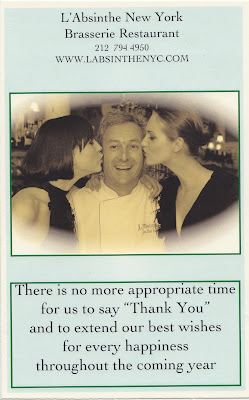 Jean-Michel Bergougnoux is a well-known flirt
L’Absinthe is one of my favorite restaurants in New York, and Boy and I have been regulars there since it opened over a decade ago. We are on a first name basis with its chef/owner, Jean-Michel Bergougnoux, formerly of Le Regence and Lutece, among other storied restaurants, as well as most of the staff. We always sit at the same banquette whenever we dine there, which is at least once every several weeks and sometimes more frequently. I have eaten at L’Absinthe so often over the years that I almost don’t need to look at the menu, whatever the season. And they know exactly how I like my martini: Beefeater gin, up, with olives, very cold, and very dry.
On arriving at L’Absinthe the first thing that strikes one is how authentically Parisian the restaurant appears. Decorated in high Belle Époque style, its walls are covered with large mirrors and framed cartes and posters, and the room is beautifully lighted by gorgeous, flowery Art Nouveau chandeliers and wall sconces. There are many banquettes to choose from, and it is strictly a white tablecloth establishment. Waiters are suitably dressed in traditional black and white with long white aprons tied around their waists. L’Absinthe looks sufficiently authentic that the producers of The Devil Wears Prada used it as a location for two of the film’s scenes that take place in Paris.

Like many of the brasseries I’ve eaten at in Paris, though, L’Absinthe is not entirely immune to decorating faux pas every now and then, such as a picture here and there in somewhat dubious taste or a less-than perfect arrangement of flowers. However, that doesn’t bother me a whit since I think it actually makes it seem more authentically French than some of the too-perfect imitations I’ve dined at elsewhere in Manhattan.

But where L’Absinthe truly excels is in the kitchen, which under the careful oversight of Monsieur Bergougnoux produces a bounty of delicious, perfectly cooked and beautifully presented Parisian favorites, eliciting “oohs” and “ahs” of pleasure from delighted diners.

Upon being seated for dinner every table is delivered a plate of hot gougeres to tease the palate while the lucky patrons drink aperitifs and study the menu. L’Absinthe excels in serving shellfish, and Boy and I almost always start out with a plate of briny, perfectly shucked oysters flown in from the East and West coasts. I have to force myself not to always order the restaurant’s excellent Niman Ranch steak frites or justifiably renowned roasted free-range chicken, since the menu has so many other delicious options to choose from, including a divine poached chicken in black truffle broth that is perfect for when one is counting calories. But who’s counting calories at L’Absinthe? Particularly when it is thought to serve one of the best apple tarts in town, and where the profiteroles are some of the most heavenly. Don’t forget to ask for a small dish of their velvety after-dinner chocolate bonbons to finish off your meal.

L'Absinthe's prix fixe luncheon menu
In addition to being a wonderful place to eat dinner, L’Absinthe is also a delightful place to have a weekday’s lunch, and on weekends they throw a sumptuous brunch, crowned with the ceremonial wheeling around of a cart loaded with such classic French desserts as Baba au Rhum and Ile Flottante.
L’Absinthe is a marvelous place to go when meeting up with or entertaining friends. My enchanting eldest sister, Camilla (known as “Sister”), was in town last weekend during Antiques Week visiting her dear friend Davinia, and Boy and I took the two of them to dinner at L’Absinthe to celebrate. The place was jam packed with patrons, and Jose (the maitre d') told us they had to turn away over 100 reservations that night, typical for when the big antiques shows are in town. We felt lucky indeed to slide into our customary banquette and quickly ordered a round of Manhattans (the ladies) and martinis (the men).  We started out sharing two dozen oysters, and my three companions tucked into the restaurant's marvelous pot au feu while I devoured the excellent beef and lamb burger (L'Absinthe serves one of the tastiest burgers in town) with frites. We topped off our meal with souffles for dessert.  Divine.  It was a delight to see Sister and be able to introduce her and Davinia to one of our favorite restaurants in New York, and we all had a lovely time.

And yes, they do serve Absinthe, the allegedly wicked spirit for which the restaurant is named. I’ve tried it several times there with little effect, but I understand that one must drink rather a lot of it to feel much of anything. All the more reason to go back . . .
L’Absinthe
227 East 67th Street
New York, New York 10065
(212) 794-4950
http://www.labsinthe.com/
Posted by Reggie Darling at 10:09 AM