My posting yesterday of "Boy Scores A Picture" prompted the suggestion from fellow blogger the Columnist that it reminded him of Robert Burns, the beloved Scottish Bard (1759-1797).   After doing some research, I believe the Columnist is absolutely correct, and that we are, in fact, the surprised and pleased owners of a portrait in little of the famed proto-Romantic poet.

Here's how it unfolded: I read the Columnist's comment to Boy, who ran upstairs and retrieved a small glass paperweight that he bought more than 20 years ago, showing the Robert Burns Monument in Edinburgh.  As he was doing that I did a search on the Internet of various sites. 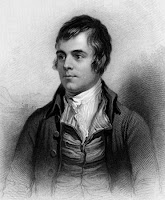 Our portrait and a period engraving; note same hair in all three likenesses 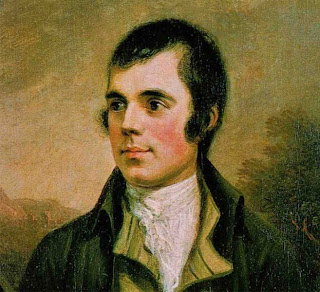 Detail of 1787 Nasmyth portrait; Scottish National Portrait Gallery
The face in our small likeness was done after the famous portrait of Robert Burns painted by Alexander Nasmyth (Naysmith) in 1787 from life when the poet was 28 years old.  The painting hangs today in the Scottish National Portrait Gallery and has been the subject of countless copies and engravings.  It is more likely that our portrait was based on an engraving of the Nasmyth painting.  The crossed-arms pose in our picture is possibly based on another portrait of Burns, also by Nasmyth, that was painted in 1828, a full 32 years after the poet's death. 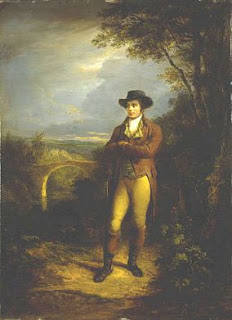 1828 Nasmyth portrait; Scottish National Portrait Gallery
In the background of our painting stands the Robert Burns Monument on the Calton Hill in Edinburgh, designed by Thomas Hamilton, and built in 1831-32.  The erection of the monument was highly publicized, and its dedication was widely reported in the media at the time.  It was, and remains to this day, a popular tourist destination. 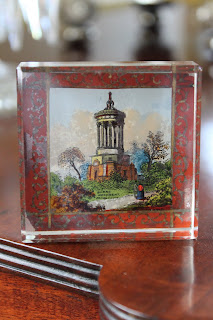 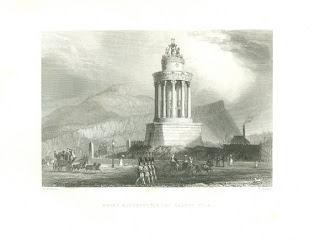 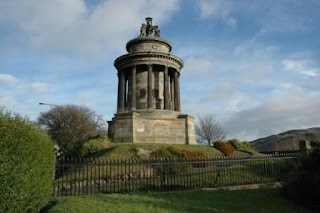 The monument today; photo courtesy South Ayrshire News
Given when the monument was built, and that the supplier of the board on which our picture was painted moved to its premises at 51 Rathbone Lane in London in 1832, Boy and I are convinced that our little painting was without doubt done in the 1830s, most likely dashed off as a souvenir for a visitor to the Burns Monument or to Edinburgh. 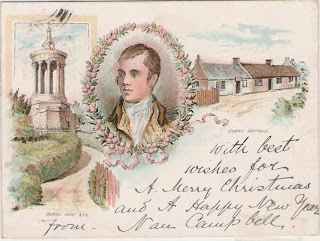 I cannot thank the Columnist enough for pointing me in the right direction, and I am indebted to him for helping me discover that our little painting is most definitely a likeness of Robert Burns.  His most enlightening blog, the Corinthian Column, can be found at http://corcol.blogspot.com/.

Posted by Reggie Darling at 4:02 PM