As the readers of this blog well know, Boy and I had the pleasure of throwing a large and festive holiday cocktail party last month. It was a marvelous gathering, well-attended, sparkling, and fun. We really enjoyed it, and our many guests did, too.

In the meantime I have been doing some thinking about what made the party successful, and what its drawbacks were. I’ve already enumerated the successes in previous posts, and so have nothing to add to them here. But I have come up with some observations that I believe my readers may be interested in as to what I believe guests can do to maximize the pleasure their hosts take in having them attend such a party. It is, after all, a two way street. 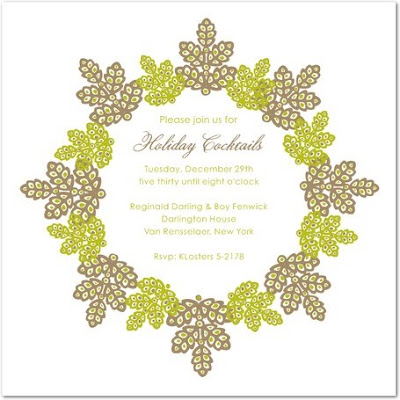 Invitation courtesy of http://www.tinyprints.com/
Following these simple rules will insure that you, Gentle Reader, are a popular and sought-after guest, and the beneficiary of numerous repeat invitations for years to come.
1. When you receive an invitation to a party that requests a response, you should do so well-in-advance of the event. Do not make your hosts chase you down.

Boy and I sent out 60 printed invitations for our cocktail party with Rsvp and our telephone number clearly printed at the base of the card (see above). We mailed the invitations at the beginning of December to provide our guests with plenty of advance notice, recognizing that many of them would have busy calendars during the holidays. Approximately half of the invitees—and kudos to them—responded within two weeks. Then dead silence. Faced with 30 un-answered invitations, a caterer asking for headcount, and other unquantifiable expenses, Boy and I then got out our telephone books and started chasing down those of the invitees who hadn’t responded. Not only was this inconvenient and time consuming for us, but it also delayed our ability to finalize plans with service providers during their busiest time of year.  Do your hosts the courtesy of responding.

2. When your host calls you to find out whether you are attending his party, do not answer “I don’t know.”

I recognize and understand that we are not always in control of our calendars at all times. However, if you are not certain of your ability to attend a party then you should decline the invitation. Failing that, but only under extraordinary circumstances, you should give your host a definitive date for when you will let them know one way or the other. The vagaries and whys and wherefores of your calendar are of little interest to your host at this point. He wants to know whether you are attending his party or not.

3. When you haven’t responded to an invitation and your host leaves you a voicemail at your home or on your mobile seeking one, you must do so immediately upon listening to the message, absent an unexpected residency in the IC unit of your local hospital.

Failure to acknowledge an invitation at this point is egregiously thoughtless and unspeakably rude and—to put it in printable words—does the exact opposite of promoting civil discourse with your putative host the next time you chance to see him in public.

4. After accepting an invitation, do not then call up your host the day of the party with a lame excuse about why you are not going to attend. And certainly not just as the party is scheduled to begin.

For large parties it is far better to be a no-show and then call the next morning with an abject apology.  As for dinner parties, just don't do it.  Period.

5. Dress appropriately for the party. Make an effort.

This is more of an issue for men than women, I find. It's fine to show up at a barbeque wearing shorts, but when the pleasure of your company is requested to a large party in a printed invitation you should assume that a certain level of dress is expected. In my house that means, at minimum, men over 40 should arrive wearing a sport jacket or blazer, and women should arrive made up and wearing something festive. In other words: dress for the party. While I didn’t expect all of our guests to arrive wearing cocktail outfits inspired by the characters in “Mad Men” (and was pleased to see that some of them did, actually), I was rather surprised that more than one of the men arrived unshaven, wearing jeans and a casual shirt. Just because this is my country house doesn’t mean that you should consider it appropriate to arrive at my party dressed like a bumpkin or a lumberjack. Consider the type of party you are attending, and dress appropriately.

6. Do not feel compelled to arrive bearing a gift.

Perhaps your mother told you that “nice people” always bring something to a party--an "hostess gift"--but in our case it is really not necessary. For us the pleasure of your company is sufficient.  I certainly won't object to receiving a small gift, but I don't expect it.

7. Circulate and introduce yourself to people you don’t know.

Don’t just stand there speaking only to your wife/spouse/significant other/best friends. Circulate among the rooms and engage new people in conversation. This is a party, not a family reunion.

Leave your worries at home. Conversation at parties should be light-hearted, topical, or amusing.  It is not the venue for describing in detail the miseries of your gallstones ordeal.

9. Enjoy what food and drink is provided, and do not seek special treatment.

Your hosts have gone to considerable effort and care in selecting the food and drink they are offering at their party. Do not ask for red wine or hot tea when none is offered, and do not complain when there is food on the menu that you don’t care to eat. Either choose from the selection of what is being offered to you or abstain from ingesting it. You are not at a restaurant, and the caterer is not there to indulge your whims.

While Pompey is adorable and a true professional when it comes to procuring treats, please do not feed him cheese and canapés at my party. It can have disastrous consequences, particularly when several dozen of you do it.  Do not feed the pets, no matter how cute they are.

No explanation needed (as per ~LPC).

This is a follow-on to the previous admonition. Sometimes it’s appropriate to stay on with the after-party set, if there is one, and sometimes it isn’t. Better to err on the side of leaving early than too late.

13. If, for whatever reason, you are a no-show at the party after having accepted the invitation, you must call the host the next day and apologize.

And the excuse better be a good one, whether made up or true, such as illness, a family emergency, or that your house burned down.

14. Within 48 hours of attending the party, you should contact your hosts and thank them.

Either by telephone, email, or mailed note. It generates good will. Your mother was right on this one.

In closing, while some of my readers may chafe at the number of outlined rules and dismiss them as the ravings of a persnickety stickler for out-moded rules of etiquette, they are, in fact, the considered result of my many years of experience and observations as both a popular guest and a generous host. Each was prompted by a specific incident or series of incidents at parties that I have either attended or thrown over the years.

Following these rules is actually quite simple and straightforward and will insure that both you—as guest—and your host will derive maximum pleasure in each others’ company at parties for many years to come.
Posted by Reggie Darling at 8:09 PM