Antiques Week (or Americana Week) is the name given to the third week in January in New York City when hundreds of antiques and decorative arts dealers and thousands of collectors descend on Manhattan for an orgy of antiques shows and auctions. While no longer exclusively focused on Americana, the shows have in many cases evolved over the years to also include English, European, and Asian offerings.  Boy and I make a point of attending most of the shows and auctions held this week and we’ve been quite successful in adding to our collections at them over the years. I don’t know whether it’s like being a kid in a candy store or a drunk in a bar, but for those of us who enjoy looking at and collecting antiques, this week is heady stuff indeed. 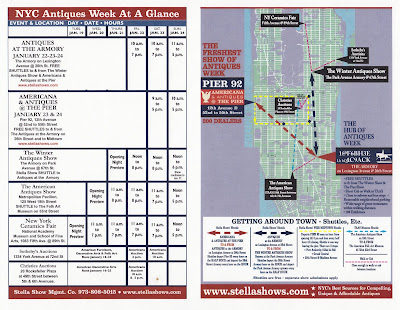 Here’s a run down of the shows and auctions running through this weekend:

The Winter Antiques Show – January 22-31
This is the granddaddy of all the shows held during Antiques Week.  Held at the Park Avenue Armory at 67th Street, the Winter Show is the most prestigious antiques show in America and has been held annually for over 50 years, benefitting the East Side House Settlement. Its opening night preview (thursday) is one of the major events of the New York social season. The Winter Show’s roster of dealers—drawn from the highest echelons in the antiques business—includes those showing American, English, European, and Asian antiques, and more recently 20th century fine and decorative arts. Everything at the Winter Show is fully-vetted for authenticity by committees of experts. Truly amazing stuff and stratospheric prices. Every year they feature a loan exhibition from a museum or collection, and this year they are showing highlights from the collections of Historic New England (formerly and better known as the Society for the Preservation of New England Antiquities, or SPNEA). Go early so that you are sure to see the best of what's on show and also the gorgeous flowers from the opening night preview in all their glory. We’ve bought things at the Winter Show over the years, but—given its very lofty prices—we primarily go to the show to look and educate our eyes. We like going there after work so we can have cocktails while wandering around the aisles. Very civilized.

The American Antiques Show – January 21-24
This is a relative newcomer to Antiques Week, sponsored by the American Folk Art Museum, and held in Chelsea at the Metropolitan Pavilion. This show has 50 or so of this country's top Americana dealers displaying mostly museum-quality American folk art, furniture and decorative arts, with some native American arts thrown in. Far more focused on that market than the Winter Show, and with prices that in many cases are almost as high. Cocktails are available to help mitigate the sticker shock.

The New York Ceramics Fair – January 20-24
Also a fairly recent addition to Antiques Week, the Ceramics Fair is held at the jewel-like National Academy Museum & School of Fine Arts (formerly known as the National Academy of Design) on upper Fifth Avenue. This show features more than 35 dealers drawn from America, England, and Europe showing porcelain, pottery, and glass. We enjoy this show a lot as it covers a fairly broad range of offerings and price points, and—unlike the Winter and the American Antiques shows—it is possible to find something here for only a couple hundred dollars if you look hard enough, although the average ticket price is much higher. Cocktails available.

Here's a photo of a small figure of a hunter that Boy bought on wednesday evening at the Ceramics Fair from Earle D. Vandekar of Knightsbridge, Inc., http://www.vandekar.com/ to add to our collection of early 19th-century English pearlware figures at Darlington: 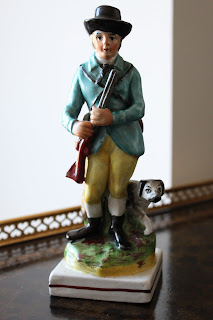 Sotheby’s and Christie’s Americana Sales – January 22-23
These sales have been held in New York for many years, and are a cornerstone of Antiques Week. Walking through the previews at the auction houses’ New York rooms earlier this week Boy and I concluded that Christie’s outshines Sotheby’s this year (as it has increasingly in recent years) in the quality and selection of its offerings. Plus the specialists working in the rooms at Christie’s are more welcoming.  Sotheby’s did score the Elinor Gordon sale, though. Sale estimates across the board are very low this year, designed to attract potential bidders. Cocktails only during special previews.

Antiques at the (Other) Armory Show – January 22-24
This show is held at the 26th Street Armory at Lexington Avenue. No relation to the Winter Show, this is a much more affordable show featuring around 100 dealers in American, English, and European antiques and decorative arts. Definitely not vetted. Good deals abound. Don’t expect cocktails.

Americana & Antiques at the Pier – January 23-24
Held over the weekend on Pier 92 at the Hudson River, this is the largest and most affordable show (more of a bazaar, really) held during Antiques Week, with over 200 dealers showing a very broad range of American, English, European, and Asian antiques, decorative arts, and in some cases junk. Come with an open mind because who knows what you’ll find. Scores are to be found – but get there early because dealers from the other shows will be in line at the opening to snap up the best of what’s available and mark it up to sell at the more expensive shows across town. Wear comfortable shoes and bring your checkbook. Forget cocktails.
Posted by Reggie Darling at 6:30 PM