Yesterday afternoon Boy decided to go into the nearby town and visit the antiques and other shops it is generally known for, as we have a number of social obligations in the next week that require us to arrive bearing gifts. I stayed at Darlington to tend to the more mundane projects that frequently occupy one’s time on a Saturday afternoon.

The antiques stores in our nearby town range from ones selling the basest of junk to those that cater to high-end decorators and collectors from Manhattan and beyond, along with everything in between. Lots of new objects cycle through the shops every week, so you never know what you are going to find. Regular visits can, at times, yield unexpected treasures.

I happened to be standing near a window when Boy drove up, and saw that he had apparently either bought something in town or had it with him on approval. At first it appeared to me that Boy was carrying a wood box, but I soon realized that he was carrying a painting in a frame, and that I was seeing its backside. 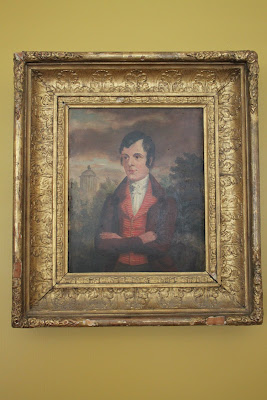 “Look what I have!” Boy said when I met him downstairs, and turned the picture around so that I could see it. What met my gaze was a charming, early-19th century portrait in little (10" by 12") of a young Englishman wearing Regency clothing, standing in a pastoral landscape with a classical rotunda in the background. Boy found it in a shop in town owned by a family of “pickers” whose quirky selection of well-priced, often early-19th century objects generally yields up one or two purchases for us each time we visit. The painting Boy had in his hands had only just arrived in the shop that day, and he immediately bought it as it was not only charming, but very well-priced. Unfortunately the frame it was offered in, while probably original, was too busted up to be worth restoring so Boy left it with the dealers. He then headed up the street to another shop that specializes in selling antique picture frames and mirrors--coincidentally owned by another member of the same family--and found a period one (also very well-priced) that was not only perfect for the painting, but fits it as well. While the frame needs restoration (it is missing bits and has an unfortunate coat of gold paint), all the portrait needs is a cleaning and re-varnishing. 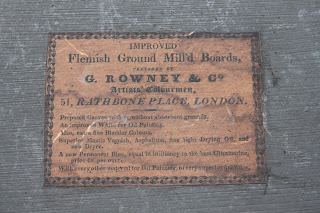 The back of the painting bears a period label for G. Rowney & Co., an artists' supplier located at 51 Rathbone Place in London.  Basic Internet research revealed that George Rowney & Co. was formed in 1832, which confirmed our view that the painting was likely done in the 1830s. The company survives today as Daler-Rowney, Ltd., which it was renamed in the 1980s when G. Rowney & Co. merged with the Daler Board Company.

We have temporarily hung the little portrait in our dining room at Darlington where it looks marvelous hanging among the room’s other early-19th century paintings and mahogany furniture. When restored I am sure that our young Englishman will be worth many multiples of what Boy paid for him. However, we are in no hurry to send the painting and its frame out for restoration just yet, as we are enjoying its present somewhat crusty condition.

Have you found any “scores” lately?

Photos by Boy Fenwick
Posted by Reggie Darling at 5:08 PM