Boy was downtown Friday afternoon and happened to pass by Chanterelle, the storied restaurant in Tribecca owned and run by the husband and wife team of David and Karen Waltuck. Chanterelle was holding a "gone out of business sale" and was selling off its remaining inventories of china, stemware, furniture, and most of everything else. Boy learned that the Waltucks had closed Chanterelle in July of last year for renovations, and then decided to close it for good in November, a victim of the city's difficult economy. At the sale Boy's companions bought some plates and champagne flutes, and Boy picked up some matchbooks and paper covered toothpicks for me as he suspected that I might be interested in writing here about Chanterelle--the restaurant that was largely responsible for revolutionizing fine dining in Manhattan. 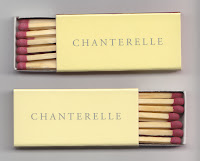 For those of you who may not be familiar with Chanterelle, it was--in its day--the equivalent of Thomas Keller's French Laundry, one of the highest temples of culinary excellence in America. When it opened its doors in its original location in SoHo 30 years ago, Chanterelle established itself as one of the city's first real competitors to the uber-expensive classic French restaurants that then held Manhattan in a vice-like grip (see my posting on La Grenouille for more on that). Chanterelle brought to the city a fresh, even revolutionary approach to dining that New York had never seen before: superb, innovative cooking inspired by classical French dishes but infused with uniquely American ingredients and sensibilities, served in a modern (for the times) interior by a passionate wait-staff culled from the arts and foodie worlds, and overseen serenely by the gracious and very modern wife of the chef. The Waltucks took the classic, but increasingly-ossified French restaurant model, stripped it down to its barest essentials (out went the withering black-tie waiters, the operetta-ish service, and the over-decorated fussified interiors), and rebuilt it to be a thoroughly contemporary and welcoming restaurant experience producing some of the best and most innovative cooking found anywhere in America. The restaurant’s menu covers featured original art by some of the most important contemporary artists of the 20th century. 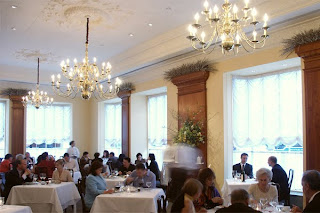 Chanterelle in happier times
I probably ate at Chanterelle a dozen and a half times over the years. The first time I ate there it was still in its original SoHo location, and I was taken there, along with my brother Frecky, for dinner by our father. The restaurant moved shortly thereafter to Tribecca to a much larger space in a cast iron-fronted industrial building with soaring ceilings. To be honest, I always found the decor at Chanterelle somewhat odd: the main dining room was severely decorated with its floors covered with gray industrial carpeting, tables surrounded by Queen Anne-style chairs, reproduction brass Dutch 18th-century style chandeliers hanging from the ceiling, and walls adorned with salvaged wooden pilasters. The room was softened, though, by lovely sheer silk window shades and gorgeous arrangements of flowering branches. Although thought-provoking, I always found the juxtaposition of the plain utilitarian with the sumptuous at Chanterelle somewhat at odds. 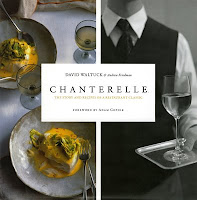 The Chanterelle cookbook
But one didn't go to Chanterelle for the decor, one went there for the experience and the food, which was sublime. The tables were spread wide apart (part of the luxury of Chanterelle was the space) and the waiters performed a highly-ritualized dance more akin to performance art than waiting tables. They announced the restaurant's specials in excited, breathy, hushed-tones, almost as if they were reciting a love sonnet. And it was appropriate that they did so because the food was so marvelous as to inspire poetry--every mouthful a revelation of texture, taste, and flavor. One left Chanterelle feeling as though one had just dined in a temple of the culinary gods.

Over time, though, what made the Chanterelle experience unique was so relentlessly copied by countless imitators in the City and elsewhere that it became increasingly difficult to distinguish Chanterelle from the many other expensive restaurants that now also provided its fusion of haute French and new American. That Chanterelle was the inspiration of so much of what came afterwards was increasingly lost on many diners and critics. It didn't help that the overhead required to sustain the Waltuck’s vision came at a very steep price, and the cost of dining there became increasingly stratospheric. The last time I ate dinner there, over a decade ago, the bill came to more than $400 a head, a price tag only surpassed by a dinner Boy and I had at French Laundry several years later. While I had lunch at Chanterelle several times thereafter over the subsequent years, I was disinclined to return there for dinner given its lofty tariff and a restaurant scene in New York that had evolved to include many other excellent alternatives to choose from.

But it was with regret that I learned of Chanterelle's demise, and that its final days were devoted to a sidewalk sale of its contents. It seemed such a sad final rebuke to this trail-blazing legend. I'm glad that Boy picked up some matches and toothpicks for me, as they are mementos of one of this country’s greatest culinary pioneers of the latter part of the 20th century. I wish the Waltucks the best of luck in their new endeavors. Thank you for the memories.