Today (Sunday) marks the official end of Antiques Week here in New York City, with all of the shows closing except the Winter Antiques Show, which continues through the 31st. Between the two of us, Boy and I hit every show and preview held during the week. Overall we thought the top two shows, the Winter Show and the American Antiques Show, were slightly less sumptuous than in years past.  Not a whole lot, but just slightly so. While there were still plenty of offerings at these two top shows with jaw-dropping prices, I would say that the prices posted weren't so extraordinarily stratospheric this year as to defy comprehension altogether (with some notable exceptions). Also, there were more offerings at these shows at the lower end of the pricing spectrum vs. previous years.  Many of the dealers at the Winter Show and the American Antiques Show informed us without any prompting that they were willing to negotiate prices, and several volunteered without our asking that they would be happy to arrange terms and payment schedules.  We occasionally hear this from dealers we've bought from in the past, but we heard this from several dealers at both shows from whom we've never bought anything. There was, I believe, hunger in the aisles.

Boy took clients to the Winter Show, the (Other) Armory Show, and the Pier Show, and was successful in finding purchases for them at each of these shows.  We wound up buying things for ourselves at only two of the shows, the New York Ceramics Fair and the Pier Show.  We came very close to buying a painting at the Winter Show, but decided not to after debating it over a boozy dinner. I wonder, though, will I recall it in the future as one of the ones that got away?

Yesterday morning Boy and I got up bright and early and drove over to Pier 92 on the Hudson River where we met up with one of his associates and a current client to attend the first day of the Americana & Antiques Show at the Pier. We wanted to get there before it opened so that we could shop before it got picked over, which happens within an hour or two.  As I suspected, I recognized any number of people standing in line waiting to get in as dealers from the other more expensive shows.  There were also the usual cast of characters that one sees and comes to recognize.

Once the gate opened I peeled off from Boy and his client to see what I could find on my own, since we had differing agendas.  We each did the show twice: the first time was a quick run through of the 200 dealers, searching for specific items or categories, and the second time was at a more studied pace, examining the offerings more closely.  We would compare notes when we ran into each other, and even took a quick water break and sat down at one point, but we spent the better part of the three hours we were there intensely focused on taking in everything the show had to offer.

I was happy to see that the quality of the dealers and their offerings was better at the Pier Show than I had expected, and Stella Management is to be commended for that.  There was little true junk on display, and most of the booths yielded up one or more offerings that I would be delighted to take home.  Prices were very reasonable, everything was negotiable, and the dealers were intent on moving the merchandise.

So here's what Boy and I found: 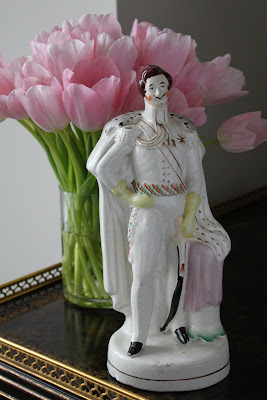 In addition to collecting early 19th-century English Staffordshire pearlware figures, Boy and I also collect somewhat later Staffordshire figures, focusing on ones that have only a modest amount of decoration on them.  I believe this figure is likely Prince Albert, and loosely based on the Winterhalter portrait of 1842. 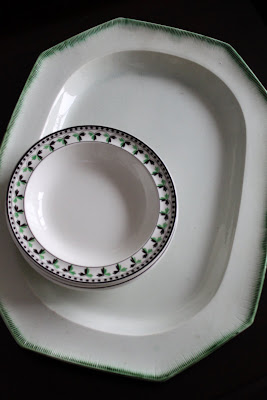 I couldn't resist buying this Yale banner and also a Vassar pennant to pin up in the small barn we use as a glorified gardening shed at Darlington. The Yale one, which the dealer said dates from the 1940-50s, says "WHEN BETTER WOMEN ARE MADE YALE MEN WILL MAKE THEM".  I'm not exactly sure what it means, but I suspect that if I were to hang it in my office at the Investment Bank I could well find myself remanded to Human Resources. 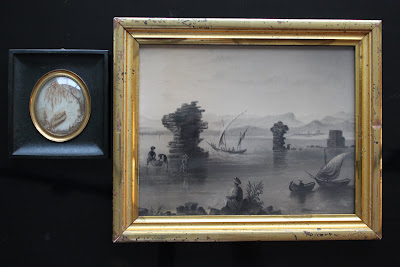 Boy and I have been collecting sandpaper pictures for as long as we've owned Darlington and are always on the lookout for interesting examples.  Boy found this charming one (the larger of the two pictures shown here) at one of our favorite dealers of sandpapers. 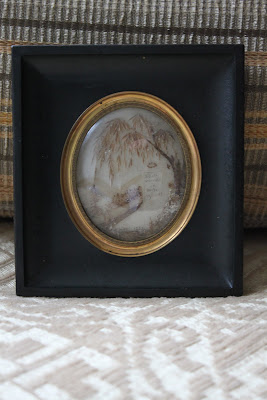 Here's a close up of the smaller picture, a mourning piece dated 1847 and made with human hair with this inscription on the tombstone at the head of a recently filled grave: "Triste souvenir de notre enfant!" 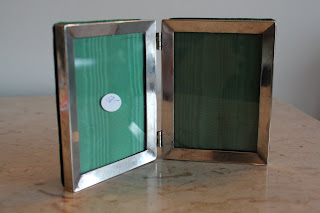 I've been watching for old silver frames to upgrade the ones I have for photographs of family and friends (see "Our Black Friday" December 10th posting).  I found this little velvet-backed double frame and got it for only $50, which is a deal, since the ones I come across like this usually run $150-200.  Furthermore, the velvet backing is in perfect condition, which is rarely the case. 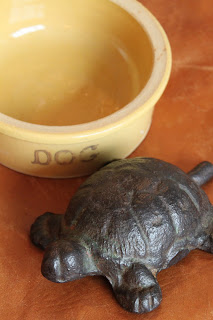 Just as we were leaving the show, Boy grabbed these two useful finds.  The first is a vintage earthenware dog bowl for Pompey, and the second is a cast-iron turtle to add to our collection of paperweights for the screened porch.  I'll be doing a posting on our growing collection of porchiana when the weather warms up later this year.

So that wraps up my overview of what we bought at this year's Antiques Week.  We enjoyed ourselves immensely at the shows and we are satisfied with what we found.  I hope you like our cargo, too.


All photos by Boy Fenwick
Posted by Reggie Darling at 7:36 PM