My First College Mixer; Or, How Reggie Got Slapped...

When I was 14 my parents decided that it would be a good thing for me to spend the weekend visiting my older brother Frecky at Yale, where he was at the time a member of the freshman class.  My parents thought that a visit to the college would help spur me on to the academic and athletic accomplishments required to make me a more promising candidate to ultimately attend Yale, following in the footsteps of not just my brother, but my father and grandfather before him, along with numerous cousins, uncles, and other forbearers.  Frecky, under considerable pressure from my parents, reluctantly agreed to go along with this, and so I found myself on a November Saturday afternoon in Durfee Hall on the Old Campus at Yale, where my brother shared a room with two of his former classmates from Exeter. 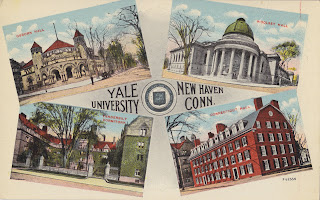 Frecky wasn't quite sure what to do with me that weekend, other than taking me to a football game at the Yale Bowl, followed by dinner in the Freshman Commons with his roommates.  Over dinner, though, a plan was hatched that we would all attend a "mixer" in one of the residential colleges later that evening, basically a dance where several busloads of girls were shipped in from one of the Seven Sisters schools, in this case Mount Holyoke.  While Yale was co-ed by that time, there were not yet enough women undergraduates to obviate the need to import girls from other schools to fully populate such adolescent crushes. 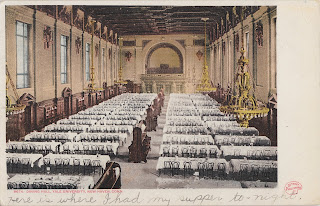 As soon as we got to the mixer Frecky ditched me to see what conquest he could muster up that evening and I found myself alone sitting at the edge of the hall, sipping a punch of orange flavored Kool-Aid and grain alcohol, looking around the room to see what was what.  The place was initially fairly sparsely populated, dark, and smelled of dining-hall food, and beer, but over time became crowded as more and more undergraduates came in and started dancing to the DJ's soundtrack of rock-and-roll and R&B hits popular at the time. 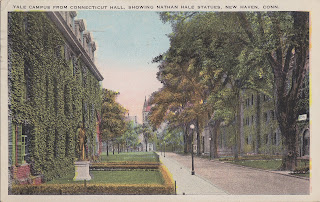 After a while, fortified with several more helpings of grain alcohol punch, I decided that I would take my show on the road. I figured if my brother could pick up a Holyoke girl, so could I.  So I started a prowl around the darkened room to see who or what I could find. After being rebuffed by several sets of uncooperative girls I came across a group who, if not welcoming of my approach, at least tolerated it.  So far so good.  I zeroed in on one of the girls who looked to be the youngest of the bunch and started talking with her.  I learned she was a freshman at Holyoke and this was her first time at Yale.  She was pretty, and nice, and seemed interested in speaking with me.  Skating on thin ice, I had to think fast.  I decided that it would be too dangerous to claim that I went to Yale, so I cooked up that I was a freshman at Dartmouth (?) and was visiting my brother at Yale for the first time.  I figured that was a decent cover, since I wouldn't be expected to actually know all that much about Yale.  I asked her to dance, and much to my surprise she agreed and I found myself, against all imaginable odds, shaking it on the dance floor with this girl to the strains of Earth, Wind and Fire's "Boogie Wonderland".  The giddy experience of what I was pulling off, combined with the effects of the grain alcohol, the pounding music, and the swirling lights, made the experience verge on magical to me, if not hallucinogenic.  One dance led to another, and I recall Frecky and his roommates egging me on as they twirled by with their dance partners.  After a while it was time for a break and I suggested to my companion that we repair to the punch bar for some refreshment and a breather. 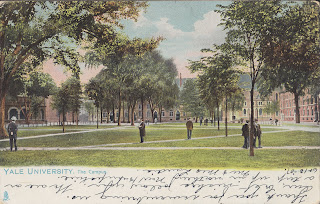 We were met at the bar by a gaggle of my date's friends from Holyoke, who immediately pulled her into a huddle, with one or two of them sneaking suspicious glances at me over their shoulders.  After a few minutes my "date" re-joined me, decidedly more-reserved than she had been when we left the dance floor.  After accepting a glass of punch, she paused and then started asking me questions, with her friends looking on.  What dorm was I in at Dartmouth?  What classes was I taking?  How many credits was I expecting to complete this semester?  Did I know So-and-So?  Where had I gone to prep school? 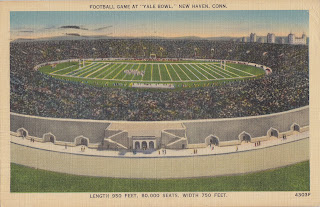 Recognizing that I was on a base of shifting quicksand I tried to bluff my way through her questions, but it was clear to me that the jig was, in fact, up and I had been found out.  Blistering under the laser intensity of her increasingly angry interrogation and the mounting "off with his head" chorus of her friends, I finally confessed that I was not a student at Dartmouth, but rather only a ninth-grader visiting my freshman brother at Yale.  After a moment's beat--which seemed to last an eternity--she recoiled in horror, betrayal, and humiliation and administered one of the most powerful, Academy-Award-inspiring, full-body-force slaps to my face that I to this day can recall, and turned and fled from the room screaming through her tears of rage "...and he's only fourteen!" 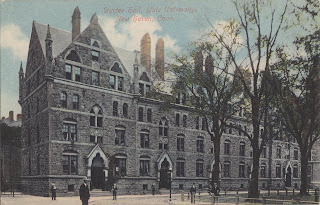 At this point, Frecky fortunately re-emerged from his own cat-prowl, licking his chops, and scooped me up and took me back to his room on the Old Campus, shouting with laughter, where we agreed--after consuming a six-pack of beer and a bong hit or two--that this was a story that was better left untold.

...at least to our parents.


All antique and vintage Yale postcards were a gift to Reggie from his dear Sister Darling
Posted by Reggie Darling at 2:14 AM