After my mother died I and my siblings went through one of life’s most invested rituals, of going through her possessions and dividing them up amongst ourselves.  One of the things that I came across at the time was a small cardboard box containing several items that were identified as having at one time belonged to me as a boy.  Among the toys and childish ephemera was a pair of small brown leather shoes that had originally been worn by my older brother Frecky, and then handed down to me.

I grew up in such a time, world, and family that “hand-me-downs” were expected to form the nucleus of my wardrobe as the youngest of four children.  It wasn’t until I went away to boarding school in my mid-teens that the majority of my clothes were actually bought for me new from a store.  Up until then almost everything I wore--except for socks, underwear, and shoes--was either handed down to me from my older brother, acquired at the Junior League “Nearly New Shoppe” where my mother used to volunteer, or bought at the annual jumble sale at the country day school that I and my brother attended.  Why buy a new pair of Brooks Brothers khakis for Reggie when perfectly good, sturdy ones that Frecky (or others) had outgrown were sitting on a shelf, unused?

I recently came across the little shoes again when rifling through a drawer in the secretary-bookcase in our Snuggery at Darlington, and pulled them out to examine them.  Unlike the crude children’s shoes made today with plastic soles and Velcro-closings, the shoes I had worn as a child are a marvel of construction, beautifully made and sewn with tiny stitches, miniature versions of expensive, bench-made grown-up shoes.  I wish more of the shoes I own today were as well made!  However, my little shoes were a bit forlorn-looking, having lost their laces long ago. 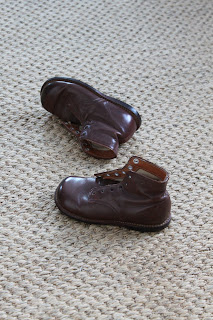 My poor little unloved shoes
I decided that I would rectify this and place them on top of the chest of drawers I use in our bedroom where I would enjoy seeing them.  But that was more easily plotted than executed.  I brought the shoes back to the City with me and one day during lunchtime went to find a pair of laces for them.  My first stop was a shoe repair shop near my office that had nothing so diminutive as to fit my little shoes, and I returned to my office with my mission unaccomplished.  My next stop several days later was a carriage trade children’s shoe shop on the Upper East Side, but they didn’t even stock extra laces, much to my surprise.  However, they referred me to a shoe repair shop in the neighborhood as a possible source, but cautioned me that it was unlikely that I would find laces for my shoes anywhere because “they don’t make them like that anymore.”  Fortunately the proprietors of the shoe repair shop had a shoebox of discontinued sets of laces under the counter, and I found a pair among them that fit my little shoes perfectly.  They thought it was a stitch that the shoes were mine. 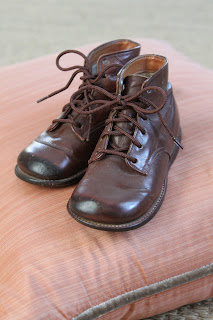 So much better, thank you
Don’t you think my little shoes look quite spiffy in their new laces?
Photos by Boy Fenwick
Posted by Reggie Darling at 2:53 AM