We Interrupt Our Regularly Scheduled Programming...

...To report on our experience this evening of stopping in at Gino's Restaurant in Manhattan for a drink on our way home from work.  For those of you who may not be familiar with Gino's, it is an old-style red sauce and spaghetti Italian joint up the street from Bloomingdales on Lexington Avenue.  Located in the same spot "since 1945", Gino's is an institution in New York, and is one of the last remaining restaurants of its type on the Upper East Side, if not Manhattan.  Widely reported in the media as closing at the end of this month, Gino's is beloved among New Yorkers of "a certain age" as a dependable spot for stiff drinks and reasonably-priced, basic, old-school Southern Italian fare.  Justifiably famous for its interior decorated with cherry-red wallpaper covered with black and white zebras (and not much else), Gino's is a welcome throwback to a decidedly different era. 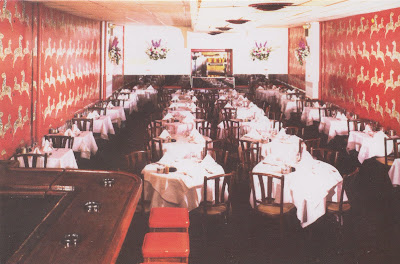 Postcard of Gino in 1991 (photo by Frederick Charles)

The first and only time I dined at Gino's was in my twenties, when I was taken there for dinner by a friend of my parents who lived nearby, and who had a charge account at the restaurant since they didn't take credit cards in those days.  My host was a single woman in her late 50s, a friend of my mother's from boarding school, and I recall she wore a black cocktail suit that evening with a diamond brooch and her hair in the classic "Vassar cut" that she had likely sported since the 1950s.  Very Mary McCarthy.  I don't recall all that much about the evening except that it was well-fueled with copious amounts of cocktails and wine, and dinner was basically a blur.  While I enjoyed myself I wasn’t in a hurry to return as I was quite a bit younger at the time than its more "mature” habitués. 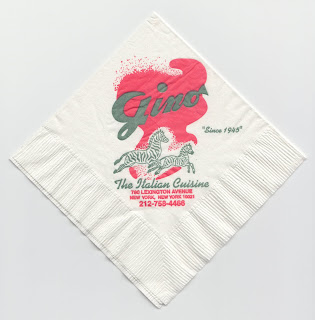 So when I read recently that Gino's was set to close later this month, supposedly a victim of the recession, I decided that I would drop in to pay my respects before its doors shut for the last time.  Fortunately, a business meeting that I had in midtown this afternoon ended early enough that I could pick up Boy at his office a few minutes before 5 pm, and we headed over to Gino's to see what was what. 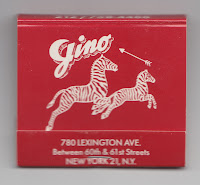 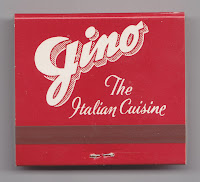 We arrived there to find a cluster of hard-drinking 10021 regulars at the bar.  Settling in to the remaining empty barstools we ordered a round of martinis and surveyed the joint.  Since it was only shortly after 5 pm it was not surprising that only a few of its many tables were occupied by diners. I was assured by the friendly barman that it would soon be full of regulars tucking in to Gino’s vast selection of easy-on-the-wallet, traditional Italian favorites.  The zebra wallpaper really is quite marvelous (and has, I believe, been recently re-issued by Scalamandre), but doesn't entirely mitigate the fact that the room is largely otherwise devoid of charm with a dropped ceiling of acoustical tile and fluorescent tube lighting.  Nonetheless Gino really is quite appealing in a retro way, what with its staff of late middle-aged waiters sporting short burgundy jackets and black bowties, and the room decorated with the remnants of a dime-store Christmas right out of a 1950s photograph. 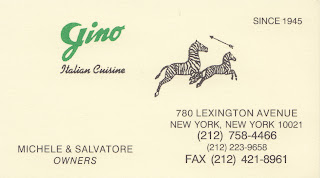 Boy and I spent a pleasant half hour speaking with the other patrons at the bar and learned that reports of Gino's imminent death may be somewhat premature.  Apparently the place has been packed every night since it was published that it will be closing at the end of this month, and there may be a reprieve in its future.  I'm happy to learn that may be the case, as I think it would be a shame to send this old zebra to the glue factory any time soon.