The Pompey Chronicles, Part I: The Pursuit of the Pug

In honor of the Westminster Kennel Club Dog Show, taking place February 15-16 at Madison Square Garden in New York City, I am posting the first of a four-part series "The Pompey Chronicles".  For those of you who haven't been following this blog, Pompey is the name of our most-adored pug dog.  He is the subject of this series, which I shall be posting over the next several weeks.  I hope you like it.

Shortly after Boy and I acquired Darlington House we found ourselves longing to own a dog.  While it was acknowledged that I could have only limited responsibilities in raising such a charge, given my commitments at the Investment Bank, Boy had recently left the corporate world and was in a position to spend time raising a puppy. 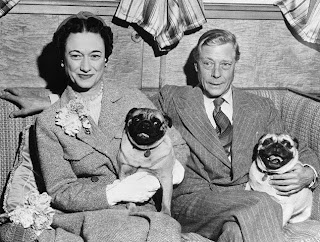 The Duke and Duchess of Windsor and pugs, 1954
photographer unknown
I grew up in a house where the standard poodle was the house dog.  Not the hairdo ones you see on television at the shows, all pompoms, shaved skin, and exposed genitalia.  Our poodles had what is known as a “kennel cut”, a cut akin to the “wash-and-wear” or “drip-dry” clothes of the 1960s whose chief attraction was their ease of maintenance.  I liked the poodles that I lived with as a boy well enough, they were smart and gay, but I never really cottoned on to them as my breed of choice.  Boy grew up with cocker spaniels and had the same regard for that breed as I do for poodles.  Nice enough, but what other options were out there for us? 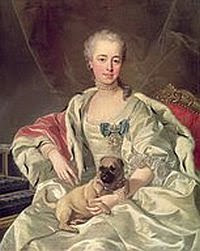 Princess Ekaterina Golitsyna and Pug
painted by Louis Michel van Loo, 1759
Pushkin Museum, Moscow
So we cast our nets about to see what kind of dog we wanted.  We talked about it with friends and family and read books that matched dog and owners’ temperaments, and rapidly narrowed our search to a few breeds.  Our dog needed to be compact in size, since it would travel with us by car to and from Darlington House and Manhattan each weekend; it shouldn’t require a lot of exercise; and it shouldn’t be a breed that was engineered for a profession that required endless digging, fetching, or herding.  While Boy thought a soft-coated Wheaton would be ideal, I preferred a pug. 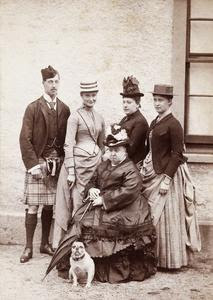 Family group with Queen Victoria and one of her pugs,
Balmoral, 1887; photographer unknown
The Royal Collection Her Majesty Queen Elizabeth II
I had developed a fondness for pugs over the years.  Not only did I like the way they look – compact in size, but cobby and solidly built – but I was also attracted to their playful personalities.  Their close association with English and European royal houses was another plus.  Besides, they were originally bred to be companion dogs, so they need almost no exercise and are hardwired to want to be with their masters at all times, ideally snuggled up next to them or – even better yet – in their laps. 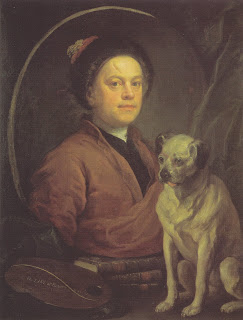 Self Portrait: The Painter and His Pug
painted by William Hogarth, 1745
National Portrait Gallery, London
I thought it best to take matters in my own hands and started the search to find a pug.  It was in the nascent days of the Internet, but I started my search there and came across the website of the Pug Club of Greater New York, Inc., http://newyorkpugclub.org/.  Scrolling through that site I came across the name and telephone number of the club’s secretary.  I called the number one day and was surprised when a woman answered the phone who admitted to being that official. 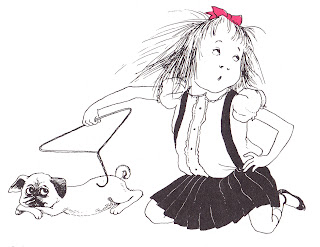 Weenie and Eloise, as drawn by Hilary Knight
for Kay Thompson's Eloise, published by Simon and Schuster
After I introduced myself to her I said that I had found her name on the club’s site and was calling her because I was interested in acquiring a pug.  "Do you have any recommendations?" I asked.  She responded, “Well good luck.  None of the girls will have anything to do with any of the boys so no one’s having a litter that I know of.”  After I persisted, she suggested that I call a breeder in Connecticut who might know of a litter.  I did so, and after several false starts located a breeder in northern Massachusetts where they had a litter with three male puppies that had not yet been spoken for. 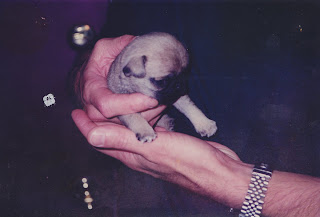 Boy holding the tiny four-week-old "Scamp"
photo by Reggie Darling
Boy and I drove up that weekend to see the puppies.  They were very young, only around four weeks old, and as tiny as kittens.  Even at that tender age they had distinct characters.  The first was handsome and regal, larger than the other two; we called him the Lion.  The second was even more handsome, beautiful really, but just kind of sat there; we called him the Ken Doll.  The third was smaller than the rest, about three-fifths scale, and had a bubbly, curious demeanor; we called him the Scamp.  Needless to say, Boy bonded with the Scamp, so the Scamp was the one we chose.  Not quite as perfectly formed as his brothers, who the breeder described as having serious show-dog champion potential, the Scamp was considered to be a fine pet-quality dog. The breeder was happy for us to have him once he reached eight weeks, so long as we promised never to breed him. 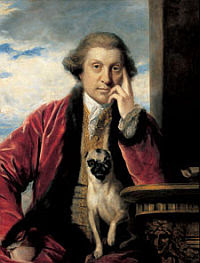 George Selwyn and Pug
painted by Joshua Reynolds, 1766
Tate Gallery, London
And that’s how our most-beloved pug came into our lives.

Next week: Naming the Pug
Posted by Reggie Darling at 8:38 AM