A lot has been written over the years about the formidable Mrs. Henry Parish, II, better known as “Sister," the founder of the impossibly smart, now defunct, Parish-Hadley Associates decorating firm. 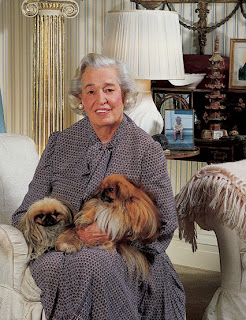 Mrs. Parish, as photographed for Architectural Digest
I've always had a passing interest in Mrs. Parish, not only because of her accomplishments and the lore surrounding her, which is considerable, but because she and my eldest sister Camilla both share the same nickname of "Sister."  As a small child my brother Frecky had a hard time pronouncing "Camilla" and instead called her the more easily pronounced "Sister," which stuck -- at least within our immediate family.  Outside the family Camilla is universally known by her given name, thank you very much.

The only interaction I had with Mrs. Parish occurred many years ago (well, how could it not?) one evening in Anne Rosenzweig's "Arcadia," an intimate restaurant on the Upper East Side of Manhattan considered at the time to be a jewel of culinary and decorative pleasure.  I was there that night as the guest of my dear friend George Pinckney, a debonair southerner, who generously took me there to celebrate my birthday, so this was a special treat and not a throw away, happenstance occurrence.

During dinner I had the eerie sensation that someone was talking about me, so I turned around to scan the half-empty room (it was July), and caught the gimlet eye of "Sister" Parish who was sitting in a banquette with of all people, "Slim" Lady Keith.  Given that I caught her with her mouth open, obviously making a derogatory comment about me or my companion, or the both of us, her mouth went slack as she aborted what she was saying.  While I had never met Mrs. Parish, I had in fact only recently met Lady Keith when invited to her apartment one afternoon for "tea" (that was what it was billed as -- the only thing tea-like was the color of the brown liquor served).

With that as fortification, I got up from my table and walked over to theirs.  Both looked up at me coolly but somewhat apprehensively as I approached them, a glimmer of "I've been caught, now what?" on their faces.  When I arrived I addressed Lady Keith, and reminded her that I had enjoyed spending an afternoon as her guest and what a lovely time I had and how pleased I was to see her this evening and hoped she was well?  She, with some relief, pretended to remember (she did a credible job of it, I recall) and turned and introduced me to her dining companion.

I smiled as our eyes met and said that it was a pleasure to meet the venerated Mrs. Parish, particularly on an evening such as this, my birthday, and how lucky I was to be my friend's guest in celebration of my milestone, for these were strange and exotic environs for a lad such as I to find myself in, and I hoped that her evening would provide her with but a fraction of the pleasure mine was giving me?


She looked at me with a mixture of hauteur and scorn, obviously putting on a show, and responded with a "Harumph!" and a dismissive "Yes, you may go now."  This prompted me to burst out laughing at her rudeness, which clearly unnerved her, and I turned and walked back to my table, smiling with the self-satisfied pleasure that I had, in fact, caught and then busted that tough old turkey.

For more on Lady Keith, see my December 20th posting "My Slim Keith Story"
Posted by Reggie Darling at 12:49 AM