Ballooning, Raking, and Pruning at Darlington

Early this Sunday, when I took Pompey out for his morning constitutional, I heard what sounded like gas jets turning on and off.  As many of my readers will agree, when one owns a house common sense indicates that such sounds merit investigation.  The noise was coming from the rear of our property, so that is where I went, and what did I find but a hot air balloon flying over our back yard!  I ran into the house to get my camera.  By the time I was able to snap a picture of it the balloon had traveled a distance, so the image I was able to capture is rather small.  Within a minute the balloon had vanished from my sight.  Although not clear from looking at the photograph, the balloon was made of alternating stripes of yellow and red cloth, and was very colorful. 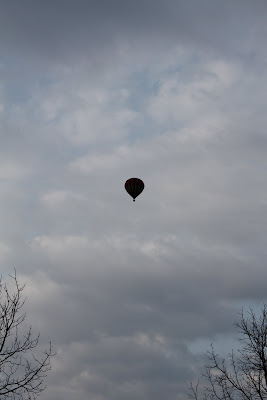 High above Darlington
Later that morning, Rich and Junior arrived to finish repairing the winter damage to our gravel drives.  Although gravel drives are beautiful to look at and delightful to drive on (the crunch of a well-tended gravel drive under tires is a very satisfying sound indeed), they require a considerable amount of maintenance, at least here in the American northeast.  A yearly ritual once the snows have subsided is to return the gravel that has been deposited on the surrounding lawns during plowing back on to the drive and then rake out the surface to reestablish a pleasing uniformity of appearance. 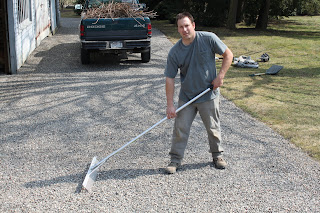 Rich raking out the drive

A job well done. The same view, before and after
(again, note tasteful snow markers)
Another spring ritual at Darlington is pruning the Hydrangea paniculata 'Kyushu' of last season's canes.  We leave the growth in place for winter interest, but it is necessary to prune back quite hard before the shrubs begin to push out new buds.  When pruned, they look almost Japanese in their severity.  Boy is the master pruner at Darlington--I have been forbidden from engaging in any pruning due to my less than perfect attempts at it in the past.  Boy spent the better part of both Saturday and Sunday mornings pruning the shrubs.  I love the way they look shorn of their canes, ready for a new season of growth. 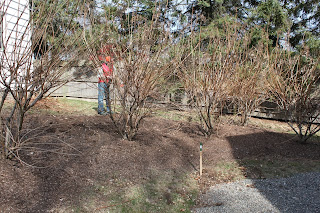 Boy beginning the pruning of our Hydrangea -- the "before" shot 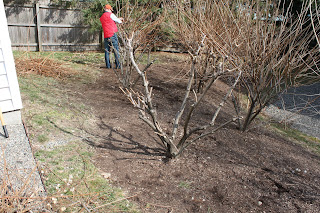 Two down, and nine to go 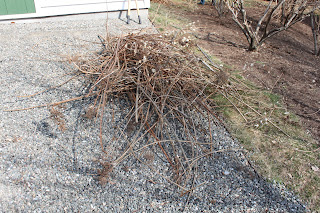 A pile of canes from one of the shrubs 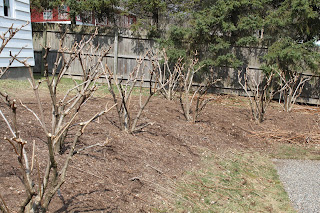 The fully pruned Hydrangea -- the "after" shot
Rest assured, these Hydrangea are hearty growers and will send out an abundance of growth.  By mid summer they will be enormous, luxuriant beauties, and covered with fragrant, frothy white flowers well into autumn.