In anticipation of Easter, I am posting a photograph of the Darling family going to Easter Sunday service back when we still lived in Grosse Pointe.  I think it was taken in 1960.  It was probably snapped by Granny Darling, my father's mother, who was likely standing at the entry of the church where my Grandfather Darling was the Rector.  Yes, one of Reggie's grandfathers was a man of the cloth. 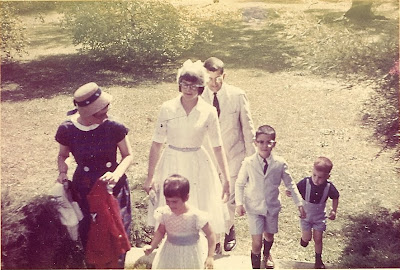 Mummy Darling in navy, Camilla (Sister) in white, Father Darling bringing up the rear
Hermione in white dress with blue sash, Frecky in short suit with glasses, Reggie in shorts
My parents were in their late thirties when this photo was taken.  My sister Camilla is the eldest of their offspring, and is seen here at 15 years old, at the brink of womanhood, and home from boarding school on spring break.  Frecky is the next eldest, followed by Hermione, and then me.

This is one of my favorite Darling family photographs. Mostly because I love what we are all wearing.  We are what I consider to be appropriately dressed for attending church on Easter Sunday, at least for the time.  When this picture was taken young women of the American upper-middle classes still wished to dress in styles their mother's approved of, and their mothers still aspired to dress like ladies.  Boys looked forward to turning in their shorts for long pants, and a jacket and tie was considered daily wear for men.  In other words, this photograph was taken before all Hell broke loose in this country and the vast majority of Americans decided to throw off acting or dressing like adults when they grew up.  Nowadays it seems to me that most people I see out in public aspire to dressing like overgrown toddlers, or tramps, or worse.

In this photograph my mother is wearing a navy linen dress with a white collar and oversized, decorative white buttons, and she is sporting a straw hat decorated with a navy ribbon embroidered with what I recall were little white flowers (she had that hat for many years).  Camilla is wearing an attractive, waisted white dress that demurely shows off her lovely figure, and she appears to be wearing a hat made of white flowers and netting.  Camilla is artistic and clever with her hands, and probably made her pretty chapeau.  My only surprise is that neither of them is wearing white cotton gloves.  I came across a box of half a dozen pairs of such gloves wrapped in tissue paper that my mother had saved for forty years when we emptied out her apartment after she died.  [Editor's note: according to Sister, who graciously supplied me with this image, she was carrying her white cotton gloves that day and suspects that Mummy Darling's gloves were hidden in the jumble of the coats she was carrying--see her comment as Anon 1:18 p.m.]

My father is shown taking up the rear wearing a poplin sack suit, most likely bought at Brooks Brothers, and brown oxfords.  To this day one of the sense memories from my childhood is the smell of the wax he used when polishing his shoes, which he took great care with.  Frecky and I are wearing little boy shorts outfits likely assembled from a combination of Best & Co. and the Junior League "Nearly New Shoppe" where my mother volunteered once a week.  Hermione is the little girl in the front wearing a white dress with a blue sash.

Do you ever find yourself wishing that people still dressed as well as we did in those days?  I do.  I understand that styles and tastes change and always will, but I still find it a bit "off" when I (infrequently) attend the Episcopal church near Darlington that I (sometimes) go to and see grown parishioners arrive for the services wearing tee shirts and jeans, even on High Holy Days.  At least they're attending church, I suppose.

I believe that grownups should dress like adults when visiting places that merit the respect of appropriate attire, and that too few in America do so today.  Did you notice that I used the word "respect" here?  Because that is what I believe appropriate attire conveys--respect for one's surroundings, respect for one's hosts, and respect for one's peers.  I am not so assinine as to think that today men should only wear suits and ties and women should wear white gloves and hats every time they walk out their front door.  But I do believe that the casualness of the clothing I see many people wearing today in better restaurants, the theater, concert halls, houses of worship, and private parties is disrespectful, and that people should dress up more when they go to such places and events.  Since when did the supposed comfort of the wearer trump all other considerations when determining what constitutes appropriate attire?

Believe me, I don't want to turn the sartorial clock back to 1960, I just would like people to make more of an effort to dress more thoughtfully and respectfully of the places they visit and the sensibilities of the other people they find there.  I recognize that there are times that it is appropriate for grownups to wear the tee shirts, cargo shorts, jeans, flip flops, sneakers, and baseball caps seen everywhere today, such as a quick trip to the corner store to pick up a quart of milk or when knocking about on a Saturday afternoon.  But in my view the preponderance of the grown Americans that I see out in public dressed so casually would be better served if they left such clothing to the sandbox set it was originally intended for, and made more of an effort to dress in an approximation of what used to be called an adult.  It would certainly be easier on the eyes of those of us who have to look at such people.

Tell me, am I preaching to the choir here?
Posted by Reggie Darling at 11:32 PM