For a fortunate few of us over the age of forty, the three words “Dinner at ‘21’” produce a frisson of anticipation and excitement like no other.


The entrance to the '21' Club
Image courtesy of same
I first heard of the '21' Club, the fabled Manhattan restaurant, as a boy from my parents, who went there for the first time shortly after they were married.  My mother referred to '21' as being a Mount Olympus of glamorous and expensive dining, and she and my father returned there from time to time when they visited New York over the ensuing decades.  She said that she would never forget the first time she crossed its threshold in the 1940s as a newlywed.  She felt a bit out of her element that night, wearing a Peck & Peck cocktail suit and a demure pearl necklace while the other women dining there were wearing what appeared to her to be the “latest French fashions” and “real jewels.”  But that added to the magic of the place, she thought. 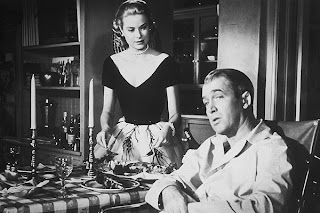 Grace Kelly serving Jimmy Stewart dinner from '21' in Rear Window
I also remember being wildly impressed as a boy one afternoon watching Alfred Hitchcock’s Rear Window on the black-and-white television in my parent’s study when Grace Kelly, in a cloud of couture chiffon, arrived at Jimmy Stewart’s Greenwich Village apartment with a waiter from '21' in tow, wheeling a cart containing dinner for the two of them from the restaurant.  Talk about glamorous! 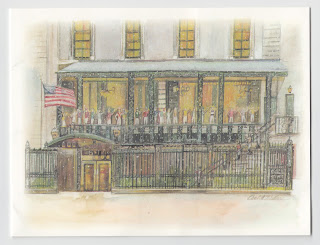 '21' Club facade
Image courtesy of same
The first time I went to '21' was as an undergraduate.  I spent a weekend visiting a classmate in New York, and his parents took us there for dinner.  I was beside myself with excitement when I found out where we were going (and that they were paying for it), and I felt incredibly grown up and swell dining in its swank rooms.  We ate in the Bar Room, an inspired fantasy of dark paneling, low light, and red-and-white checked table cloths, and noteworthy for the huge collection--hanging from the ceiling--of toy trucks, ships, and airplanes emblazoned with the names of major corporations, along with sports memorabilia and other mementos.  All of these had been given to the restaurant by its regulars culled from the top ranks of industry, entertainment, and sports. That evening Arlene Dahl (or was it Audrey Meadows?) was settled into one of the banquettes holding court with four men, and the room was packed with what appeared to this young man as an impossibly grown-up and sophisticated crowd. 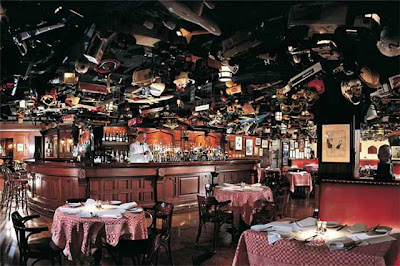 The Bar Room at '21'
Image courtesy of same
After college I would occasionally meet friends for cocktails at '21', but would never have dinner there because I couldn’t afford it on my junior banker’s salary.  At that time '21' attracted a big after-work crowd of suit-wearing men who packed the bar, drinking martinis, Manhattans, and the like.  It was a manly-man kind of place, the air full of cigarette smoke and testosterone.  My friends and I would get thoroughly soused while eating as much of the bar’s free peanuts and crackers as possible, and then repair to a nearby Irish bar to drunkenly wolf down a dinner from its far-more economically priced steam-table offerings. 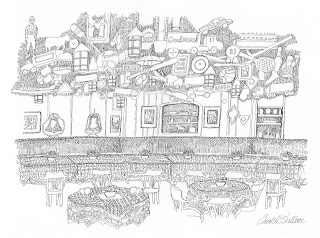 A view of the banquettes in the Bar Room at '21'
Image courtesy of same
Over the intervening years I was only a sometime visitor to '21', mostly for work-related dinners with clients, bond roadshows, or big closing dinners for deals I had worked on.  One time I met the mother of a young man I was seeing there for a drink, when she was in town to attend an auction where one of her father’s paintings, a minor Van Gogh, was being sold.  But mostly I didn’t go to '21' that much, since I preferred to spend my evenings with friends my age in younger and racier watering holes. 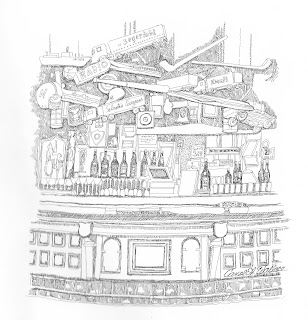 Yet another view of the bar at '21'
Image courtesy of same
A number of years ago Boy and I decided to take his best friend from college and his (then) wife out to dinner to celebrate his friend’s fortieth birthday.  We decided that '21' would be a suitably grown-up place to honor such a milestone, and so I booked a table for the four of us in the Bar Room, which to me epitomizes the restaurant unlike any of the other rooms available there.  I arrived at the restaurant early, ahead of my dinner companions, and decided to wait for them at the bar.  Given my memories of what the bar at '21' had been like after working hours when I was younger, I was surprised to see that there was almost no one there that evening, with the Bar Room virtually empty of patrons.  According to the barman I spoke with, the crowd of manly-men I remembered clogging the bar after work had mostly dispersed over the years, and was pretty much killed off altogether when the city instituted its no-smoking laws earlier that year.  Contributing to the sparse attendance that evening was the fact it was high summer, one of the slowest times of year for New York’s restaurants.

We had a very good, albeit expensive, dinner with our friends that night, and I was glad to see that the Bar Room’s tables filled up over the evening.  My fears that '21' was in its death-throes appeared to have been unfounded.

I had not returned to '21' since that dinner, more than five years ago, but did so for the first time several months back when I booked a table for a pre-theater dinner on the evening that Boy and I had such an unpleasant experience attending A Little Night Music, which I wrote about in an earlier posting.  I was curious to see what I would find.  In the meantime '21' had received a flurry of publicity when it became the last restaurant in Manhattan to relax its requirement that men must wear a jacket and tie for admittance.  Today it remains one of the few that still requires men to wear jackets, and “encourages” them to wear ties, at least for dinner.  In other words, it’s still a grown-up kind of place, holding on to customs that in other parts have gone the way of the dinosaur.  When I arrived, a handful of tables in the Bar Room were occupied with pre-theater diners, and there were perhaps half a dozen patrons standing at the bar, all middle-aged men . . . like me.

Individual cocktail mixing spoons from the bar at '21'
Given to me by Tara, the martini goddess
Since I was the first of my party to arrive, I sidled up to the bar and ordered a martini from the woman working behind it, expertly mixing cocktails.  I fell in to a conversation with her, and learned that her name was Tara and that she broke the sex barrier at the club when she became its first female bartender several years earlier, much to the initial consternation of the guys, all of whom have come around in the meantime.  If there is one restaurant in New York that I would expect to serve a perfect martini, it would be '21' (along with the Four Seasons, the other leading contender, in my view).  I am pleased to report that Tara gave me the most perfectly made martini that I can recall being the happy recipient of. Off to a good start!  While she went about her duties I listened in on several of the conversations that my fellow companions standing at the bar were having and heard more than one of them say “I remember the first time I came to ‘21’, it was when I was still in college . . .” and I realized yet again that Reggie’s life experience is but a mere repetition of the many, many thousands that have trod a similar path before him.

As my fellow blogger Lindaraxa wrote in her charming reminiscence of '21' http://lindaraxa.blogspot.com/2010/01/21-club-chicken-hash-with-gruyere.html, one doesn’t go to '21' for the food, really.  It’s more for the experience of the place.  While the food is perfectly good, and quite tasty, it is not particularly memorable. But then it needn’t be, in my view, because the pleasure I take in dining at '21' (and I have been there several more times since Boy and I ate there two months ago), is the sheer joy of being there, experiencing it, and seeing the place in action.

'21' is a very well-run establishment that caters to a well-heeled crowd of appreciative regulars.  There is a clear hierarchy among the staff, starting from the suit-wearing men and women who greet you as you enter the restaurant.  They are solicitous and formal, and address you by name.  They hand you off to a tuxedo-wearing waiter who shows you to your table and attends to your needs for the rest of the evening.  The waiters are, in turn, supported by an army of assistants wearing white jackets and black bowties.  When the restaurant is full, which it has been the times I’ve been there, and the staff is in full throttle, there is electricity in the air.  '21' is still a manly kind of place after all these years, catering to manly-men and the ladies who like ’em that way.

Adding to the pleasure of dining at '21' is the presence of the bold-face names you sometimes see there, such as a retired big-time ball player, or a tycoon, or . . . Henry Kissinger, who made a spectacular entrance to much hubbub the night Boy and I had dinner there earlier this week.

All in all, it’s a really good show.