Outside and Inside: Spring at Darlington

It was wildly and unseasonably warm today in the Hudson River Valley, in the mid-70's, well above the 50's that are typical this time of year.  The land is coming to life after a particularly brutish winter.  Insects are flying, and there are signs of bluebirds building nests in the houses we've put up for them along the split-rail fence.  Spring is springing at Darlington. 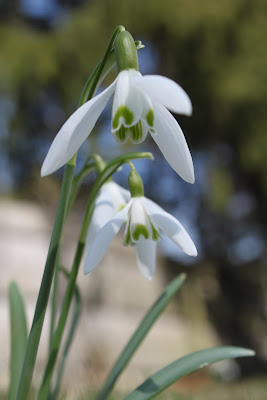 Galanthus nivalis (common snowdrop)
This morning I met with the foreman of our arborists, as we have quite a bit of pruning to do to address the winter damage to the trees on our property.  It's going to take their crew a full day to prune and cable the trees, and they'll need a bucket rig to get high up in them.  Darlington has been hit hard with storms over the last eighteen months. We've lost at least eight mature trees, leaving some gaping holes in the landscape.  One of the trees we lost, a magnificent century-and-a-half-old Quercus rubra (Red Oak), was ripped out of the ground by a tornado last summer and thrown on a neighbor's property.  I still feel sick when I think of it. 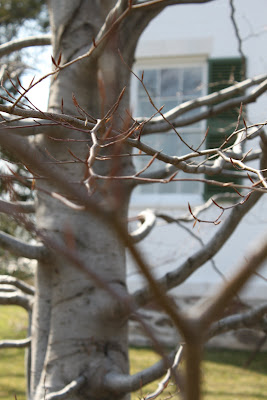 The buds on the Fagus sylvatica (European beech) are plumping up
But moving on to more pleasant thoughts . . . .  Rich and Junior have started the spring cleanup of the property, beginning with returning the gravel they plowed up onto our lawns to the drive where it belongs.  Boy has begun pruning the drift of eleven Hydrangea paniculata 'Kyushu' that we planted six years ago.  It is gorgeous when in bloom, and an amazing honey-bee magnet. 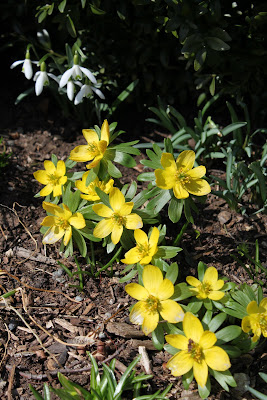 Does anyone know what these yellow flowers are?
These diminutive yellow flowering plants were given to us by my cousin Joanna McQuail Reed shortly after we bought Darlington, when she visited us one spring.  Joanna was a legendary gardener and former president of the Herb Society of America, among many other things, and she and her Longview Farm in Malvern, Pennsylvania, were featured in many books and articles.  She was profiled in Starr Ockenga's marvelous book Earth on Her Hands: The American Woman and Her Garden.  Boy and I enjoy these flowers as a reminder of Joanna, who died in 2002.  We don't know their name.  We remember that Joanna called them something like "winter aconite," but we've not been able to find such a plant in our garden reference books.  If anyone reading this knows what they are, please let me know! 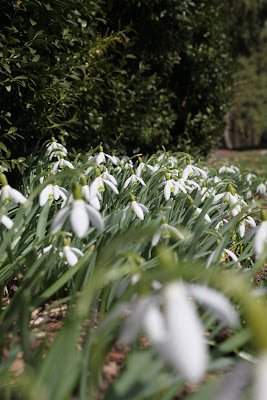 A drift of Galanthus nivalis
When we bought Darlington, the property had a dozen or so flower beds planted in the 1930s and '40s by Mrs. Proctor, the former owner.  While the beds produced masses of pretty, old-fashioned flowers, they were beyond redemption and were also haphazardly placed around the grounds.  We've ripped them out.  The lone survivors of Mrs. Proctor's beds are these Galanthus nivalis, or common snowdrops.  They dot the grounds, and we've extended their presence on our property by dividing and transplanting them over the years.

It's not just outdoors that spring is springing at Darlington. It is happening indoors, too. 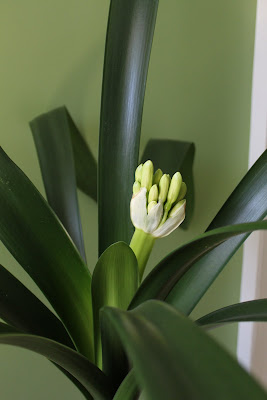 We were given this Clivia by Dennis Mareb, the owner of Windy Hill Farm in Great Barrington, Massachusetts.  Windy Hill is a top-drawer nursery specializing in unusual specimens, and is our primary source for the trees and shrubs we've planted at Darlington.  Dennis and his wife, Judy, arrived at a Christmas party years ago with this Clivia; it has bloomed every March since. 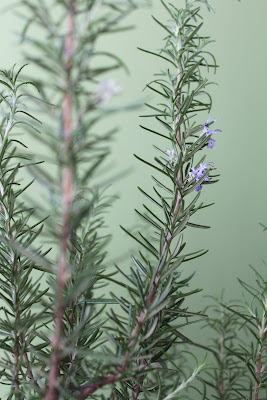 Rosmarinus officinalis in bloom
We have owned this Rosemary for almost a decade, and we learned how to successfully overwinter it indoors from my cousin Joanna.  The key is to leave it outdoors through one or two hard frosts so it goes dormant.  It blossomed last weekend when these little purple flowers appeared.

Moving back outdoors, here's one last shot of our spring landscape at Darlington.  Oh, and there's Pompey, too! 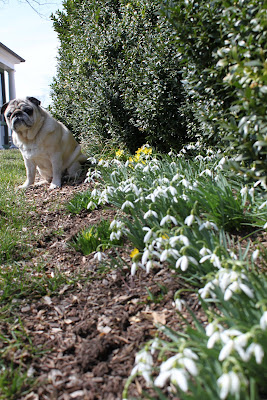 Pug, Buxus, G. nivalis, and the unidentified yellow flower
All photos by Boy Fenwick
Posted by Reggie Darling at 6:27 PM