I first came across images of Sir Albert Richardson's enchanting drawing room at Avenue House in Ampthill, Bedfordshire, in John Cornforth's absorbing book The Inspiration of the Past: Country House Taste in the Twentieth Century published in 1985 by Viking Penguin in association with Country Life magazine.  According to Mr. Cornforth's deliciously informative and lavishly illustrated book, Professor Richardson (as he was also known) was considered to be "one of the first admirers" in England in the early part of the twentieth century "...of the style of the late eighteenth and early nineteenth centuries, as well as one of the principal promoters of the continuity of the classical tradition."  This view is amply borne out by the beauty of his decoration of the Saloon (as it was called) at Avenue House. 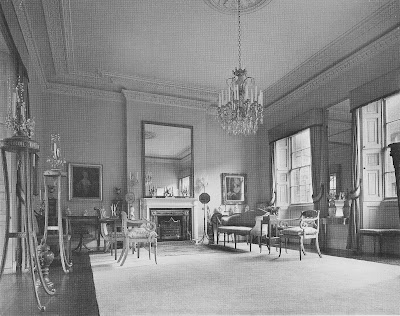 The Saloon at Avenue House in 1934
photo courtesy of Country Life
While many of the rooms shown in Mr. Cornforth's book are beautiful, the image of the Saloon took my breath away when I first saw it and still gives me a frisson of excitement whenever I come across it to this day.  Sir Albert was a true connoisseur and collected many of the furnishings for the Saloon specifically for the room, as opposed to bringing them from other houses that he already owned.  So there is a uniformity of taste and style, rigor perhaps, to the Saloon that is not seen in rooms where the assembled furnishings are more diverse or "eclectic", a word much overused in decorating circles in our day.

According to Mr. Cornforth's book, Sir Albert acquired Avenue House in 1919 and spent the better part of twenty years furnishing it.  And furnishing it he did, exquisitely, with supreme taste and restraint--the true hallmarks of elegance.  While the photographed interior is lovely to look at (the quality of Country Life's mid-twentieth-century photography is mesmerizing), the black-and-white image does not convey the room's color scheme, which, according to Country Life, was as follows: "A greenish grey carpet covers the floor, and grey, too is the colour of the walls, in contrast to which is the purple taffeta, with old-gold filigree used for the window hangings, and the yellow chenille of old French pattern used for some of the chair coverings..."  How I would love to see color images of this room.

So what is it about the Saloon at Avenue House that so vividly speaks to me? 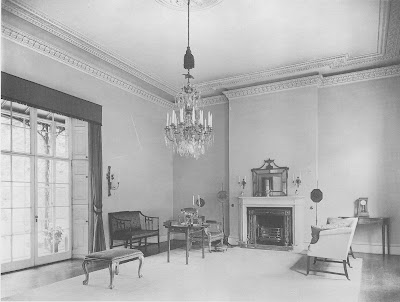 The Saloon at Avenue House in 1922
photo courtesy of Country Life
But it was nearly 10 years later when I first came across this earlier photograph of the same room that I truly came to appreciate what Sir Albert had wrought at Avenue House.  And how fortunate we are that Country Life chronicled the Saloon's transformation from an under-furnished, almost raw, and obviously only-recently-moved-into space into the beautiful swan that it became over the twelve years of Sir Albert's careful attention.  It is in examining, comparing, and studying these two photographs that we come to fully appreciate Sir Albert's academically grounded genius.  (It also appears that the curtains faded considerably in the period between when these photographs were taken.)

Almost all of the rooms we see today in books and magazines (and now on the blogs) are presented as fully realized and "done," giving no indication of the thought, effort, and consideration that went into creating them.  Seeing a room's transformation over time, as we do here with the Saloon,  is a rarity and a treat, and something of great interest to those of us who enjoy the pleasures (and dare I say "process") of interior decoration.  What else would explain the enduring popularity of the "Before and After"--or, as Boy and I call them, the "During and Done"--issues of the often odious Architectural Digest magazine?

I believe that the Saloon at Avenue House is a room that merits careful study and has much to teach us today regarding placement, proportion, symmetry, and purpose.  It is one of my most-admired interiors and has been one of the inspirations for the furnishing of our more modest drawing room at Darlington House.
Posted by Reggie Darling at 8:10 PM