My May 4th posting of "Green Glass" was a popular one and elicted an exchange among myself and Magnus and Lindaraxa, two of my favorite commenters, in which I learned that we three share a love of amethyst glass and an obsession with the (discontinued) amethyst-colored glass water goblets once made and sold by the talented and prolific designer William Yeoward.   In today's posting I will share images of that goblet, plus others of amethyst glass also in our cupboards at Darlington House. 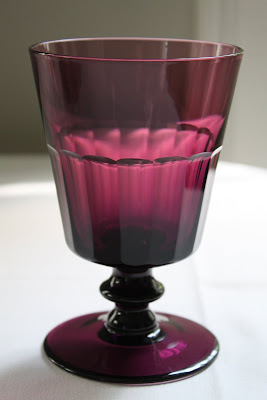 The William Yeoward goblet
We bought our first set of Yeoward amethyst goblets almost ten years ago at Bergdorf Goodman.  Realizing over time that we could use more of them than we had originally bought, we were disappointed to learn that they were discontinued when we stopped into Bergdorf to buy more several years later.  In scouring the city's carriage trade purveyors of china and crystal we found four of them in stock at Scully & Scully on Park Avenue to add to our stash, but we still wanted more.  Several years later we were fortunate to find an additional four of them in London, when Boy stopped into the Yeoward store on King's Road and was able to buy the last ones in the shop's storeroom, from Mr. Yeoward himself.
Amethyst-colored glass is made when manganese is added to molten colorless glass, and is prized by collectors.  The more manganese that is added to the glass, the darker the color, which can range from pale lavender to almost black, depending on the amount of manganese and other elements that are added. 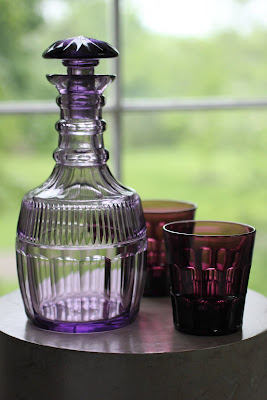 I splurged on the pale purple 19th-century decanter shown in the above photograph several years ago at James Robinson, a super-swell purveyor of antique china, crystal, silver, and jewelry several doors down from Scully & Scully on Park Avenue.  I gave it to Boy as a Christmas present.  It appears next to several tumblers we found in a junk store in Great Barrington a decade ago, for which I've been on the lookout ever since (unsuccessfully) to add to.  Any suggestions as to where I could find more of them would be greatly appreciated . . . We ordered a dozen of these pretty amethyst swirl-patterned glasses from the late, lamented Martha By Mail shortly before it went out of business.  The glasses are shown next to a discontinued reproduction silver glazed pitcher from the Metropolitan Museum of Art.  We enjoy using these glasses and jug for serving drinks in the summer on our screened porch. 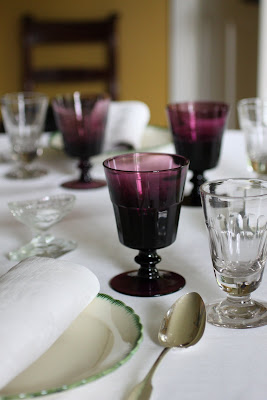 The above photo shows how marvelous the Yeoward goblets look on our dining table, set with period glassware, creamware, and silver.  The goblets look particularly handsome against the snowy white cloth. 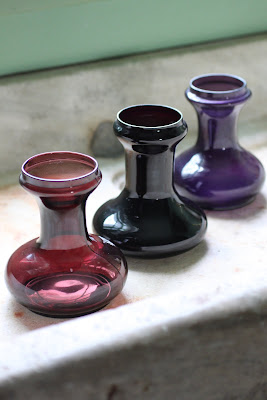 These three bulb-forcing vases are shown sitting in a marble sink in our flower arranging room.  We use them for forcing hyacinths. 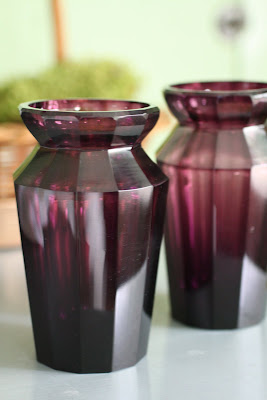 These two cut-glass bulb-forcing vases are much finer than the three ones shown in the marble sink at Darlington House, and are some of my favorite belongings.  It was only after we got them home from the antiques store where we found them that we realized that they, too, were made for forcing bulbs. 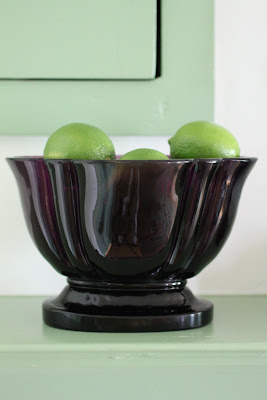 We found this dark amethyst-colored footed bowl at an Antiques Fair in Rhinebeck, New York. 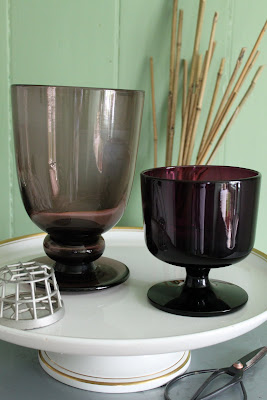 These two amethyst-colored glass vases are shown standing on a Paris porcelain footed plate or stand, the top of which revolves like a "Lazy Susan."  It is a particularly useful aid when arranging vases of cut flowers, since you can spin it around and see all sides of the arrangement. 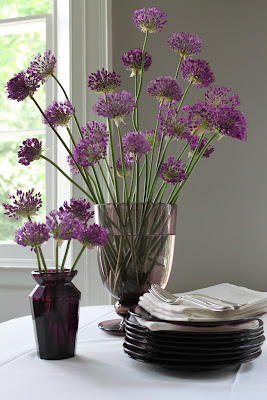 Here is a view of one of those vases and one of the cut-glass bulb-forcing vases, each full of allium flowers that we bought at our local farmers' market last weekend.  They are shown next to a stack of amethyst-colored glass plates, ready to serve dessert.

I, for one, believe one really can't have too much amethyst-colored glass.  It is handsome and works well in almost any setting, from antique to modern.  And the range of colors possible, from dark purple to rosey amethyst to pale lavender, is exceedingly pleasing to the eye.

All photos by Boy Fenwick
Posted by Reggie Darling at 11:45 PM