One of my favorite rooms in America is the Reception Hall at Homewood House, a lovely Federal house in Baltimore, Maryland.  Homewood was built in the first decade of the nineteenth century by Charles Carroll of Carrollton (1737-1832), a signer of the Declaration of Independence and at the time one of the richest men in America.  He built it as a wedding present for his wastral son, Charles Carroll, Junior (1775-1825), who married Harriet Chew (1775-1861) of Philadelphia in 1800.  Originally a fashionable country seat on 130 acres, Homewood House today is the centerpiece of the Homewood Campus of Johns Hopkins University.  The University meticulously restored the house in the 1980s and operates it as an historic house museum, open to the lucky public. 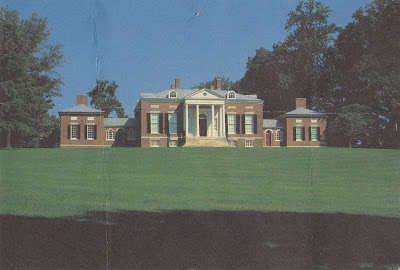 Homewood House, Baltimore Maryland
Image courtesy of same
Boy and I first visited Homewood House in the late 1990s, shortly before we bought Darlington House.  We were dumbfounded.  Not only had the building been beautifully restored by Johns Hopkins, but its rooms were exquisitely and perfectly furnished with the loveliest of period antiques and furnishings, befitting the house's elevated heritage.

While all of Homewood's rooms are lovely, the one that I revisit again and again in my mind's eye is its sublime Reception Hall. 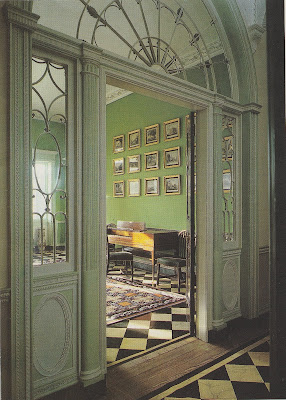 View into the Reception Hall
Image courtesy of The Magazine Antiques
When touring Homewood House one enters the Reception Hall through a beautiful, leaded glass, windowed interior doorway.  The Hall's walls are dramatically painted a gorgeous, vivid, grassy green.  In contrast, the trim is painted white, the baseboards are painted to resemble black marble, and the doors are grained mahogany.  The floor is covered with a canvas floorcloth, strikingly painted with a white-and-black diamond faux-marble pattern.  On it sits a reproduction Brussel's carpet, made for the room from a pattern of 1807. 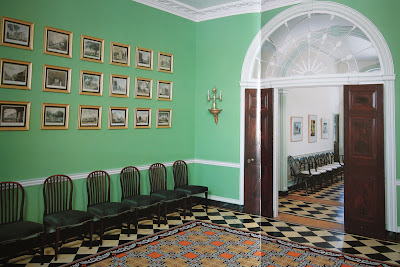 View of the Reception Hall
Image courtesy of Homewood House, by Catherine Rogers Arthur and Cindy Kelly
The Johns Hopkins University Press, Publishers, Baltimore and London
(note, the color of the walls reads more blue in this photo than is the case)
One of the room's walls is covered with a collection of eighteen of William Russel Birch's first edition of Views of Philadephia, c. 1800, framed in eglomise mats and gilt frames.  Against the periphery of the room sit ten English mahogany chairs, c. 1790, sleekly upholstered with green haircloth. 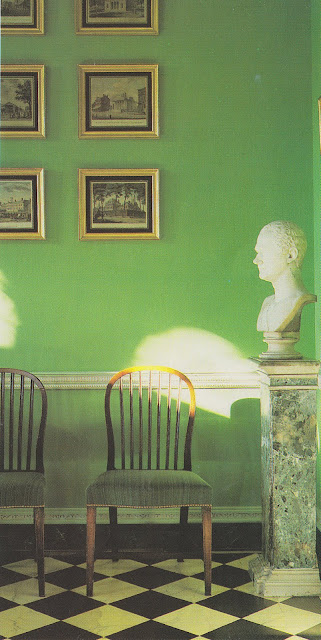 Detail of the Reception Hall
Image courtesy of The Magazine Antiques
(note, this is a closer approximation of the Hall's actual green color)
The Reception Hall contains several noteworthy sculptures, including a marble bust of Alexander Hamilton, after one by Giuseppe Ceracchi, and a nineteenth-century bronze copy of a fifth-century B.C. bust by the Greek sculptor Polyclitus. 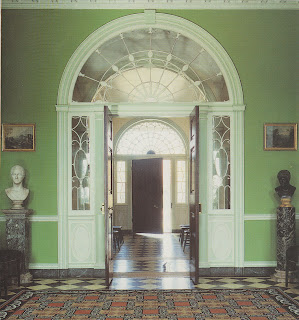 View from the Reception Hall through the back hall to the door to the garden
Image, courtesy of The Magazine Antiques
Homewood House's Reception Hall was designed to be used for multiple purposes.  It could be used for dancing or dining, and in the summer may have been one of the coolest rooms in the house.  Front and back doors open to take advantage of breezes that would have made it more comfortable on a sultry Baltimore evening. 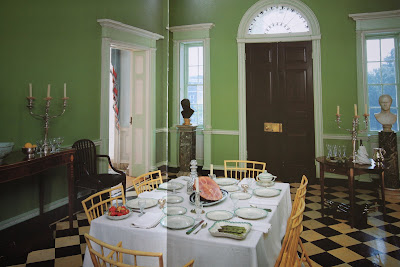 The Reception Hall set up for dining in the summer
Image courtsey of Homewood House
Along one of the Reception Hall's walls stands a mahogany and inlaid sideboard, or slab table, a piece of furniture frequently seen in halls in grand houses of the period.  Above it hangs a beautiful gilt-framed convex mirror. 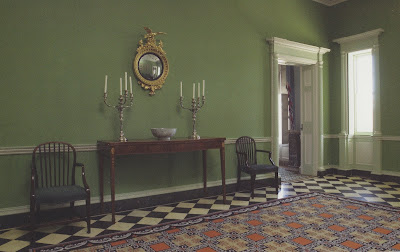 The Reception Hall, showing the sideboard wall
Image courtesy of Homewood House
So what is it, exactly, that excites me about Homewood House's Reception Hall?
But, I must confess, it really is the green of the room's walls that makes me weak at the knees.

The green paint used in the Reception Hall was an important statement of the Carrolls' status.  Green pigment had been difficult to achieve successfully until the discovery that copper oxide would yield a green pigment that remained true.  New and fashionable at the time Homewood was built, green paint was very expensive.

Boy and I fell in love with the green of Homewood's Reception Hall, and we took away with us a chart of Homewood's restoration paint colors that was available when we visited the house more than a decade ago. 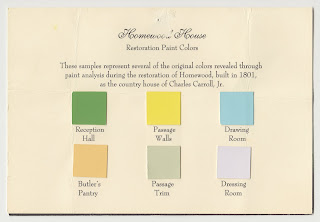 Homewood House's paint colors
Shortly after visiting Homewood we acquired Darlington House, all of whose rooms were covered with mid-twentieth century wallpaper at the time we bought it.  In planning what we would do at Darlington, which is also a Federal period house, we thought we would paint our much smaller and far less grand hall the same green color as the one at Homewood.  Imagine our surprise when we stripped Darlington House's hall of its wallpaper and found that it had originally been painted almost the same green as the Reception Hall at Homewood House.

Here is a photograph of the stair in our hall at Darlington House, showing the walls in their unrestored state: 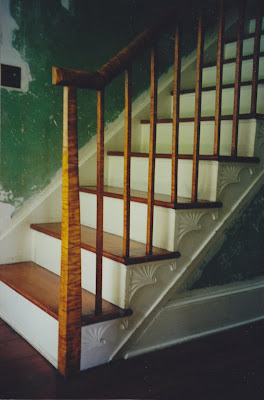 Darlington House's hall, prior to restoration
photo by Reggie Darling
We have since restored Darlington's center hall walls to their original vivid, grassy green color, based on analysis of the paint that had survived 180 years of multiple redecorations of the room.   You can see images of the restored hall here and here.