An Embarrassment of Riches

Yesterday Reggie was flattered beyond belief when Little Augury, one of the most elegant and interesting lifestyle and design blogs out there, and a daily "must read" for yours truly, bestowed upon Reggie Darling two--that's right, two--blogging awards.  One, in and of itself, would be an honor; two makes me blush with the hot flush of both intense pleasure in such accolades, and an uneasy nervousness that it is all too much too soon for such as I, a relative neophyte in these environs, confusedly stumbling midway along the path of  life much as Dante did years ago. 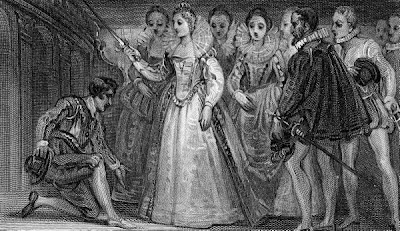 Little Augury Bestowing Awards on Reggie Darling
(via Queen Elizabeth Knighting Admiral Francis Drake)
source: LIFE Images
The first award Little Augury gave to Reggie was a "Prolific Blogger Award," which she defines as recognizing " . . . one who is intellectually productive, keeping up an active blog with enjoyable content."  The honor of such an award requires the recipient to "pass it forward to seven other deserving bloggers," referred to as "the Magnificent Seven."

Now Reggie is quite pleased to be recognized as "prolific" in his output, for he does toil away at RD almost every waking hour that his day job at the Investment Bank doesn't consume him (or distract him from his more gratifying efforts writing said blog).  However, I do believe certain of my readers would take exception to the word "prolific," and consider-- perhaps--"garrulous" as a more apt description of his excessive blather.  In any event, Reggie is most charmed and honored to receive such an award, and gladly shares with you, Dear Reader, his own Magnificent Seven of daily must-reads that inspire, amuse, educate, and at times confound him.  They are, in alphabetical order:


Admiral Cod
Little Augury (surprise!)
Mrs. Blandings
The Blue Remembered Hills
The Blushing Hostess Entertains
The Corinthian Column
The Down East Dilettante
These are the first blogs that I check into daily, hoping for new postings to luxuriate in reading, examining, and pondering, and I commend them to you to do the same.  Should you, Dear Reader, track back to LA's posted awards ceremony, you should not be surprised to find some repetition of certain names that also appear on her list.  For we are, I posit, fellow travelers, LA and I.  Therefore, those of you identified above that are doing double duty may rest on your laurels and sit back and enjoy the adulation without the need of  passing on the torch--again.  But those of you who are anointed for the first time by yours truly, and you know who you are, are, I am afraid, expected to feed the Prolific Blogger Award beast and pass on the torch to your own Magnificent Seven.  With recognition comes responsibility.

You may ask, but aren't there other names that Reggie reads daily?  Yes there are, many in fact.  And there are several that Reggie would dearly love to include in the above list, should such magnificence be extended to, say, twelve names.  Those would include Architect Design, Lindaraxa's Garden, Privilege, The House of Beauty and Culture, and The Neo Lifestyle.  There are also several other names that would appear on Reggie's Magnificent Seven list, but who don't because the frequency of their delicious posting is somewhat sporadic, as it is clear their authors have better things to do with their time than post with rabid frequency.  The two that come most immediately to mind in that category are Emily Evans Eerdmans and Frognall Dibdin's Shelves.   And I would be remiss were I not to mention An Aesthete's Lament, the recently departed and greatly missed Zeus of the Lifestyle Bloggers and in front of whom Reggie bows in subservient and glorified worship, yelping admiration. Were Aesthete still posting today he would certainly lead Reggie's list of Magnificent Seven, ahead of all others.

The second award that Little Augury bestowed upon me as one of her Magnificent Seven, which really is a fallout of the first, I suppose, was a "Beautiful Blogger" award for, I suspect, the pretty images that I, from time to time, post on Reggie Darling.  And for that I must acknowledge the contributions of my dear Boy Fenwick, my partner on Reggie Darling and in life.  Boy takes most of the photographs that appear on RD, and is a frequent inspiration for the blog's content.  He also edits Reggie's scribbles to ensure that they are not embarrassingly ungrammatical.  This is, indeed, a collaborative effort.

But there is a catch with this second award, which Reggie also bestows upon his own list of Magnificent Seven (take note!), and that is it requires that one must share seven facts, heretofore unknown, about oneself with one's own Dear Readers.  And so here are Reggie's:
So, there you have seven heretofore unknown facts about Reggie Darling.  Are you surprised?  I rather doubt it . . .

In closing, I would like to thank my dearest Little Augury for these lovely awards.  I am indeed flattered.  And to my own Magnificent Seven I now say: get to work!
Posted by Reggie Darling at 8:35 AM