Several weeks ago I decided to surprise Boy one evening by secretly inviting two friends of ours, Lowell and Courtney, to join us at a cooking class held one evening by the inestimable Gail Monaghan here in New York.  Gail, a cookbook author and all around genius in the kitchen, teaches cooking classes out of her art-filled loft in lower Manhattan, and also runs luxurious culinary tours of exotic locales.  I plan on featuring Gail and one of her cooking classes in a future posting.

I invited Lowell and Courtney to join us as a surprise treat for Boy, since we both enjoy their company, and I thought that they would appreciate meeting Gail and joining us at one of her classes.  We had a lovely time with Lowell and Courtney that evening, and they hit it off with Gail as well, with whom they share a love of cooking and contemporary art.

Shortly after attending the class we received a thank-you note written by Lowell that stands out, in my mind, as exemplifying the craft of such missives, and which I am sharing with you, Gentle Reader, as an example of that which to aspire to when writing such communiqués. 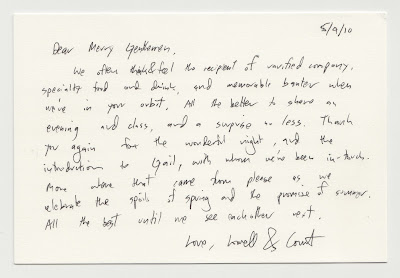 So what is so noteworthy (pun intended) of this note?
All in all, it is one of the best thank-you notes that I have received in a long time.  Gentle Reader, I commend it to you as an example to aspire to when writing such notes when you have been the happy recipient of a host's hospitality.  Following its format will ensure that its reader will remember your acknowledgement and good manners with pleasure, and will favorably incline them to invite you, again, to future festivities.  It is a gold-star example of such missives and the successful realization of rule number one of Reggie's Rules of Social Reciprocity.

This is not the first time that Lowell and Courtney have been referred to on Reggie Darling; you can read more about them in a post I did here.
Posted by Reggie Darling at 7:27 AM