The Pompey Chronicles, Part III: For the Love of Pompey

The is the third and penultimate installment in my series of essays on Pompey, our most-beloved pug.

The Scamp was born on May 12, 1999, and we picked him up on a sunny Saturday afternoon eight weeks later at a dog show in Newburgh, New York, where his breeder was showing.  My life changed forever that day, because that is when I fell irretrievably and irrevocably in love with our delightful and most-beloved pug, Pompey.  For that is the name he came home with at the insistence of my mother, who came up with it. 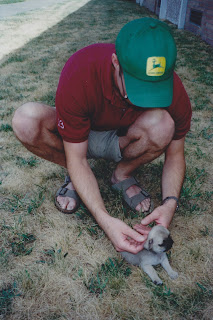 Boy with Pompey at the Dog Show on
the day we picked him up from the breeder, July 1999
Boy and I had come to the dog show prepared with a collar for Pompey, but when we met the breeder and showed her the collar (a very smart one, I might add, that we had carefully selected at a carriage-trade shop in the City), she burst out laughing and said, "Well, he might grow into it someday!"  For, as we found, he was still quite tiny, just a wee, wobbly, bobbly pug puppy, still no larger than an average sized kitten.  We learned that his brothers had further eclipsed him in size and were expected to grow into full Alpha-male standard size (that is, if a pug could ever be considered an Alpha dog), but that our little Pompey was destined never to exceed the size of an adolescent.  In other words, we were the proud owners of the runt of the litter. 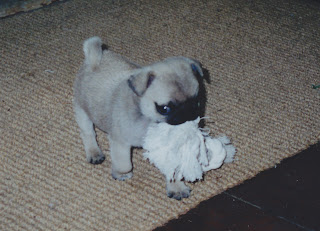 Pompey's first day at Darlington
And true to prediction, Pompey weighs only 14 pounds at full maturity, right at the absolute bottom of the breed standard of 14 to 18 pounds (for both dogs and bitches), and about the same as a medium sized male cat.  Most of the pugs I see on the street weigh rather a lot more than the breed standard (along with the rest of America), so relative to many of the pugs we come across when out for a walk, Pompey is quite small.  We have kept him in good shape and carefully regulate his food intake (I find it is easier to control his diet than mine), so he has a nice figure, retaining a good tuck.  To this day, as he approaches his eleventh birthday, we are often asked if he is a puppy. 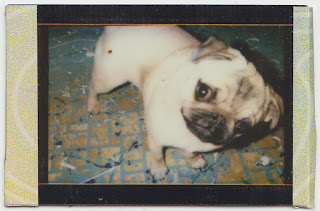 Pompey visiting Sister Darling
Since bringing Pompey home with us we have learned the following about pugs: 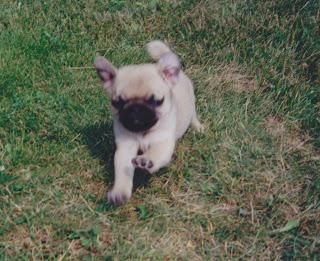 "Here I come to save the day!"
Did I tell you that Pompey is actually a remarkably good-quality pug?  It's true, and through no fault of mine, even though I was the one who found him.  As I wrote in a previous installment of the "Pompey Chronicles," I began my search with the Pug Club of Greater New York, and fortunately I was directed to a breeder that I later learned was considered at the time to be one of the top breeders of pugs in America, with dozens and dozens of champions to their credit, including several best-of-breed winners at Westminster.  I had no idea; I just thought I was buying a pug puppy. 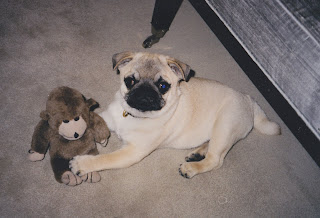 Pug on a rug
It started to dawn on me several months after we brought Pompey home that he was actually a very nice looking example of the breed's standard, despite his diminutive size.  At first I thought it was perhaps pride of owership (doesn't every parent consider their child to be "gifted" these days?), but Boy and I started to suspect that Pompey was really quite good, particularly for a "pet-quality" pug, and in fact better than almost every other pug we had come across when out and about. 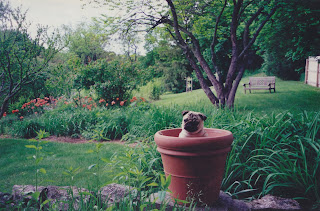 Pug in a pot
This was confirmed shortly thereafter when we attended a party at the National Arts Club here in New York that was thrown to celebrate the publication of a book called Pugs in Public, by Kendall Farr, and where more than sixty pugs had been invited to attend the party, including our Pompey.  As we walked through the chaos of pugs and owners in the main room at the club a voice boomed out across the throng "Bring that pug to me right now!" clearly referring to our little Pompey.  The command came from an imperious-looking older woman who was seated in a chair, banging her cane on the floor, demanding our attention.  We did as we were told and walked over to her.  She picked up Pompey and examined him like a trainer looking over a horse for the first time.  After a bit she looked up at us and said, "This is the best pug here today, and the only one with true championship potential!  I'd recognize him anywhere, he's from Such-and-Such kennel, isn't he?"  We were astonished that she knew the breeder just by looking at Pompey, and asked her name.  I was even more surprised to learn that she was, in fact, the very secretary of the Pug Club of New York with whom I had spoken when I first initiated my search! 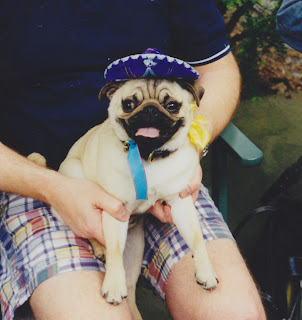 Pompey's first birthday
Sombreros and pinatas, anyone?
Once Pompey joined our household he quickly established himself as a member of our family, and in many ways he completed it (as pets often do for childless couples).  Boy owns his own business and most days takes Pompey with him to the office, where he has become the firm's mascot, something that would have been impossible at the Investment Bank where I work.  I usually get home after they do, and there is no greater pleasure for me than when I open the door to our city apartment after a long day and Pompey runs up to greet me, demanding to be picked up and kissed.  He and I both enjoy sitting together on the sofa, snuggled up while watching television or reading, and I'm sure that bedtime would be lonely indeed if it didn't include our little bundle of puginess to share it with.  I particularly enjoy hanging out with him during weekends at Darlington.  He is very affectionate and loving, remarkably even-tempered and good-natured, and an all-around wonderful companion.  I miss him when we go away on a trip and have to send him to a boarding kennel, and I look forward to reuniting with him when we return.  In short, I adore him. 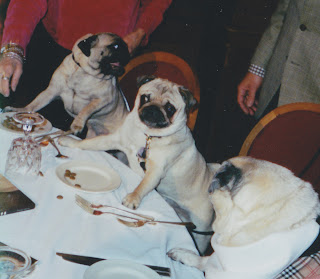 Another pug party held at the National Arts Club
I have found that one of the pleasures of owning a dog is experiencing them at every stage of their lives, from puppyhood through adolescence, maturity, and then finally old age. We have enjoyed the first three stages of Pompey's life and we are now just beginning the fourth and final stage.  Pugs live on average twelve to seventeen years, so we can expect at least several more years of his company, and I hope many more.  But there is no denying that he is starting to slow down just a tiny bit.  Not much, really, but I can see signs developing.  There is a greater tendency to hesitate at a stair, a wish to go back inside sooner from a walk, and not quite as much bounce in his trot.  To the casual observer these signs would be imperceptible, but I can see them.  And it is with a certain poignancy that I do so, as they are a reminder that I have fewer days of his company to look forward to than I have to look back upon.  Knowing this is all the more reason for me to cherish him as I do.  I know that I will be bereft when I no longer have the joy of his company, my most-beloved Pompey.  I do so love him. 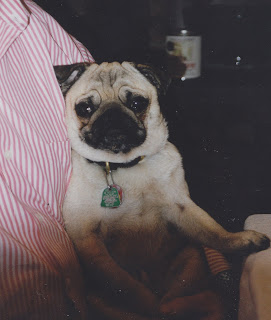 Pompey in my arms
But for now I look forward to years more of his company, and I plan on making the most of it, never taking it for granted.  To that end we've decided to bring Pompey with us to the beach house we've rented for two weeks this summer, because we can't bear to be parted from him for that long.  Besides, he's never been to the beach before, and we want to see what he makes of it. 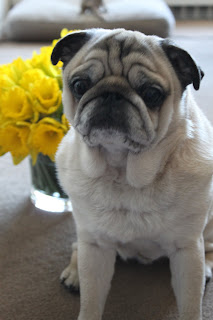 Pompey in maturity, taken this morning
But we're not the only ones who find our little Pompey adorable, or photogenic.  Over the years he has appeared in quite a few magazines and books, mostly in stories shot at Darlington House.  I plan on featuring a number of those images in my next and final installment of this series.

Next week: Pompey, the Published Pug