A Peale, a Plant, and a Pot

There are certain paintings and works of art that I return to again and again, and where each time I do so I experience a thrill of discovery reminiscent of the first time my eyes were so fortunate as to have gazed upon them.  In other words, they resonate with me.  I plan to write about these works of art from time to time here on Reggie Darling. 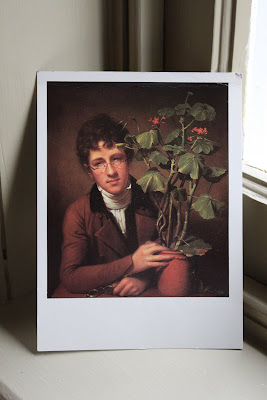 Rubens Peale with a Geranium
Painted by Rembrandt Peale, 1801
National Gallery of Art, Washington, D.C.
The first work I will discuss is the charming portrait of Rubens Peale with a Geranium, painted in 1801 by his brother, Rembrandt Peale.  I know that I am not alone in appreciating this painting, one of our Nation's treasures.  It is in the collection of the National Gallery of Art ("NGA") in Washington, D.C., an exquisite museum that the astonishingly philanthropic Mellon family gave to the people of America.  Reggie has visited the National Gallery many times and always seeks to return to it whenever he finds himself in Washington, D.C., a city he lived in as a boy. 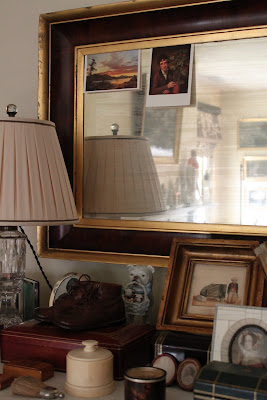 Reggie's chest of drawers and mirror at Darlington House
(note postcards in mirror frame)
photo by Boy Fenwick
I am so fond of the painting of Rubens Peale with a Geranium that I have a postcard of it that I bought at the NGA tucked into the frame of the mirror that hangs above my chest of drawers at Darlington House.  I enjoy the close proximity of the image when I find myself in the room, going about my domestic business.

The portrait of Rubens Peale (1784-1865) was painted at the dawning of the nineteenth century by his brother Rembrandt Peale (1778-1860).   The sitter and painter were sons of the celebrated American artist and naturalist Charles Wilson Peale (1741-1827), who named several of his many children after famous painters.  Rubens was an aspiring botanist at the time his portrait was painted, when he was only seventeen years old, and later went on to pursue careers as an artist, like many in his family, and as a director of the Peale family museum.  He is depicted accompanied by a potted geranium, which was an exotic rarity in America at the time his portrait was painted.  Rubens is shown both wearing and holding a pair of metal-framed spectacles, with his hand resting on the clay pot of the plant.  This, I believe, subtly conveys the visual and tactile pleasure he takes (or is it took?) in examining and touching his (for the time) unusual potted plant.  It is a most pleasing portrait, the composition of which is more interesting for the prominence of the potted geranium than what is seen in another portrait of him that his brother painted six years later: 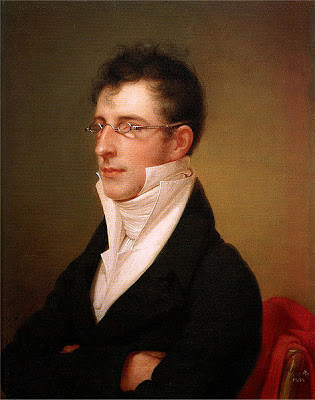 Rubens Peale
Painted by Rembrandt Peale, 1807
The National Portrait Gallery, Washington, D.C.
Don't get me wrong, I believe the later portrait is wonderful, and exceptionally well-painted; it is certainly a work of art that I would be more than proud to hang at Darlington (the handling of the collars and neckerchief is particularly masterful).  However, I am more drawn to the earlier portrait, an American masterpiece, because it conveys a narrative that extends beyond the mere depiction of the sitter.  I also like the fact that the earlier portrait shows Rubens accompanied by something as unexpected and charming as a flowering geranium, of which he is justifiably proud, for it is a handsome specimen, indeed.
s 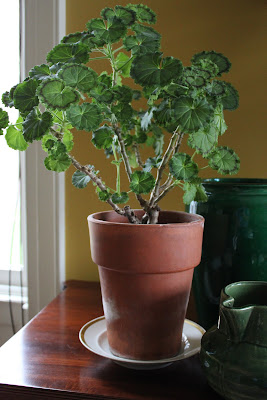 Our potted heirloom geranium
photo by Boy Fenwick
Given my affinity for Rubens Peale with a Geranium, it is not surprising that I own a geranium planted in a clay pot, inspired by the painting.  Although mine is clearly not the same type as Rubens Peale's, it is a fragrant heirloom variety bought from a dealer who specializes in specimen plants, and it flowers with similar small red blossoms as the geranium depicted in the painting

As I was writing this essay I realized that the clay pot shown in the above photograph is but a sorry vessel for my geranium when compared with the one in Rubens Peale's portrait, and that I should endeavor to repot it more sympathetically.  I recalled that I had seen a clay pot inspired by the one in the painting when I visited the Trade Secrets annual spring garden sale last year in Sharon, Connecticut.  At that show the talented and prolific contemporary potter Guy Wolff had a booth where he was selling, among other things, a pot modeled after the one in the portrait of Rubens Peale, which he called "the Peale Pot."  We have many clay pots at Darlington made by Guy and his potter son Ben, and have collected them for years as they are handsome and beautifully made.

I decided to expand the focus of this essay to also include a road trip to visit Guy Wolff's studio where I hoped to buy one of his Peale pots to repot my geranium, so that it would more closely resemble the one in the painting of Rubens Peale.  I called the studio and was pleased to speak with the master potter himself, and learned that he had many of his Peale pots in stock to choose amongst, should I stop by his shop that weekend.  So Boy and I fired up the Rover that Saturday morning and drove over to Connecticut on a mission to visit Guy Wolff's studio and buy a pot or two. 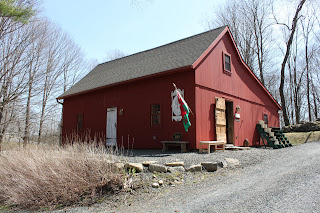 The Wolff Pottery studio and shop in Bantam, Connecticut
photo by Reggie Darling
Guy Wolff's studio and shop is located on Route 202 in Bantam, Connecticut, several miles south of Litchfield, and a pleasant 90 minute drive from Darlington House.  The shop was manned the day we visited by Erica Wolff--Guy's wife--and their daughter Elizabeth.  The Wolffs offer many different styles and sizes of pots to choose from, and there was a healthy stream of people stopping by their shop the early spring Saturday we visited.

photos by Reggie Darling
Right inside the door of the shop we found the inspiration for our trip--a stash of Peale Pots in various sizes.  Eureka! 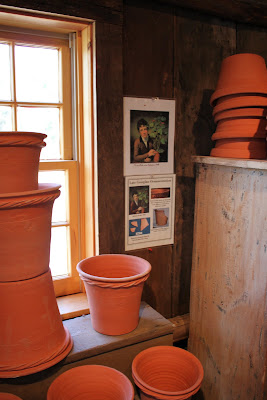 A selection of Peale Pots
photo by Boy Fenwick
While we were there we were also enchanted by the other pots on display, and chose several non-Peale pots to also add to our collection of Wolff pots.

Pots thrown by Guy Wolff and his son Ben Wolff
photos by Boy Fenwick
We fell in to a pleasant conversation with Erica Wolff and explained to her how it was that we came to visit the studio that day, namely to purchase a Peale Pot.  When she learned of our regard for the painting of Rubens Peale, she smiled sweetly and said that she had something that we just might like to have, and then disappeared. 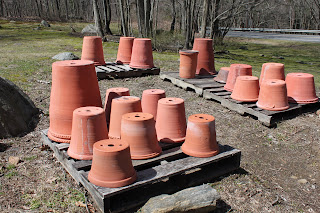 Large clay pots curing in the sun
photo by Reggie Darling
She returned several minutes later carrying a small bottle containing what appeared to be geranium shoots, taking root.  But these were no ordinary geranium shoots.  According to Erica, Rubens Peale apparently gave Thomas Jefferson, a man who shared his interest in botany, a cutting from his geranium plant as a gift around the time his portrait was painted, and the geranium shoots in her bottle were descended from the very plant depicted in the painting.  She said that Monticello's horticultural curator contacted them shortly after her husband started producing the Peale Pot with the news that Monticello had a descendant of that geranium in their collection, and that the Wolffs were welcome to a cutting of it.  Erica Wolff then proceeded to give us one of the shoots, much to our astonishment and joy! 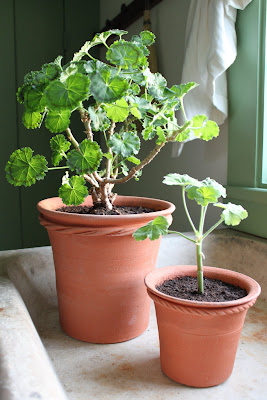 Our Peale-Potted Geraniums
photo by Boy Fenwick
Here is a photograph of our newly-repotted geranium, and also the cutting Erica Wolff gave us that we have potted in a smaller Peale Pot.  Both pots were made by her husband, Guy Wolff.  I am very pleased to have found the appropriate pot for our geranium, and absolutely thrilled to now have a cutting from the descendant of the geranium depicted in Rubens Peale with a Geranium.  Thank you, Erica Wolff.
Reggie believes that he is a very fortunate man, indeed.
I encourage my readers to investigate Guy Wolff's interesting and informative website, where he has examples of his work for sale, plus his show schedule.  While there be sure to click on the link to his potter son Ben Wolff's website, too.