On Thursday evening Boy and I attended a cocktail reception at Doyle New York, the Manhattan-based auction house, to preview the sale of the Elinor Gordon Gallery Collection of Chinese export porcelain.  Mrs. Gordon, as many of my readers will know, was this country's preeminent dealer of Chinese export porcelain for more than fifty years, exhibiting at antiques shows and dealing out of her famous shop in Villanova, Pennsylvania, to a loyal following of collectors and curators of art museums and historic houses.  Among her many distinctions, Mrs. Gordon was the longest-running exhibitor at the toppest-of-the-top-drawer Winter Antiques Show here in New York City, beginning with the very first show in 1954, and also at the Philadelphia Antiques Show, beginning with its first show in 1962.  Mrs. Gordon died at the impressive age of ninety-one in July of last year.  The bulk of her personal collection was consigned to Sotheby's and sold this past January; Doyle was given the contents of her famous shop to auction this coming Tuesday, April 13th. 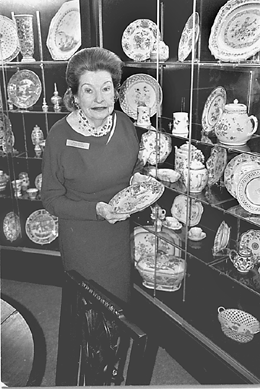 Elinor Gordon in the 1980s
photographer unknown
I first laid eyes on the venerable Mrs. Gordon more than ten years ago when Boy and I attended the Hospital Show, which the Philadephia Antiques Show is also known as since it raises funds for the benefit of the Hospital at the University of Pennsylvania.  We were having lunch at a table in the Armory where the show was held at the time, enjoying a break from prowling the booths.  We noticed that a huge overhead utility door that opens one end of the armory for trucks and tanks was slowly being raised, and a commotion of people were preparing for what was about to happen.  As the door rose it revealed a regal-looking woman "of a certain age" dressed in a cloud of pink and seated in a wheelchair.  Once the door was raised sufficiently for her to be wheeled in, our curiosity was further peaked when we watched her impatiently motion to the two men who were assisting her to let her stand up, rather than have herself pushed in.  She stood, shoved the wheelchair aside while grabbing the arms of her escorts, and stiffly walked into the Armory, acknowledging the greetings of those surrounding her.  It was almost as if we had witnessed the birth of Venus! 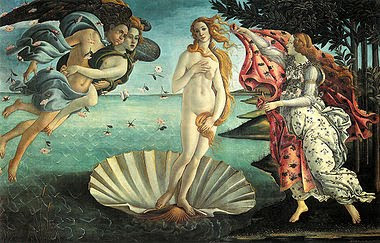 The Birth of Venus, by Sandro Botticelli, c. 1486
Uffizi Gallery, Florence
Not only did we take the spectacle in with pleasure, but we were delighted to see that this apparition was dressed to the nines.  She wore a fabulous, light-weight, pink mohair princess-cut spring coat decorated with overscaled buttons, right out of a Jackie Kennedy ensemble designed by Oleg Cassini when she was First Lady.  In addition to her lovely outfit, our Venus sported a perfectly coiffed and upswept bouffant hairdo from the same era.  She was wearing matching pink leather gloves and what appeared to be a pair of Seaman Schepps shell-and-diamond earrings.  We loved it! 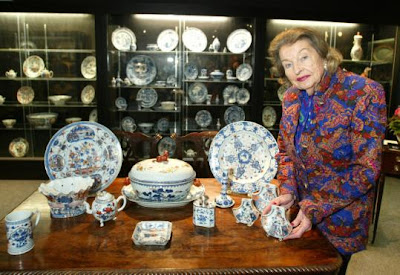 Mrs. Gordon shown in her booth at the 2003 Winter Antiques Show in New York
photo by Nicole Benjiveno for the New York Times
Soon thereafter we learned that this Venus was none other than Mrs. Elinor Gordon, the noted dealer of Chinese Export porcelain, when we stopped by her booth and introduced ourselves.  We bought a pair of plates from the late 1700s from her that afternoon. 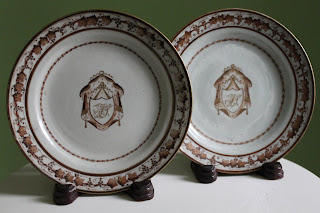 The plates we bought from Elinor Gordon the day we met her
photo by Boy Fenwick
Over the ensuing years we would see Mrs. Gordon at both the Winter Show and the Hospital Show, and we bought additional pieces of export porcelain from her to add to our collection. 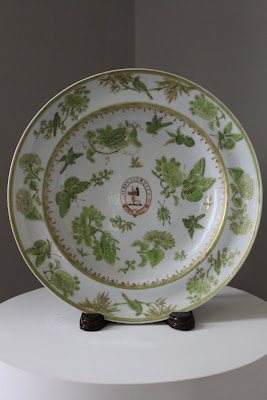 Another plate we acquired from Mrs. Gordon
photo by Boy Fenwick
Mrs. Gordon was a real character and also a bit of a prickly pear, and she yelled at Boy once when he picked up a punch bowl in her booth at the Winter Show.  Needless to say he quickly put it down.  Her gruff demeanor, however, didn't dissuade him from purchasing a particularly pretty plate decorated with birds and butterflies in an unusual chartreuse color, shown above. 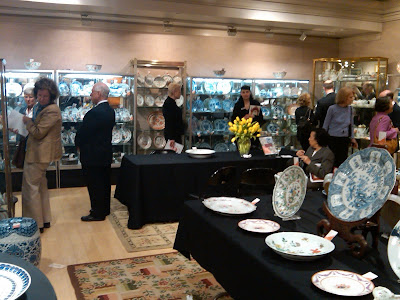 A view of the Elinor Gordon Gallery Collection at Doyle New York
photo by Boy Fenwick
When we received an invitation to attend the cocktail reception at Doyle to preview the contents of Mrs. Gordon's shop, we decided to go and see what was displayed with the idea that we would place a bid if we saw one or two of something we liked.  In addition to offering Mrs. Gordon's inventory, Doyle is also auctioning American furniture and decorative arts in the same sale.  The preview was well attended, and there were plenty of people milling around for most of it, drinking white wine and nibbling on tea sandwiches passed around on silver trays. 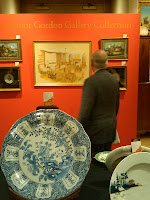 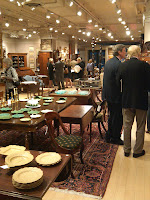 More views of the preview, photos by Boy Fenwick
There was a substantial amount of Mrs. Gordon's inventory on view at the preview, all Chinese porcelain made in the eighteenth and early nineteenth centuries for export to the European, English, Middle-Eastern, and American markets.  The collection included a large selection of blue-and-white pieces, plus examples painted with Armorial, Famille Rose, Famille Verte, Fitzhugh, and other decorations.  We came across several examples that we liked, and left behind bids as we are not able to attend the sale on Tuesday. 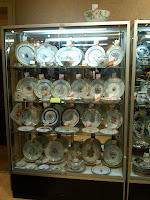 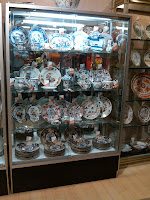 Display cases full of Armorial and Famille Verte porcelains
Photos by Boy Fenwick
The staff at Doyle were very friendly and talkative, and those I spoke with were pleased to learn that I was planning on reporting on our visit to the preview.  We enjoyed speaking with Laura Doyle, a Vice President at the firm, and also Louis Webre, the Director of Media and Communications. 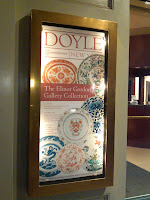 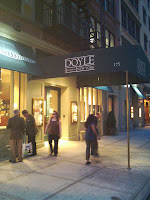 photos by Boy Fenwick
I encourage my readers to view Doyle's online catalogue for this sale.  There are many lovely examples of Chinese export porcelain in it from Mrs. Gordon's inventory, some with remarkably low estimates. 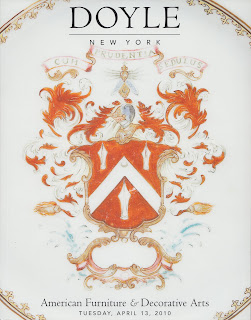 The cover of the catalogue
courtesy of Doyle New York
This is your last chance to acquire something from the shop of the greatest American dealer of Chinese export porcelain of the latter half of the twentieth century.  It is, indeed, the end of an era.

Please note: Reggie is receiving nothing from Doyle New York in return for his reporting on this sale, which he is posting solely for the pleasure and edification of his readership.
Posted by Reggie Darling at 11:35 AM