Reggie Out & About: The Mrs. Charles Wrightsman Preview at Sotheby's

This morning as I was tying my tie and preparing to go to the Investment Bank where I work, Boy asked me if I would like to join him beforehand at Sotheby's opening preview of the contents of the London residence of Mrs. Charles Wrightsman.  I responded, "You bet I would!"  So I emailed my office on my BlackBerry that I had an "appointment" in the morning and would be in around eleven.  Little did they know that my so-called appointment was to attend the Wrightsman preview . . . 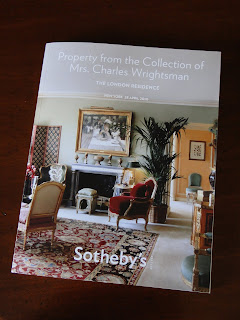 We arrived just as the preview opened (its first day) and were joined by Boy's charming and lovely assistant, Clarissa Montgomery.  We were delighted to have the exhibition rooms largely to ourselves.  Sotheby's has done a marvelous job of displaying the contents of Mrs. Wrightsman's London residence, which occupy the better part of the tenth floor, the floor reserved for the very best they have to offer.  To say the collection on display was gorgeous is a paltry understatement--better yet, it's jaw-dropping.  Almost every piece is exquisite, sublime, and sumptuous--and the perfect realization of the uber-refined taste of one of the greatest of the lady tastemakers of the twentieth century (and one of the last of them still living). 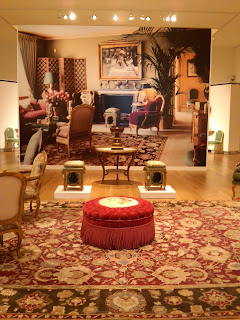 Sotheby's has organized the exhibition by rooms, and they have mounted huge photographs of the actual interiors, beginning with the drawing room, followed by the dining room, library, sitting room, and various bedrooms.  The above photograph is of the drawing room, the first "room" one sees upon entering the preview. 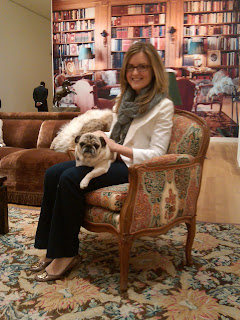 Of course we brought Pompey with us to the preview, since he is--as I have written previously--the mascot of Boy's office and travels with him everywhere.  Above is a photograph of Pompey on the lap of Clarissa, who is sitting in a chair from Mrs. Wrightsman's library.  I am not sure which of the two of them is happier in such surroundings! 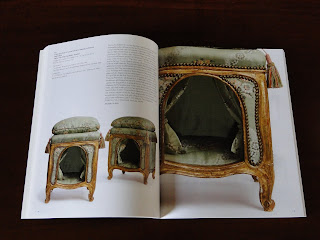 One of the lots that we were looking forward to seeing at the preview was of a pair of diminutive Louis XV giltwood dog kennels forming tabourets, circa 1765, lot number 121.  They sat in Mrs. Wrightsman's drawing room and carry a breathtaking estimate of $25,000 to $35,000. 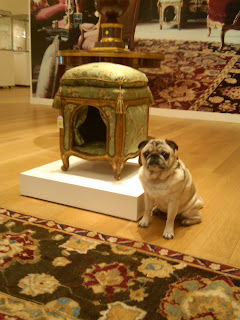 Not surprisingly, Pompey made a beeline for the kennels.  Here he is, staking out his claim on one of them.  He's no fool, that little pug. 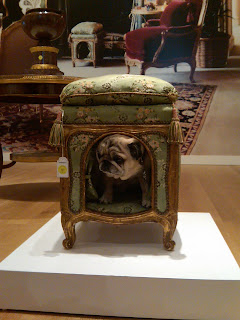 Of course he had to give it a test drive.  However, upon reflection, we all agreed that--even at a mere fourteen pounds or so--Pompey is a bit large for the kennel, which is more appropriately sized for a smaller lapdog, such as a tiny poodle or Yorkshire terrier.

So--much to my relief, given the estimate--we decided to "pass" on the kennels.

I enthusiastically encourage my readers to view the Sotheby's preview of the London Residence of Mrs. Charles Wrightsman, either in person or on Sotheby's website.  The quality of the offerings and their provenance elevate it into the tastemaker auction sales pantheon of the Windsors, Jacqueline Onassis, Bill Blass, Givenchy, Charles de Beistegui, the Whitneys, and the more recent Safra sale.

All photos by Boy Fenwick, by BlackBerry and otherwise
Posted by Reggie Darling at 10:10 PM

Labels: antiques, auctions, collecting, notable people, out and about, Pompey