Last weekend, while flipping through our copy of American Furniture, The Federal Period, by Charles Montgomery, I came across an image of a delicious and extremely rare plant stand, made circa 1810, and attributed to the workshop of Duncan Phyfe.  I had an immediate "I want that!" reaction when I saw the photograph, which I am showing below.  Not only did I appreciate the stand for its pleasing form, but I thought its function as a holder of potted plants was marvelous, and that it would be the ideal stand for my Peale-inspired potted geraniums. 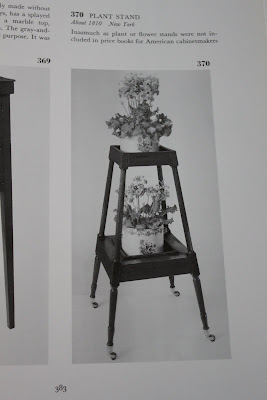 Image from American Furniture, the Federal Period
by Charles Montgomery
We have four pieces of furniture at Darlington House that are attributed to the workshop of Duncan Phyfe, and that were made in the first two decades of the 19th century, the same period as this stand.  Neither Boy nor I have seen an example of such a plant stand in our many travels, which is not surprising, since according to Montgomery they are exceedingly rare.  If one were to come up at auction I would expect it to sell well into the five figures. 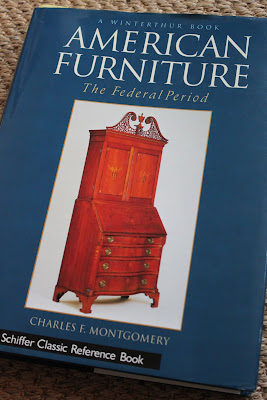 photo by Boy Fenwick
But that doesn't concern me all that much, because I know of a cabinetmaker who is capable of reproducing it for a reasonable price, moldings, patina, and all.  Whilst I certainly prefer to buy first-period whenever possible, sometimes it simply isn't.  I'm okay with buying a high-quality, bench-made reproduction when the original is so rare or costly as to be unattainable, particularly if the reproduction has some age on it.  And, besides, I'm not sure I really do want a period Phyfe plant stand.  That's because geraniums require watering and misting from time to time, and I can't be confident that every person charged with such a task at Darlington House would appreciate how careful they needed to be if the stand were as rare as a period one.

Tell me, do you ever allow yourself to buy good-quality reproductions, or do you always consider period examples as the only appropriate ones to own?
Posted by Reggie Darling at 12:17 AM